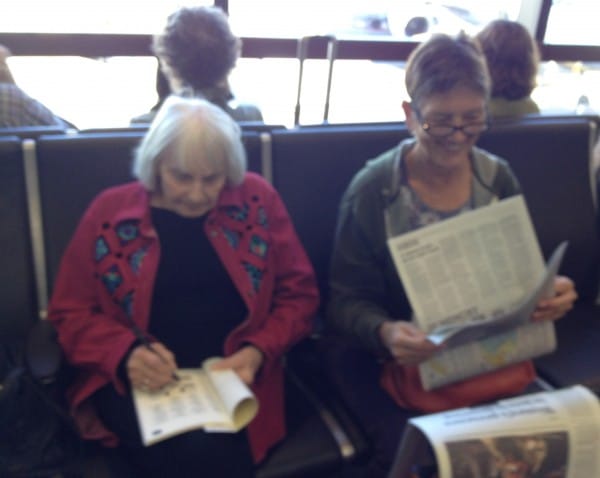 The morning went smoothly. Mom was disoriented when she woke up and had taken all her clothes off in the night, but I dressed her easily and helped her into the bathroom. When it came time to help her into her Depends and lift her off the toilet, I felt nothing but tenderness—and then my whole body sagged in relief. I was no longer that angry teenager or that estranged, distant adult. I loved my mother and I was ready to do this for her. This trip was really going to be okay.

On the drive over to the airport, Mom enjoyed the waning moon, still up high in the sky. She commented on the changing colors of dawn all the way over Highway 17 as we headed north toward San Francisco. I realized that in assisted living, Mom never got to see the early morning sky.

Mom asked Lizzy six times about where she was going to college and if she’d ever driven over the hill before. Lizzy patiently answered every question.

“Mom,” I said, remembering how my father had always talked about our long car trips when I was a child. “This is the first leg of our journey.” Then I described the rest of the trip.

“And where are we going after we see Esther?”

“But I have to fly to Newark from Miami.”

I usually don’t correct her, but this time I felt I had to. “No Mom, you don’t. We’re just flying from California to Florida to see Esther and then back again.”

“But then I have to fly from Miami to Newark.”

“How else will I get home?”

“Mom, you don’t live in New Jersey anymore. You live in California.”

Yes, Mom, you’ve been living in Santa Cruz for the last seven years.

Mom looked perplexed. “Wow,” she says to me, “I’m really losing it.” Then she paused. “Where do I live?”

“You live in Santa Cruz California with me.”

“I do? I don’t live in New Jersey,” she said, as if realizing it for the first time. “Well,” she went on. “If I live in California, I know why I moved there. To be near you.”

Things went well at the airport. We got Mom into a wheelchair and successfully made it through security. We enjoyed a leisurely breakfast and I bought Mom a book of the Easiest New York Times Crossword Puzzles for the plane. But when they started boarding our plane, the second wheelchair failed to arrive. After numerous trips to the desk, finally a man came over to us, but he was calling someone else’s name. When no one responded, we convinced him to take us down the jet way. But then halfway down he stopped. Apparently, when I’d ordered a wheelchair, I’d ordered the wrong thing. What I really needed to order was an aisle chair, a smaller narrower chair that can make it down the aisle of the plane. He had to call for reinforcements and we waited ten more minutes for a second attendant to arrive. Rules were rules. 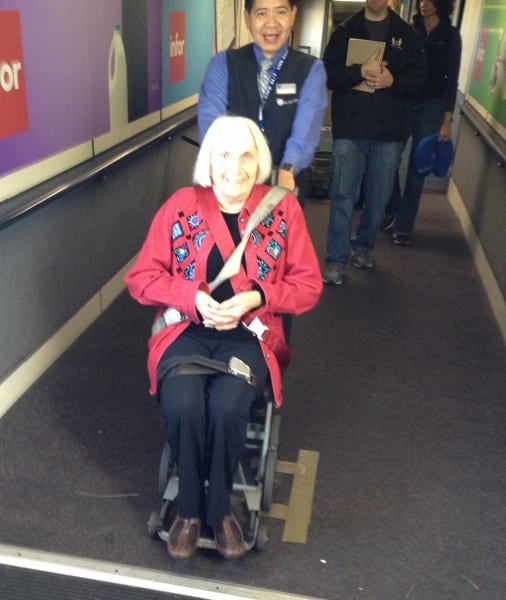 They helped Mom onto this chair and strapped her in in three places, pushed her to her seat and transferred her to it.

As we waited for the plane to take off, Mom remarked, “I remember when it used to be so incredibly special to get on a plane.” Then she turned to face me, “Have we ever been on a plane together before?” she asked.

“The first time was when I was four and we took a plane to Florida to visit your brother Joe. I remember my ticket said Miss Laura Davis and we had to dress up for the flight. I was so excited. I think you were wearing a hat and white gloves.”

Eleven hours after we left our house at dawn, we finally pulled up to Esther and Ben’s condo in Del Rey Beach in our rental car. Esther was standing outside with her walker, guiding us to their door. Ben, 50 pounds thinner than the last time I saw him, stood framed in the doorway. Soon the five of us were sitting in the living room, and when I looked at my mother and my aunt, I knew that no matter what happened this week, this journey had already been worth it. 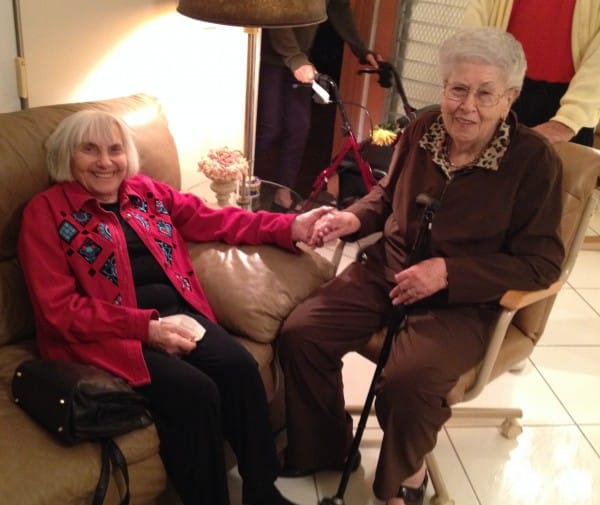 We all talked for an hour and then we figured out where we were all going to sleep. We were on different time zones and Esther and Ben were ready for bed. After I undressed her and tucked her into bed, Mom said to me in a loud stage whisper, “Do you think it’s okay that we just dropped in on Esther like this? Three people just dropping in like this? Do you think it’s okay?”

I looked at her, puzzled as I dropped a denture tablet into her pink plastic tub. “We didn’t just drop in Mom. This trip has been planned for a month and a half.”

“Yes, Mom it has. We had to buy airline tickets.”

“Yeah, we came here today on an airplane.”

“Yes, we did. Mom. Lizzy took us to the airport this morning and then we flew all day and then we rented a car and drove for an hour to get here. Maybe you’re just focusing on that part of our trip. You don’t remember being on an airplane?

“We weren’t on an airplane. You’re making that up.”

Esther passed by the den where we were sitting. “Esther,” I called out to her, “Didn’t we fly here today on an airplane?”

“You’re both just pulling my leg. We just dropped in. We just decided today and we drove over.”

Clearly, Mom was confused and tired after a long day traveling. I thought it was time to drop the conversation. “Mom, why don’t you give me your teeth and I’ll clean them for you.” Plop went the teeth and I turned out her light. Tomorrow was another day. 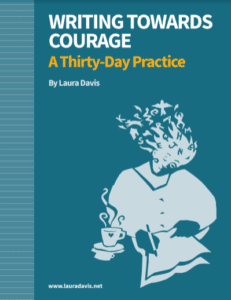 When will you personally know that the pandemic is over? Use this as a repeating line: I’ll know ... END_OF_DOCUMENT_TOKEN_TO_BE_REPLACED