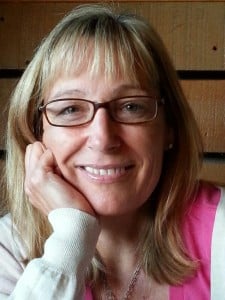 Tery Gargiulo is a member of the Wednesday morning writing practice group. She wrote this piece in response to an exercise that encouraged each writer to focus on concrete sensory detail.

I led the students through a long visualization of their childhood kitchen, asking them to look in the cupboards and in the fridge, to peer inside the pantry and to study the oven. I asked them to use all their senses–to smell, to hear, to taste, to notice the light in the room, to remember the specific foods that were there, to recall meal times and how food was prepared. To remember what was said in this room. How they felt in this room as a child. This visualization went on for twenty minutes before we wrote and the resulting pieces were rich and vivid. This is the first of several responses to this exercise.

I was never quite sure whose domain the kitchen fell under. Both of my parents cooked, so this room was no stereotypical woman’s territory. And when my mom left, the kitchen was one more room of disappointment, one more space where the life of a family was no more.

When my mom was still living in the house on 4th street, the house where we could hear the kids shouts at recess because we were only three houses away from the elementary school, I would drag a dining chair over to the sink and fill it up with Palmolive-sudsed water. This chore was a tactic my mother used to distract me from my distress of not being old enough to join the kids at recess. We used green Palmolive because Madge, the lady in the advertisement, said it was like getting a manicure, so soothing for your hands, not harsh like other liquid dish soaps. I would stand at the sink for what seemed like hours, the water on a slow drip, washing bits of fruit loops from the pastel green and blue sides of the plastic, unbreakable Tupperware bowls, rinsing the pulp from the bright blue tin cups we used for juice glasses. With five kids, glass was saved for the extremely rare case of company.

I don’t remember how old I was, but it was when I was old enough to stand at the sink without a chair to boost me that my father decided to remodel our kitchen. My father was an incredibly creative and crafty man, so this was no ordinary remodel. We did not hire anyone; we simply took sledgehammers to the wall and knocked out an opening on the wall between the dining room and the kitchen. Then my father created a pass through table, with one half being in the kitchen and one half in the dining room. If you were sitting in the kitchen and wanted to get to the other side of the table, you had to go through the door. The table was built at bar level height and covered in a hard chunky shellac, triangular brown pieces of plastic trapped beneath the surface so that when I ran my hand over it, it was bumpy and I never knew if it was clean or not, hardened bits of food particles so easily lost in the rough landscape of the table top.

Another addition to the kitchen during the remodel phase was a dishwasher. This is a common kitchen appliance today, but back then they were quite a luxury, especially for a family at our income level. It worked by wheeling it over to the sink, hooking up one hose to the faucet to run water into the dishwasher while another hose lay in the sink to send the used water down the drain. It was quite a mess if that hose got loose! And the noise it made was crazy, dishes clattering, pans banging. Needless to say I was seriously unimpressed. I liked doing the Palmolive soap washing, pretending I was getting a manicure, having rare quiet time with my mother while my older siblings were at school.

When my mother left, the kitchen was no longer a haven. It, like all the other rooms, was a place that at any moment could command my father’s wrath. He would come home late from his job as a food manager at a cafeteria to find packages of Oscar Meyer bologna sitting open on the kitchen counter, the edges of the pink-gray circles hardened and curled into the center, Kool-Aid powder and sugar crystals hardened on the white with gray stars Formica. the colorful ripped open and emptied packets leaving tell-tale signs of just how much liquid sugar we had ingested.

We never quite knew what food would be in the house, shopping was done on a haphazard basis because the five of us were supposed to take the bus to Dad’s restaurant for most meals. Food there was free for us, one of the few perks of his 60 hour a week job. I was the youngest and often alone, so at the age of 10, I was charged with having a dime, waiting at the bus stop, taking a 30 minute ride to the stop that was then a two block walk to the cafeteria; eating cold bologna and captain crunch was a much easier choice, and I could spend the bus dime on candy. One evening my siblings and I put hot dogs on forks and cooked them over the gas flame on the range. My father somehow found out, and my older sister got in big trouble. I learned early on how to stay out of the way.

The state of the kitchen was in many ways reflective of the state of the family. The longer mom was gone, the further the kitchen fell into messiness and disorganization. One day I opened the spice cupboard to be assaulted by the clashing odors of garlic salt, pepper and cinnamon- sugar, the yellow, black and brown crystals strewn across the shelf, so hardened it was impossible to clean up without a Brillo pad of which none of us was interested in doing. The freezer, and the refrigerator was more of the same, food slowly decaying into no longer recognizable forms, like the family, rotting away from neglect. The mismatched pots and pans, the scattered boxes of opened spaghetti and pancake mix, all part of the collage of life after mom.

Tery Gargiulo has lived a rich and varied life and has been called to write from a young age. She enjoys the use of words, whether written or spoken and has no goal for her writing other than to convey messages that might move the reader. Tery currently lives in Santa Cruz and when she is not pursuing her own interests, uses her time to facilitate executives awakening to their purpose.