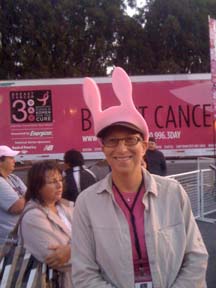 This is a long post from a long walk, but I promise it won’t take you as long to read it as it did for me to walk it! Find a quiet moment to savor the story of my journey. I hope it helps you feel like you were there.

Last night, my friend Barbara helped me carbo-load with a giant bowl of pasta, chicken apple sausage, sun-dried tomatoes, kale, onions, garlic, fresh peas and olive oil. Oh yes, and garlic bread. Now she’s gotten up in the pre-dawn to take me to the drop-off point in Daly City. We leave her Glen Park neighborhood at 6:00 AM. It’s still dark and I’ve been up since 4:30. My belly is full of chai. In the car, I eat a bowl of oatmeal cooked with banana, cinnamon, and almond butter, my favorite long-distance training breakfast.

My phone is charged–I’m planning to take pictures along the way and won’t have access to electric outlets for three days. My gear has been carefully packed in a rolling golf duffle borrowed from my mother, my clothes neatly rolled in 2.5 gallon Ziploc bags, marked Day 2, Day 3, sleepwear, warmies. I’ve got my four pill boxes full of medications and supplements, plus a stash of Advil, Valium and Ativan. I’ve already taken two Advil; when walking twenty miles, I believe in prophylactic medicine. My fanny pack is loaded with my usual supplies as well as a small spiral notebook and pen so I can record my journey.

I slathered my feet with a thick, gooey layer of Vaseline before I slid on my white, wicking socks and laced up my well-seasoned sneakers. I was told by one of my Tuesday morning walking buddies, the Butt Busters, that gobbing on Vaseline is a surefire way to avoid blisters. It was gross (how do you get all that Vaseline off your hands?) but Marilyn has done this walk many times so I meticulously followed her instructions.

Spraying exposed skin with SPF 50 sunscreen wearing a tank top and shorts is a very unpleasant experience at 5:30 AM. Don’t try it unless you have to.

My hair is half-an-inch long and I will be called "Sir" a number of times over the next three days. I cut it yesterday in honor of the event and in memory of my own chemo and the chemo of millions of my fellow cancer patients.

Packing List: What to Bring on the Three-Day Walk

Right now, the place I want to get back to is health. I have a miserable cold, the nastiest I’ve had in years. Karyn had it first and now Eli and I are down for the count. There’s coughing, sneezing, excessive snot, a headache, runny eyes, and a burning pain in my nostrils. My awareness is completely rooted in how awful I feel. It has telescoped all else.

I’m struck by how such a simple thing—a cold—can cut me off from my sense of well-being, my sense of self, my connection to those around me, any sense of efficacy or purpose or identity. I am simply sick. And this is just a cold. It isn’t life-threatening. It isn’t chronic. It isn’t cancer. It’s just a run-of-the-mill back-to-school cold. Nothing compared to what I’ve been through in the past or what my friends with chronic, uncurable conditions live with on a daily basis.

This article by Dan Barry was published in the New York Times the other day and I thought it was wonderful, worth passing on to those of you interested in human nature as well as the effects of serious illness and chemotherapy.

My Brain on Chemo: Alive and Alert

Within the chemotherapy alumni corps there exists a mutual respect not unlike the bond shared by veterans of war. Sometimes that respect is silently conveyed; not everyone wants to talk about it. And sometimes it is shared in the shorthand of the battle-hardened.

The usual: nausea, vomiting, hair loss. And the toes are still numb.

At this point the two chemo alums may begin to sense a phantom metallic taste at the back of their throat, a taste sometimes prompted by the intravenous infusion of the corrosive chemicals intended to save their lives. A strong drink might be in order; maybe two.

I heard this commentary on the radio the other day when I was driving to pick up an 8’ by 10’ print for Lizzy at Bay Photo Lab. In my current training mode, I related to it totally, and thought it was worth sharing here on my blog. So here’s what commentator and economist Justin Wolfers had to say about his running hobby. He’s analyzed the costs of running and, for him, it makes complete economic sense.

But the foundation of all economics is something called opportunity cost. It says that the true cost of something is the alternative you have to give up. So each hour that I spend running is an hour that I don’t spend hanging out, working, or sleeping.

Well, what can I say? My feet hurt! My calves hurt! My shins hurt! My quads hurt! I am experiencing the physical impact of walking 25-40 miles a week. It feels good while I’m doing it, but there’s a downside to being an athlete too! In fact, most of the people I know who have been serious athletes are paying the consequences later in life (now in my case). I may have what is the beginning of Plantar Fascitis. According to Wikipedia:

Forgetfulness is never on time. She has either missed the appointment altogether, gotten confused about who she was meeting or where she was meeting them, or she has lost her keys. She is forever making lists, but when she reads them, she can’t remember what each notation means. The list says pick up flowers, but she can’t remember whom they were for or why she was buying them.

Forgetfulness is full of apologies, but it is hard to forgive her because you know she will make the same mistake the next time. On the other hand, it’s hard not to pity her because she tries so hard and seems so sincere. She makes you believe that she can’t help herself.

I am driving up to Stanford Hospital for my second post-cancer mammogram. I turn on NPR, looking for distraction from the fear that sits in my belly, just inside my solar plexus. I know I should “just sit with the fear,” the certain knowledge that the line between life as a survivor and life as a cancer patient is paper-thin. I know that life can change irrevocably in a moment, sitting in a pastel-colored room, half-naked with a paper gown crinkling on my shoulders.

I am driving up alone. Karyn is working today. She is jet-lagged from her trip to India and struggling to manage her first few days back at work. I made a half-assed effort to get someone else to come with me, but ultimately, I decided to come here alone. Do I really want to have to deal with someone else’s reaction should I get bad news?

I needed to walk 11 miles on Monday.. I decided to get up early and “run my errands” on foot. I walked from my house in Live Oak to my local video store to return a couple of movies, took the long way downtown, through the harbor and Frederick Street park and around the Boardwalk and back to Front Street, to mail a package to Lizzy at the post office. Lizzy is at sleep-away camp and I’m trying to send her a package for each of the three weeks she’s there. This one had some friendship bracelets Karyn had brought back from India with instructions on how to use them and a novel to read. I put the goodies in a brown mailing envelope and carried it the 7 miles it took me to get to the post office. By the time I got there, the envelope had grease stains all over it from sunscreen and sweat. The woman at the counter said she wasn’t sure she could mail it because it looked like something toxic was leaking out of it. I explained that I was training for a breast cancer walk and that my daughter was at camp and really needed this package. The clerk took pity on me and plastered the envelope with Priority Mail stickers to cover the grease spots and threw it in the big canvas cart to be mailed.

Being in training feels like this. I put on my no-sweat socks, my wicking underwear, my easy-dry shirt, my breast-cancer-3-day-walk visor, and my $90 walking shoes. I strap my double-bottled fanny pack around my waist, filling one bottle with plain water, the other, water and an electrolyte pill fizzing happily away inside. In the front pocket of my pack, I carry a Lara bar with chocolate and peanuts, moleskin in case of blisters, chap stick, a tube of Glide to prevent chafing injuries, and a bright red cotton bandana to wipe snot and sweat. My iPhone is clipped on the front of my fanny pack, headphones wrap around my ears. A pedometer is clipped on to my waistband. Sunscreen shines on my arms and chest. I open the front door and walk out into the day.