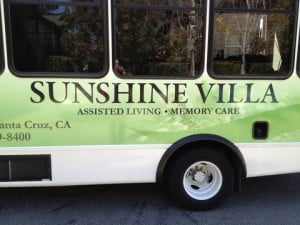 We slowly made our way down the flowered hallways, flowered wallpaper lining our pathway, flowers edging the muted carpet on the floor. I deliberately shortened my stride, moving so slowly it felt like the walking meditation I’d done 20 minutes at a time at Spirit Rock Meditation Center on 10 day Vipassana retreats. My mother was teetering nearby, floating with an expression on her face that looked sweet and empty at the same time. I’d taken her on a walk around the second floor of the building, up the elevator, circling three hallways, and back again. We passed the front desk, the music room, the library, and around the corner past the activity room, the place with the large looseleaf notebook out front where you can sign up for outings on the first day of the month—the scenic drives, a monthly movie, outings to Walgreens or Rite Aid to stock up on shampoo or Depends.

The first time I saw the Sunshine Villa bus, six months ago, I looked at the huge letters across the side of the bus on both sides, shouting out for all to see: Sunshine Villa Assisted Living and Memory Care. I remember thinking at the time, there was no way Mom would ever live here, ride in a bus like that. It would be way too humiliating. I felt the same way when I visited on Saint Patrick’s day and the halls were full of little cardboard shamrocks and leprechauns or at Halloween when black cats and orange pumpkins lined the halls. For the entire month of December, canned Christmas carols blared from speakers in the hall. That would be hell on earth for my proud Jewish mother, to be in such a goyisha place. It was like a holiday curriculum at a preschool on steroids. Is this what they think old people want?

Now, six months after my first visit, Mom was living here, being helped up into the van with the letters screaming Memory Care on the side, enjoying the scenic drives to nowhere.

And I was visiting her, every day, pretty much, when I was home, because somehow at 56 for me and 85 for her, a new umbilical cord had grown between us. I’d ripped the last one to shreds in my twenties, decimated it in my thirties, yet here we were growing a new one. How could it be, that now, despite my wife and my three children, my grandson and another one on the way, that my mother had suddenly become—once again, as she had been at the dawn of my life—the most important person to me? She was the one I woke up thinking of, the one I fretted over as I fell asleep, the one I felt I just had to see, had to call, had to check in on.

And so, once again, I had signed in at the front desk register and had insisted that Mom get some exercise. And now we were rounding the hall to her room. She was panting, exhausted by my healthy outing.  I watched her pull the blue stretchy plastic cord from around her wrist. She wears it all the time now when she’s not sleeping—it holds the key to her apartment, number 103. Shaking, she held the key up to the lock, the wrong way, three times. Three attempts, three failures. Everything in me wanted to pull out my key—the one I keep handy in the change purse of my wallet—so I could do it for her, but I didn’t. I let her have the dignity of opening her own door, of managing that one little bit of independence.

When she finally succeeded, she set her cane by the door and sat down heavily on the light colored couch we raised up on plastic risers so she could get in and out of it a little easier. Newspapers were sprawled over the couch and across her glass coffee table. A large desk calendar covered half its surface, each day crossed out with a big black X.  There was a dish with some leftover candy, a tattered deck of cards with a rubber band around them, the bright orange laminated phone list I had made for her, with a list of names and phone numbers in bold 24-point type on both sides.

I sat down next to her, and then immediately hopped up because sometimes it’s hard to just sit there with her in that room. Weren’t there things I needed to do? I checked her answering machine messages and erased them and brought them over to her. And asked if she’d called people back, but of course she didn’t remember. She had missed yet another meeting of the playreading group she used to attend on the first Monday of every month. And so I dialed her friend Shirley’s number so she could apologize. “I won’t forget again,” she told Shirley, but of course I knew she would forget in five minutes—and she certainly wouldn’t remember a month from now when the first Monday of March rolled around.

I went through the pile of newspapers and threw the old ones in the recycling bin. I straightened the things on the table. Rescued a stray pen that had rolled under the couch. Put the TV remote and the phone within reach. My chores done, I sat back down. She asked me what was new with Lizzy and Karyn. And then: “How’s Eli?”

“Oh yeah, he’s in Boston. Your kids,” she said, “You have the greatest kids. They are really special. That Lizzy. Did I ever tell you that she has ala meles.”

It was my turn to smile. “I know, Mom. All the virtues.” This was a pleasure we both could still share.

“You know,” she said, looking right at me, “I’m really in the right place living here. I can see I belong. I just hope I don’t live very long.” She said it just like that, smiling, like she did every time I saw her. “I’m pretty happy here,” she added, “but you know what I always say, ‘I want to quit while I’m ahead.’”

Then we made small talk, the same small talk we had made five minutes earlier. Only now the repetition no longer annoyed me; it was even comforting in a strange kind of way.

“Well, I said, gathering up my purse and my iPhone. “I’ll walk you to the dining room. I have to go pick up Lizzy at work anyway.”

When we reached the doorway, there was the index card I’d taped up right over the doorknob. In thick black bold capital letters it asked, “Have you brushed your hair?” Mom looked at it and said, “I read that everyday,” but she didn’t do anything about it, so I said, “Hold on a sec, Mom,” and I went into the bathroom and came out with her pink hairbrush and I brushed the back of her matted white hair, knowing that I was doing it for me and not for her because she didn’t care anymore. But I hadn’t yet caught up to her yet, and so I cared. I still cared about her hair.

Who I am becoming. You can share your response to this prompt below. ... END_OF_DOCUMENT_TOKEN_TO_BE_REPLACED