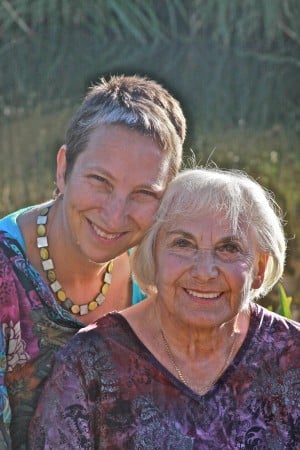 My brother and I packed up my mother’s mobile home, #94 at DeAnza Mobile Home Park, in three days. We cleaned it out three weeks after I’d brought Mom in for a “trial” at Sunshine Villa, a trial I knew would last the rest of her life, if we were lucky. If we weren’t lucky, she could end up somewhere far, far worse.

Mom didn’t know that she was leaving her home for the last time. Because a month-long trial was all she could agree to. But in her case a month might as well have been a year. Her sense of time—except for the eternal now—and the far past, especially around the 1940’s—is pretty much non-existent. When I saw Mom walk out her back door for the last time, then waver on unsteady feet at the top of a flight of stairs going straight down in two directions, I knew she would never be coming back.

It took Mom a month to adjust to her new surroundings. In that first week, she stopped reading email, forgot how to use a computer, began to wear Depends, and her already failing memory slipped even further. Three weeks later, she was using a walker. For her, it was a brutal move. I had been warned. I’d even bought a book online called, “Moving your Loved One with Dementia,” and everything they warned me about in that book, pretty much, came to pass.

Now, a year later, she lives in two sunny high-ceilinged rooms with the things I chose for her to take to her new life at Sunshine Villa. Her travel masks on the wall above her couch, painted the salmon color she loves, her artwork, some of it at least, the books I made her about her life, her computer (unused and untouched, but she won’t let me take it away). Some clothes, half a dozen pair of shoes, her name labeled by me in permanent marker on every garment, like a child sent to summer camp.

I didn’t bother bringing her any of her beloved jewelry. Instead, I made a pile for each of her two granddaughters. My mother, the vainest person I’ve ever met, is far beyond jewelry. Now, there is an index card I taped up beside her door, in big block letters it says, “Did you brush your hair?” I don’t think she ever reads it.One of the things I did keep from Mom’s place, aside from the salt and pepper shakers she bought in Poland, some beautiful ceramic bowls, a cheese board, and a metal rack with tines to cut meat, is a copy of the book I wrote about our reconciliation, I Thought We’d Never Speak Again, inscribed to her. In the pages of that book, I described giving up my need to be right, my need to have my mother acknowledge reality as I lived it. I gave up trying to change her, trying to make her be someone other than who she was. And yet, there was still the part of me that always says to people, “It’s never over until both of you are dead.” And I think some part of me always thought that someday maybe she’d finally admit to me, “Yes, it was true, everything you said happened did happen. All of it was true.” But I know that will never happen now.

Our relationship has peaked and that peak is passed. Whatever my mother could give me, she has given me. Whatever we could have talked about has been talked about.  Whatever could be reconciled or retrieved has been retrieved. There will be no more healing between us.

The healing that has occurred has indeed been a blessed, worked-for miracle. Me asking her to move to California from New Jersey so I could take care of her? A miracle. The two of us together at all? A miracle. And yet every day, there is less and less of her to be together with. Now our conversations circle around the same, bland, familiar territory, territory so boring and dead to me that I often want to scream and bolt from her room.  So I am giving up the idea that my mother has anything left to give me. Except for the delight that shows up in her eyes every single time I walk through her door. “Laurie,” she cries in pleasure and delight. As if the sun just came out in her world.

And so I guess it all comes down to love. Because for all her failings and there were many, for all her narcissism and need to control and need to be right, she always loved me. And that is what I am afraid of losing now. Now when I lament about how boring it feels to walk in that room and have that same endless circling conversation, I know that I want to flee, not because of who she is today, but because one day I will walk in that room and her face will stay blank and her eyes will not light up and she will not yell, “Laurie!” She will look at me with confusion in her eyes or nothing. And then the light in my world, the one constant thing that has shone from day one—her love, even when I eclipsed it and cursed it and damned it and blocked it out—her love will be gone, and our story together will end.

Tell me the story of an ancestor, someone from your lineage who touches or inspires you through ... END_OF_DOCUMENT_TOKEN_TO_BE_REPLACED