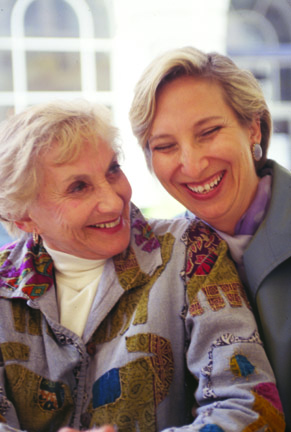 I Thought We’d Never Speak Again, Laura Davis’s book on reconciliation, has profound meaning to me because, as her mother, I am the one she never thought she would speak to again. We became estranged over a difficult family issue that seemed to be permanently  irreconcilable, complicated by our living on opposite sides of the country. This period in my life, without my daughter, was excruciatingly painful for me.

Miraculously, motivated by a deep mother- daughter bond, we each took small tentative steps to break the impasse, and we did. I wanted my daughter in my life again, to be a grandmother to her children, and she wanted the same. That seemed to both of us a priority over the differences that separated us. It took time and the courage to push back the fears that we would be hurt again. Reconciliation required that we be in the present and focus on what we wanted now.

As I grow older, it feels more and more important to let go of old differences that interfere with my happiness. I need closeness with family.

Laura’s book tells many stories of people like us. The scenarios might be different, but the underlying theme concerns people and groups who are split apart and want it to be different, hoping to renew their relationships. When Laura first told me about her plans to write the book, I was naturally apprehensive, even though she assured me that I would have an opportunity to edit the manuscript. What was she going to say for the whole world to read about? As I pored through I Thought We’d Never Speak Again during a visit to California, the tears began to flow.  Some passages were difficult for me, but I could sense Laura’s desire to spare me any undue pain, yet use our story to show how reconciliation was possible.

In allowing this book to be published, I had to accept the fact that I was not “perfect,” just human like everyone else.  I ended up believing that we could be “imperfect” models for other people struggling with troubled relationships.

Discounting a mother’s pride in her daughter’s skill as a writer of clear, touching prose, I believe this book to offer an inspiration to people who need help and inspiration in reconciling differences. So many of us need to bring more love and understanding into our lives.