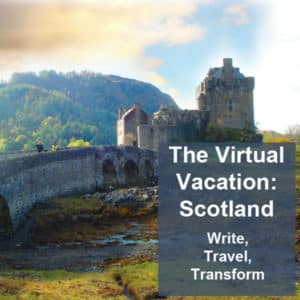 On the final outing in our ten-day trip, we headed out after lunch, with Alistair at the helm of our bus, on our way to Inverness to catch our boat to Loch Ness. “If you come from Inverness, you’re called an Invernessian,” Alistair told us over the bus microphone. As we drove by a the river and saw some fisherman, he said, “If you’re a tourist, it costs 200-300 pounds (about $500 dollars) a day to fish and you’re not guaranteed to get a fish, but you are guaranteed to get eaten alive by midges.”

As we queued up for our boat ride, I heard Julie A. singing the theme song from Gilligan’s Island. Julie is always good for a song whenever the spirit moves her. This was our boat: 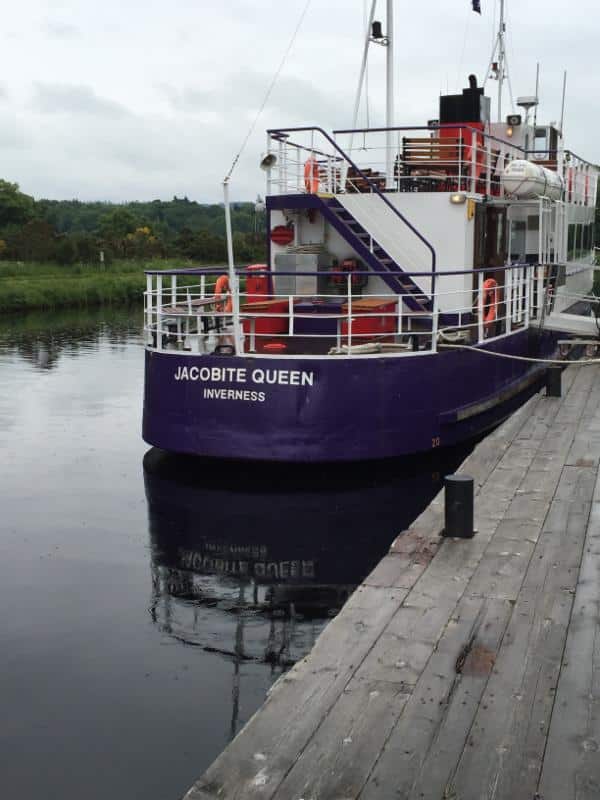 Once we boarded, I climbed up to the top deck of the ship. A crew member was scraping recent rain water off the wooden benches with a squeegee. Her black vest was emblazoned with small turquoise letters across the back. 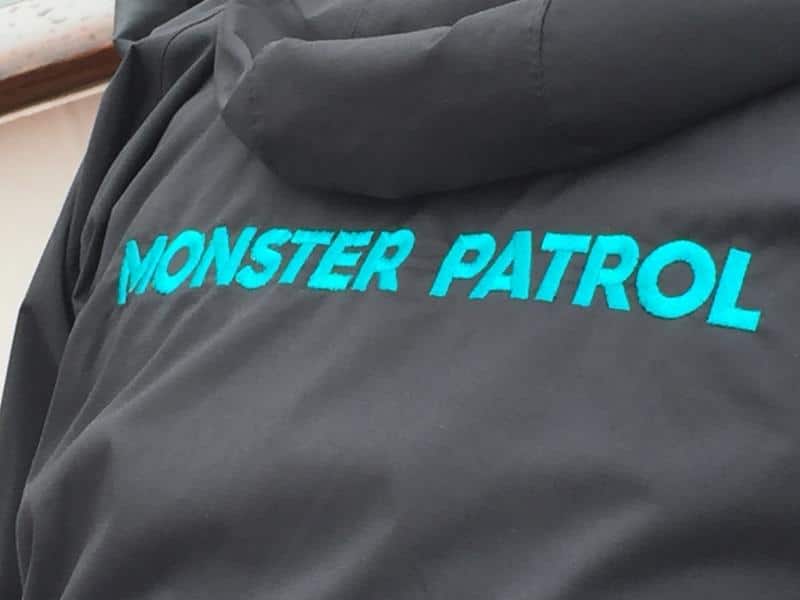 I sat next to Dave, who was wearing his usual black jean shorts, tennis shoes with a plaid sweater. I was sitting beside him wearing jeans, a tank top, a cashmere sweater, the big green fleece coat I bought at the Army-Navy store, gloves and a rain poncho. 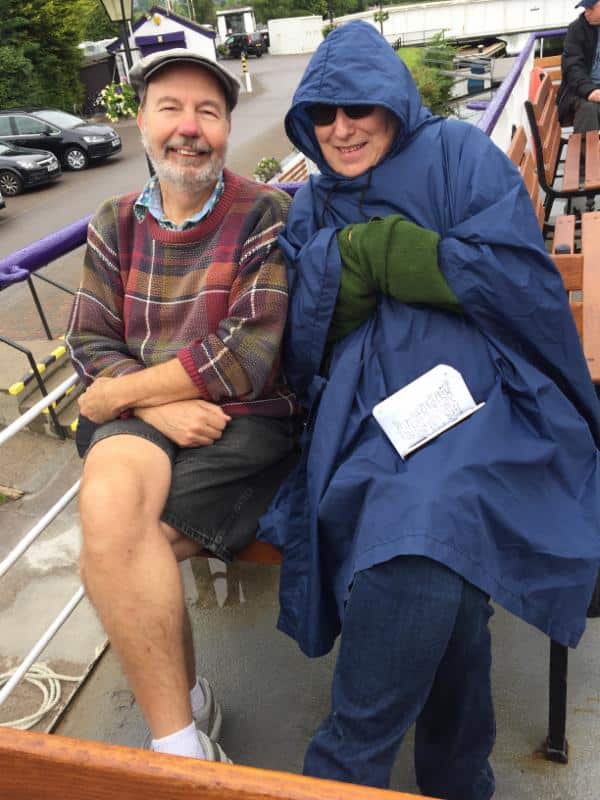 How could Dave so hot-blooded? Had he grown up in South Dakota? Minnesota? Fairbanks? When I asked, Dave said, “Nope. I’m from Philadelphia. It’s my Russian and Ukrainian blood. This is summer weather in Russia. It’s all relative you know.” As the canned narration on the boat welcomed us to the Jacobite Queen, Dave said, “Now I’ll really show you my Ukrainian blood,” and he started disrobing. This is why we all love Dave. He has a real appreciation for the absurd. 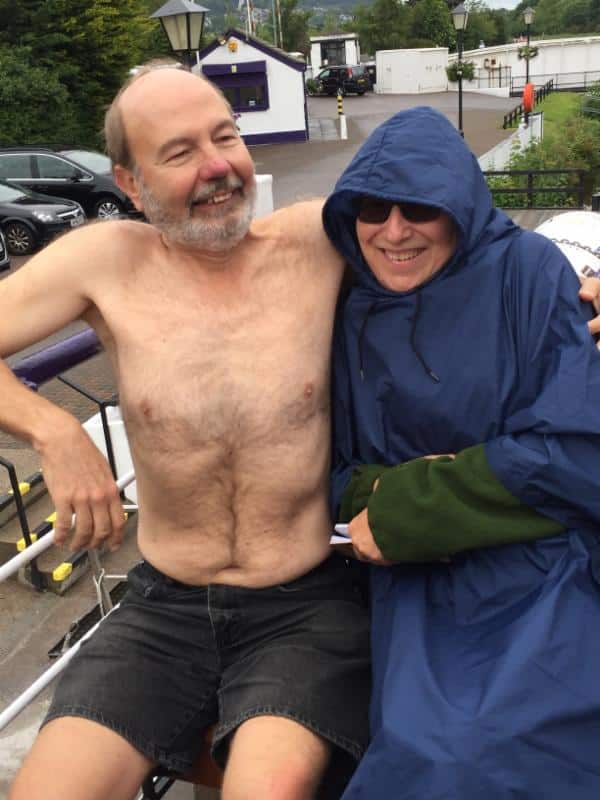 Eventually, I wandered down to the snack bar where they serve a variety of local ales: Nessie’s Monster Mash, Happy Chappy Ale and Thirsty Cross Scotch Cider. With your beverage of choice, you can also get Mackies Crisps in a Bag in flavors ranging from Haggis and Cracked Black Pepper to Flame Grilled Aberdeen Angus. I passed on both the ale and the crisps. I got a latte instead.

The view on either side of the Caledonia Canal reminded me of Ketchikan, Alaska where I lived more than 30 years ago. All that was missing were the bald eagles. 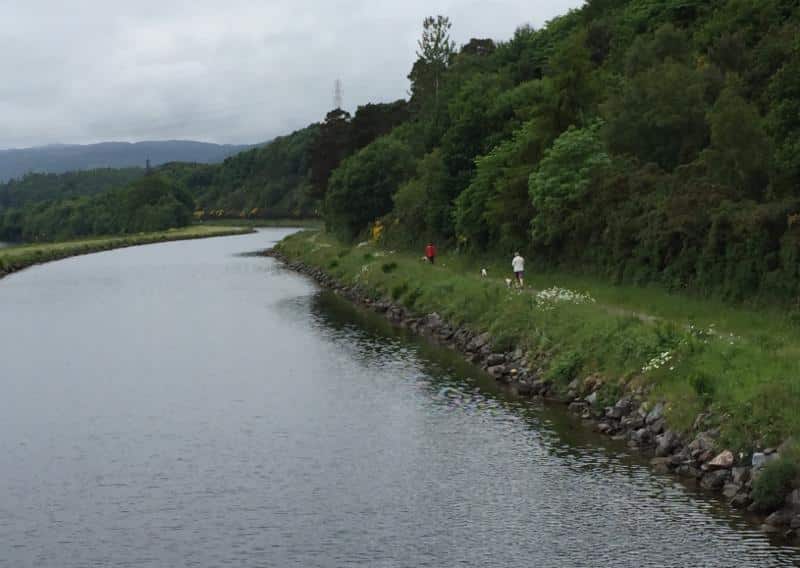 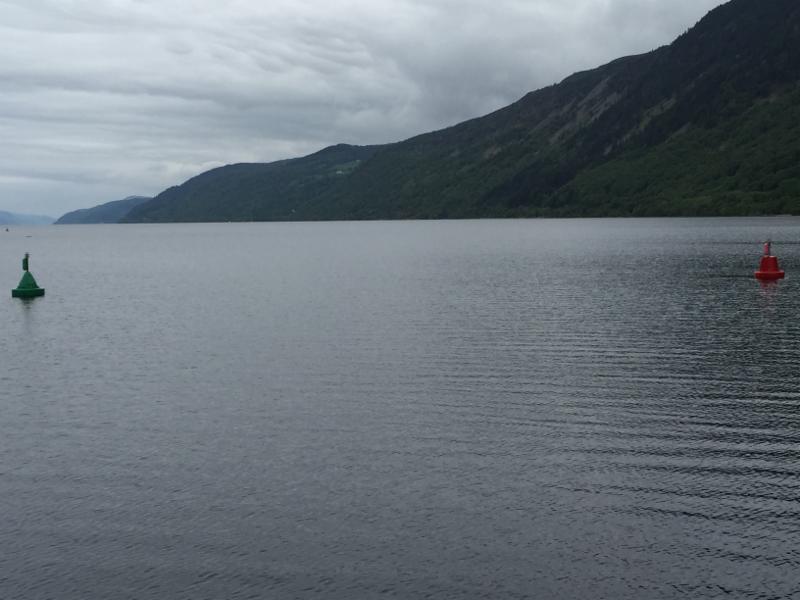 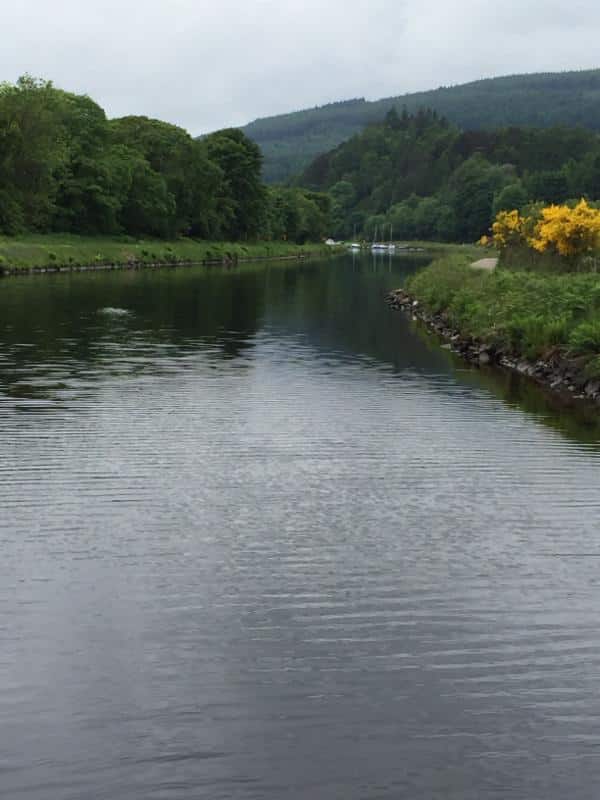 The ship stopped as we passed through one of the lochs that regulate the depth of the water leading into Loch Ness, this loch being one of eight that are known together as Neptune’s Staircase.

Loch Ness is stunning. It covers 21.8 square miles on its surface and is Britain’s second largest body of freshwater in terms of surface area. But its great depth, 754 feet deep, make it the biggest by volume. Because of the high peat content of the water, the water is extremely dark. As the boat brochure says, “With 263 billion cubic feet of water, certainly that’s enough for a mysterious creature or two.”

Records of sightings of “Nessie” date back to the 6th century. There were occasional reports across the next centuries, but with the communication possibilities of the 20th century, sightings increased dramatically and the legend of the Loch Ness Monster spread far and wide.

Numerous hoaxes have been exposed over the years, including the famous faked surgeon’s photograph of the Loch Ness Monster–an 8 inch construction made from a toy submarine and some plastic wood. Still, there have been enough sightings to promote extensive scientific expeditions that have searched for Nessie with sonar, submarines and ships of all kinds. Nothing has ever been proven, but the legend lives on and the tourist dollars keep rolling in. 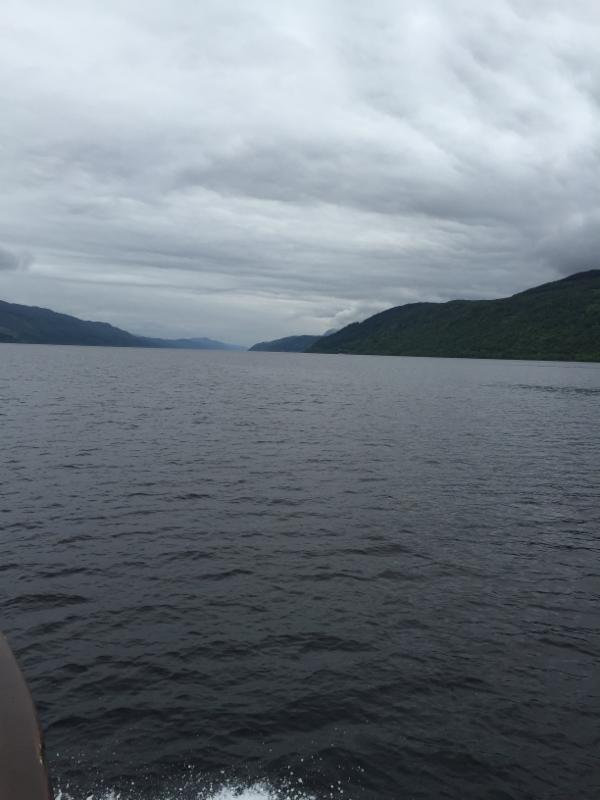 At the other end of this relaxing boat cruise was a visit to Uruquart Castle, Loch Ness, a “mighty stronghold of kinds and clan chiefs for 500 years.” I watched an 8-minute movie in the visitor center that covered 1000 years of the castle’s history, starting with the Picts in 500 AD. This well-produced little movie basically showed men killing each other and taking over the castle in wars and attacks continuously, with short periods of peace, over the course of ten centuries. When the movie was over, the woman running the projector pulled back the curtains revealing a great panorama of the castle itself. Then I got to walk all through it–an amazing place. 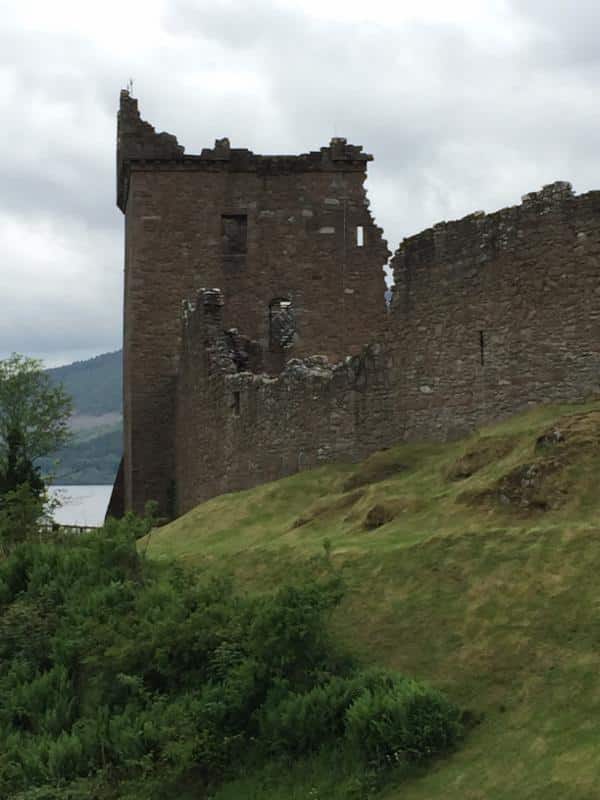 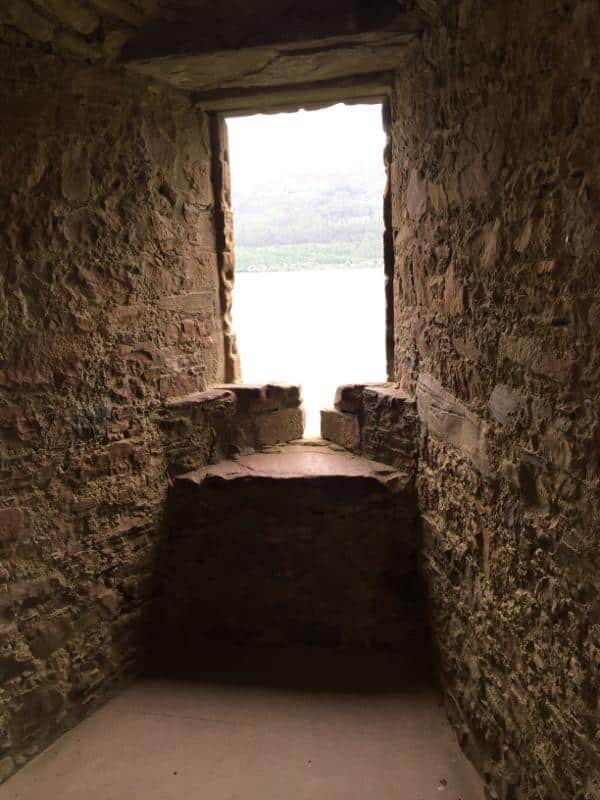 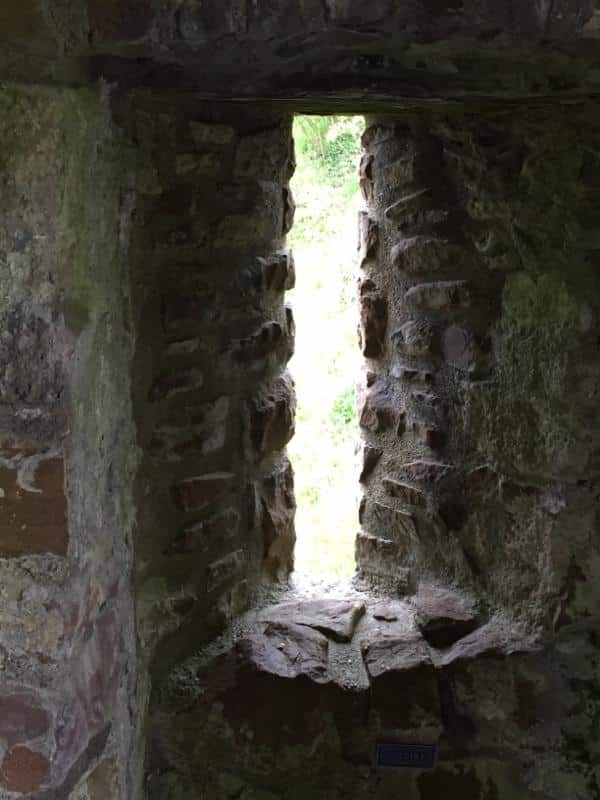 I particularly liked these massive stone balls, over 70 kg each, that were hurled from a trebuchet, a huge medieval siege catapult, more than 200 meters to destroy castle walls and vanquish screaming, bloodthirsty, testosterone-filled foes bent on death, pillaging and destruction. 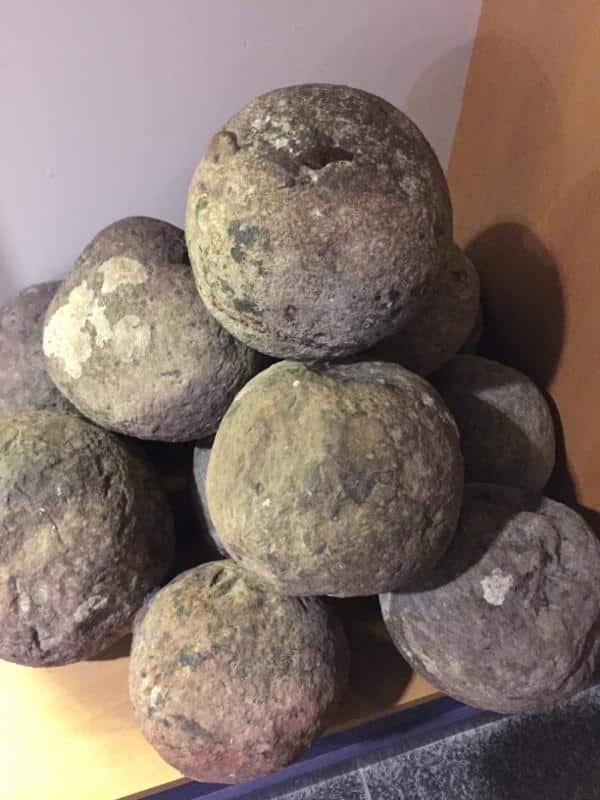 One of my favorite parts of touring these kinds of places are all the languages you hear as you walk around, as this good-bye wall attests: 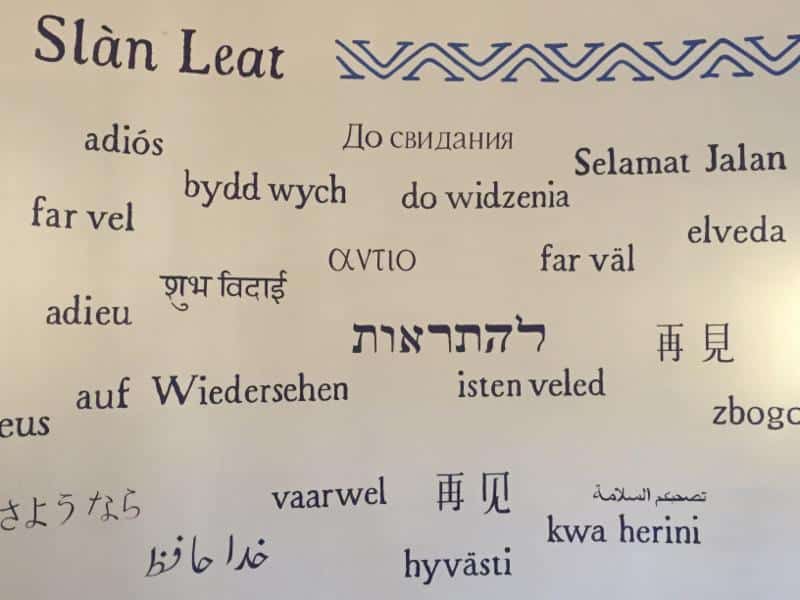 And speaking of languages, our Jacobite tour guide on the bus back to Inverness told us that Gaelic is still widely spoken through the Highlands (where our retreat is centered) though it’s barely spoken in many other parts of Scotland. Gaelic, she told us, comes from six connected Celtic languages. There are even two local Gaelic speaking elementary schools and two Gaelic speaking colleges, one on the Isle of Skye and the other in Nova Scotia.

At the end of our journey back to Newbold House, we stopped at the train station so we could pick up our train tickets for our departure a day and a half from now, and there was the evidence right in the train station: 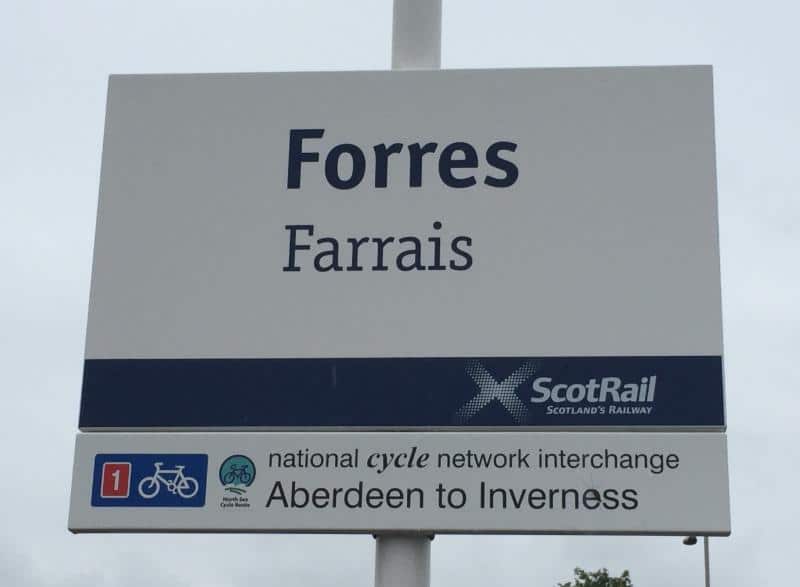 Tonight all my students are preparing for a reading of their work in the morning. Tomorrow is our last day – and all of us are certainly going to miss our adventures in Scotland and the amazing Newbold Community.