When we arrived at the airport, several of us needed to use the facilities. When I went to the bathroom, it was empty. There was no toilet paper left in my stall (though there was a toilet paper dispenser), so I used the handy-dandy water sprayer next to the toilet that is found in every bathroom in Indonesia. Indonesia, like many countries in the world, has been a paperless culture, and toilet paper is a bow to Westerners and tourists. So, I used the sprayer and then was faced with a dilemma—do I just drip dry before pulling up my easy-wash travel underwear and capris? It’s been a question on my mind for the last two weeks, but I forgot to ask Surya. What do the Indonesians do? It seemed like the only option.

A couple of my fellow Java travelers, Dorina and Melisa, soon headed into the bathroom as well, and ten minutes later, they emerged slightly hysterical and laughing. Dorina said, “Oh my God, Laura, you have to write this in your blog!” They proceeded to tell me that when they went into the bathroom, there were other women, so they waited for the first two available stalls. Then a whole group of Indonesian women came in and swarmed in front of them, grabbing every available stall.

Dorina explained, “I was waiting for my turn. As I got toward the front of the line, women started nudging me from behind and darting in front of me into the stalls the moment a door opened up. These were small women, wearing hijabs, who only came up to my shoulder, and they were very aggressive, elbowing me on both sides to get ahead of me. In my jetlagged state, I said out loud, ‘What’s going on? This is mayhem!’ One of the local women, who obviously understood English laughed, enjoying my dismay. I said to Melisa, ‘Get in front of a stall. It’s every woman for herself.’ it was like a video game. We had to get into the right slot at the right time and the grab the stall.” We had to be vigilant and finally, we both successfully darted in. And by the time we came out, everyone was gone, as if it had never happened at all.

Apparently, there is no concept of waiting in line in Indonesia. I’ve experienced this in other countries when queuing up to catch a plane or waiting in a line of any kind. When it’s time to enter, everyone just swarms and pushes toward the door. It’s very disconcerting for those of us trained in elementary school to go to the bathroom in an orderly line.

After we picked up our bags from the dragon carousel, I located our tour guide, Roy, who greeted the six of us with melati (jasmine) leis around our neck. The sweet, cloying odor of the sweet flowers rose up from our chests as we made our way out to our transportation. We expected a small six-seater van, like the vans we used to get around Bali, but Roy led us to a giant full size air-conditioned bus—and the six of us were the only passengers. We were shown how to recline our seats and were each given a bottle of cold water and cool wet washcloth to wipe the travel weariness from our hands and face. We each had a row to ourselves with more than a dozen to spare.

It was a two-hour drive to our hotel, a kilometer from Borobodur, and for the first half hour of the drive, Roy talked about Java. Unlike Bali, with its dominant culture of Bali-Hindu and a very unified culture, Java is a melting pot. Roy, from Sumatra, told us that the Javanese language is full of words reflecting foreign influences: Chinese, Portuguese, Arabic, Sanskrit. The older people who live here, he said, understand Dutch because the Dutch were the colonizers until 1949. They came to extract the wealth of the spice trade from Indonesia, dictating what crops the locals grow: cacao, coffee, nutmeg, cloves. Indonesia became a country in 1945 but did achieve independence until 1949.

As we drove along a four-lane divided highway, I noticed a lot more cars on the road that scooters—very different from Bali—and that everyone on a bike was wearing a helmet. We passed lots of businesses and many signs in English. When I asked Roy why so many businesses advertised in English, he said it was because they could charge three times as much as the local price. On our left, we passed a huge mall with giant letters in English announcing a plethora of chain stores, some familiar to me and some unfamiliar: Uniqlo, Ace (Hardware), H&M, CGV Cinemas, Burger King, Happy Puppy. Hypermat, Matahari.

Roy warned us that locals will want to pose for pictures with us—he said they’d print those pictures, blow them up and put them on their walls at home, and then brag, “I spoke English with her.” We were not in Bali anymore.

Indonesian is spoken here, as it is everywhere in Indonesia. But like all the other parts of Indonesia, there are local languages as well. The last thing Roy taught is how to say thank you in Javanese: Matur Nuwun.

Now we are arriving at our very elegant hotel, with the Muslim call to prayer rising up to our hotel room window, and it’s time for me to finish typing this post on my laptop.

Our wake-up call tomorrow is at 4:00 AM. So it’s settling into our rooms, hopefully room service and early to bed. We’re being picked up at 4:30 AM to see the sunrise at Borobodur. Of course, Roy can’t promise us a sunrise and not a cloudy day, but it is the best way to beat the crowds and the heat. So, it will be early dinner and to bed, and the glories of Borobodur tomorrow. 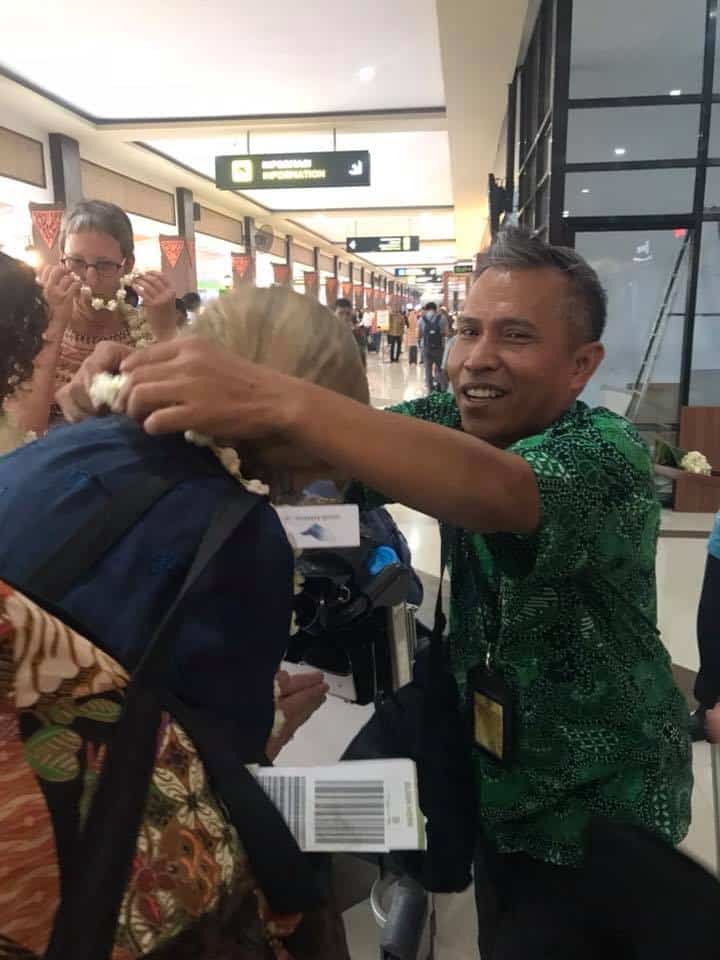 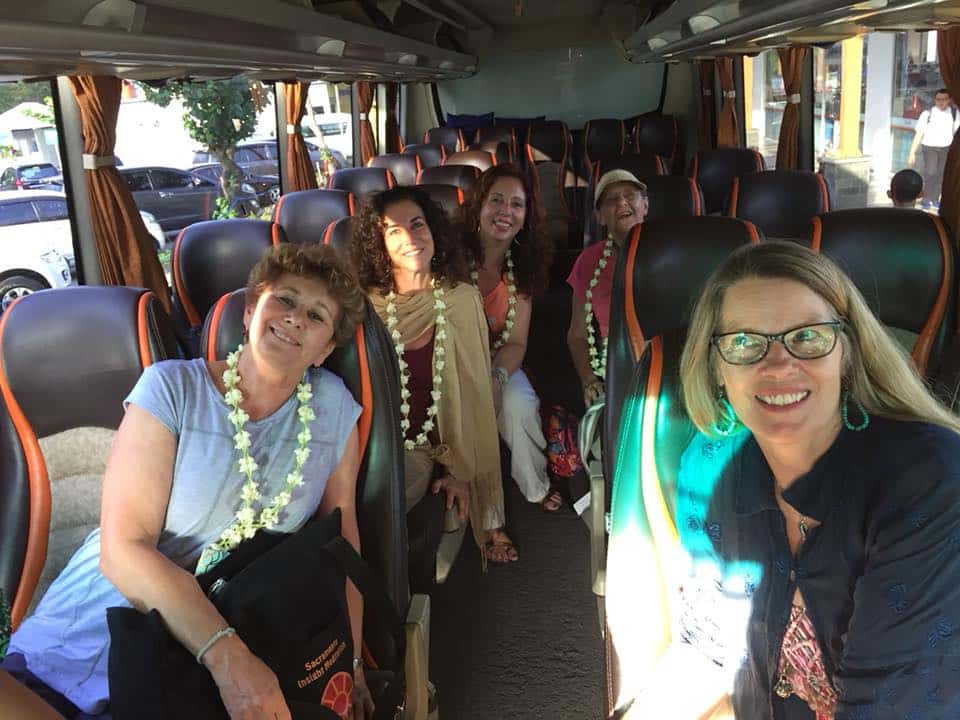 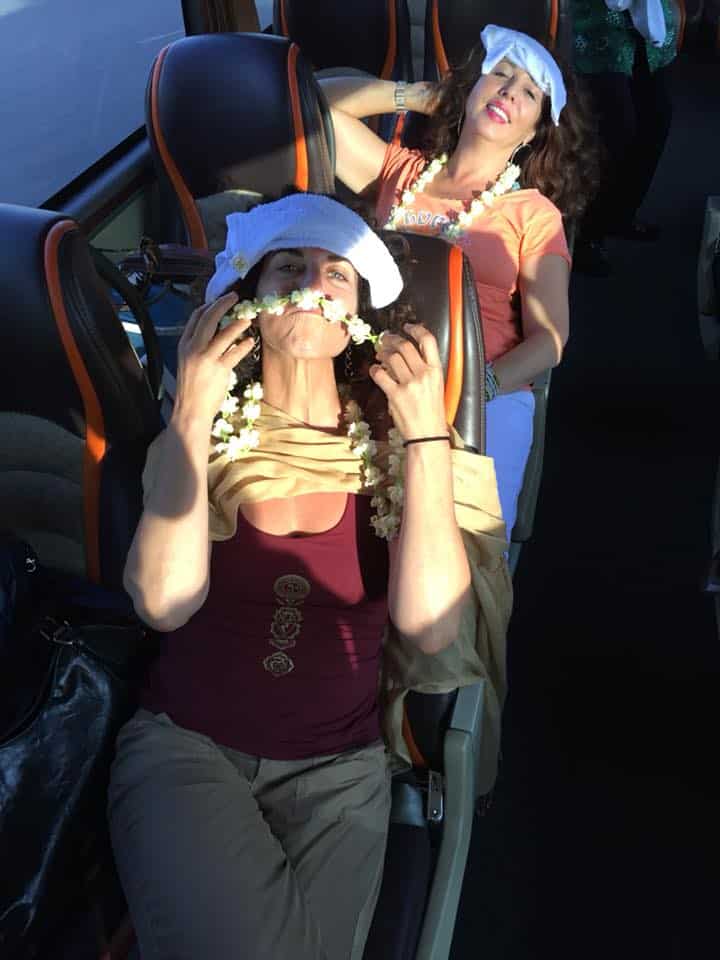 The lap of luxury. 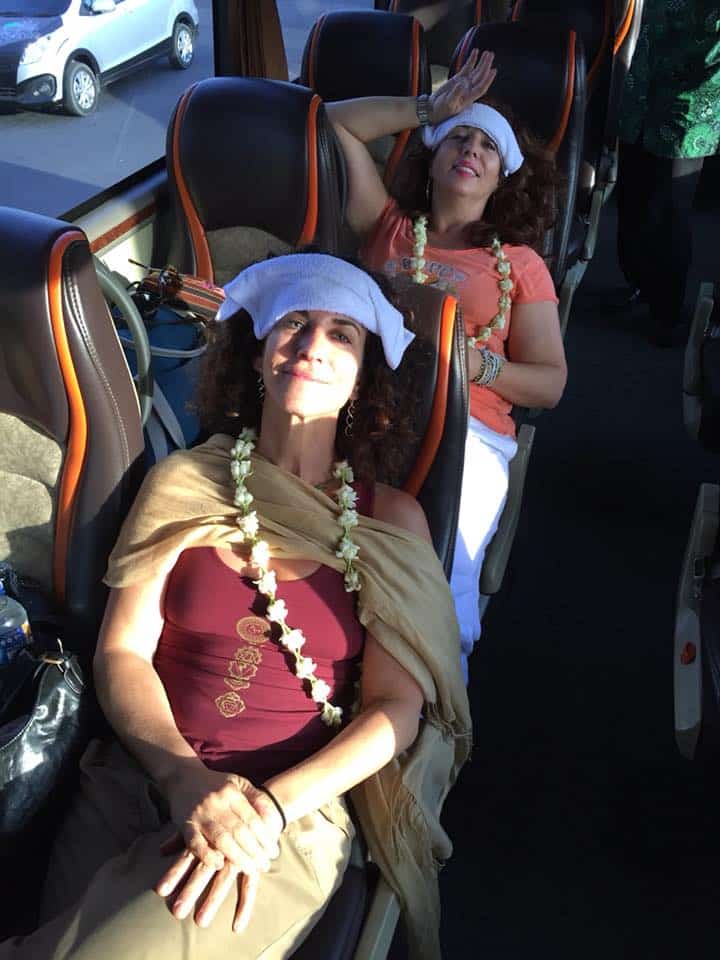 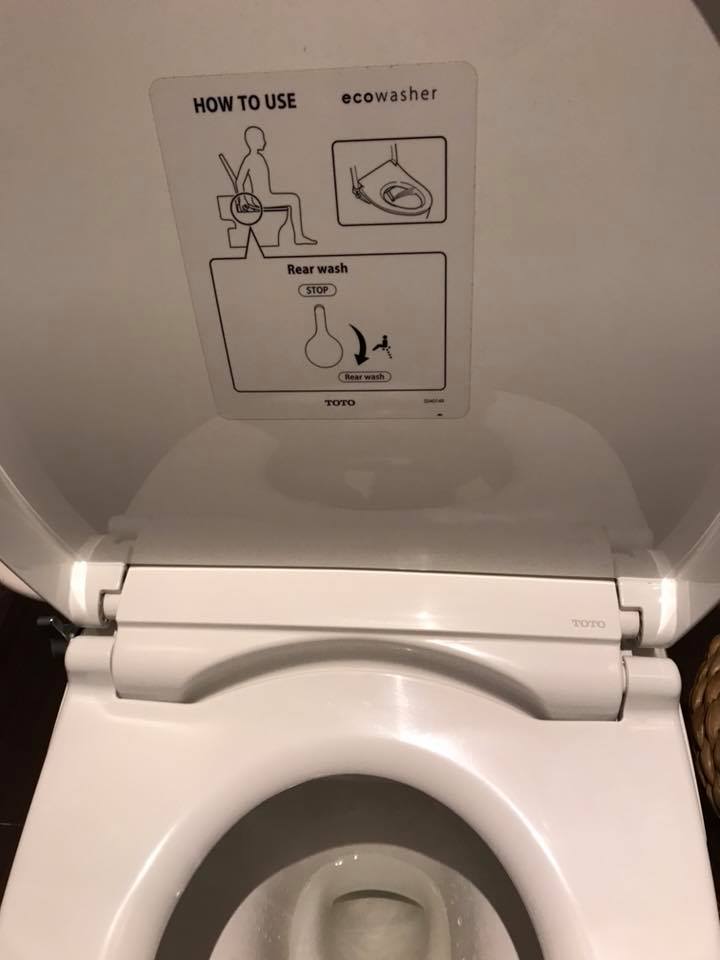 Toilet instructions in our the Heritage Hotel lobby. It is a very fancy classy place.