I’ve always loved string figure games. I grew up doing Jacob’s Ladder and playing Cat’s Cradle. String games are kind of like riding a bicycle—once you learn how to make them, you never forget. It’s muscle memory—cellular intelligence.

When our kids, Eli and Lizzy were in elementary school, they went to an alternative elementary school in Aptos, California called Orchard School. There were 60 kids in the whole school—kindergarten through sixth grade. The campus was 12 acres and each subject was taught in a different building. Fort building and playing in the mud—and being in school barefoot were major activities. Instead of traditional physical education, they had circus arts. They learned to walk on stilts and rode unicycles all over the campus. It’s how they got from class to class. And I think it was in circus arts class that they, too, were introduced to string figures. I remember their intense concentration and obsessive focus on learning how to do Jacob’s Ladder and their thrill when they finally mastered it.

A few months ago, I was taking an improv class and one of my classmates, Fred, goes around to all kinds of schools and teaches math using string figures. Remembering this, and knowing we’d be visiting a local school on this trip, I called Fred and asked him if I could buy 50 strings from him—his strings are perfect, colorful and beautiful. I thought I might get a chance to use the at the school with the kids. So tucked in my suitcase was a small black cloth bag, full of 50 colorful strings each wrapped with a tiny rubber band.

Yesterday afternoon, during our free time, Karyn and I decided to head out on another hike, checking out a path near the waterfall that we’d seen already. Some people slept and rested. Some went walking. Some were ambitious and energetic enough for a hike. And I loved walking around seeing people already writing in the little notebooks I gave them. It made my teacher’s heart sing.

When we came back, I decided to stop back in our writing room to pick up some thick paper I’d left up there so I could make nametags for the group. When I in through the back door, four little boys were sitting in a huddle whispering and talking to each other, their shoes piled up in the corner. I asked if I could take their picture, and they said yes so I did. Then I ran back to my room, found my bag of strings and brought five up to the writing room, four for them and one for me. By the time I got back, Feliciano, William, Nelson and David were surrounding Brenda who was sitting in the doorway doing a watercolor.

I pulled out a string and demonstrated Jacob’s Ladder, but then I realized I had no idea how to teach them to do it. It’s an advanced string figure, so I created cat’s cradle in my hands, but then realizes with no one else to demonstrate how to pick the X’s and bring them under or over, there was no way to show them what was possible. Brenda tried to help, but she didn’t know how to do it and she wasn’t a quick study. So the boys and I fumbled along. I tried to teach them the opening shape, but without an accomplice helping me, it was impossible. We laughed a lot and when it was time for them to go, I sent them home with their strings.

That’s what I love about travel and Sach’a Munay. You always run into the unexpected. 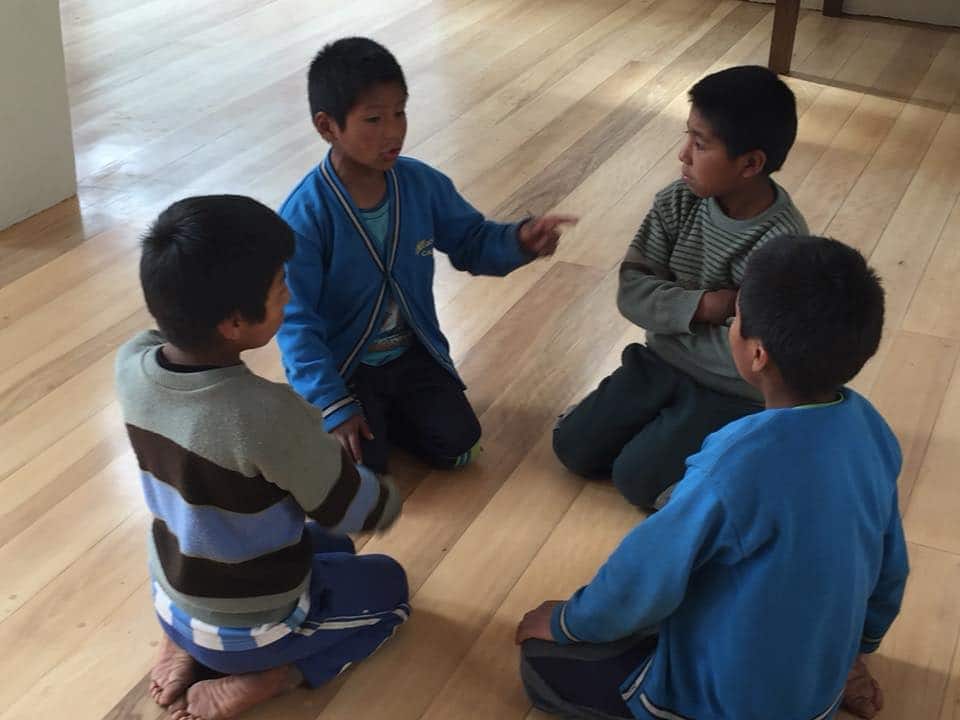 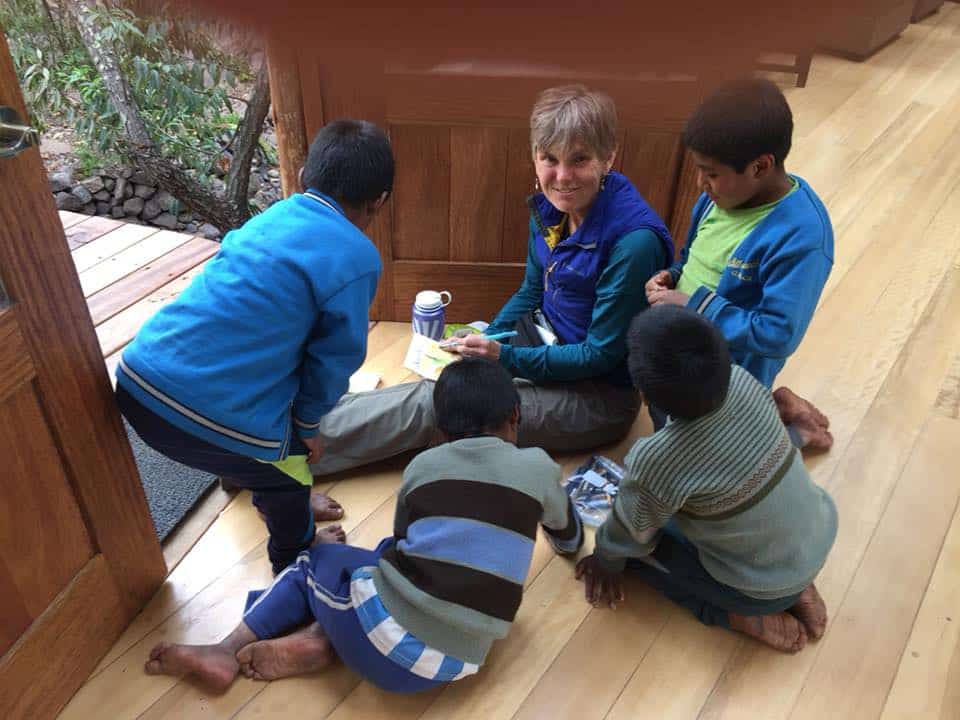 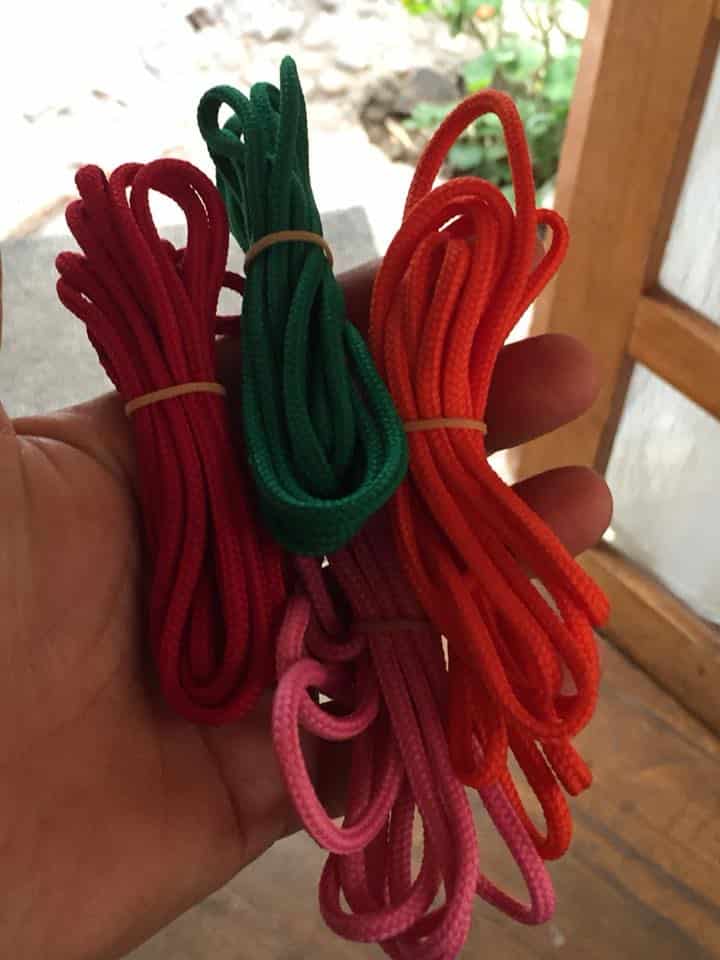 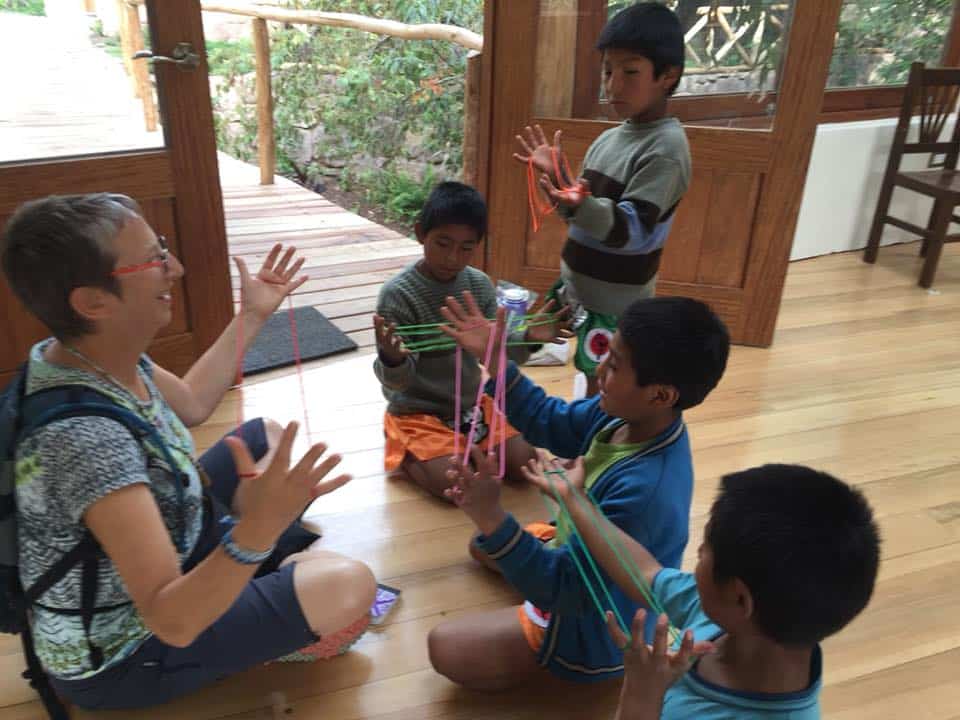 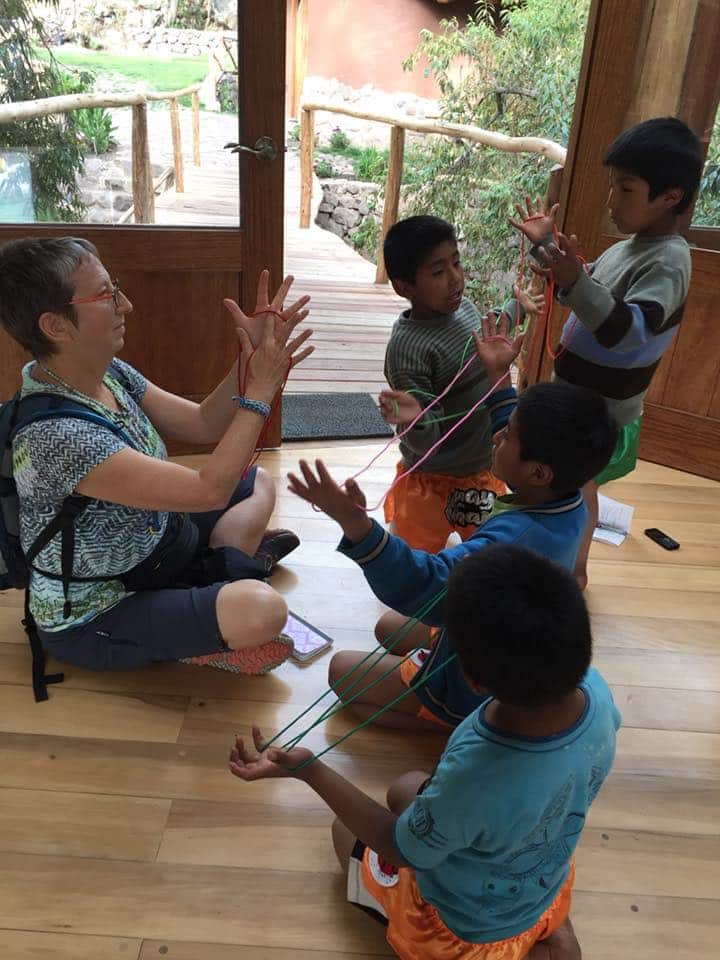 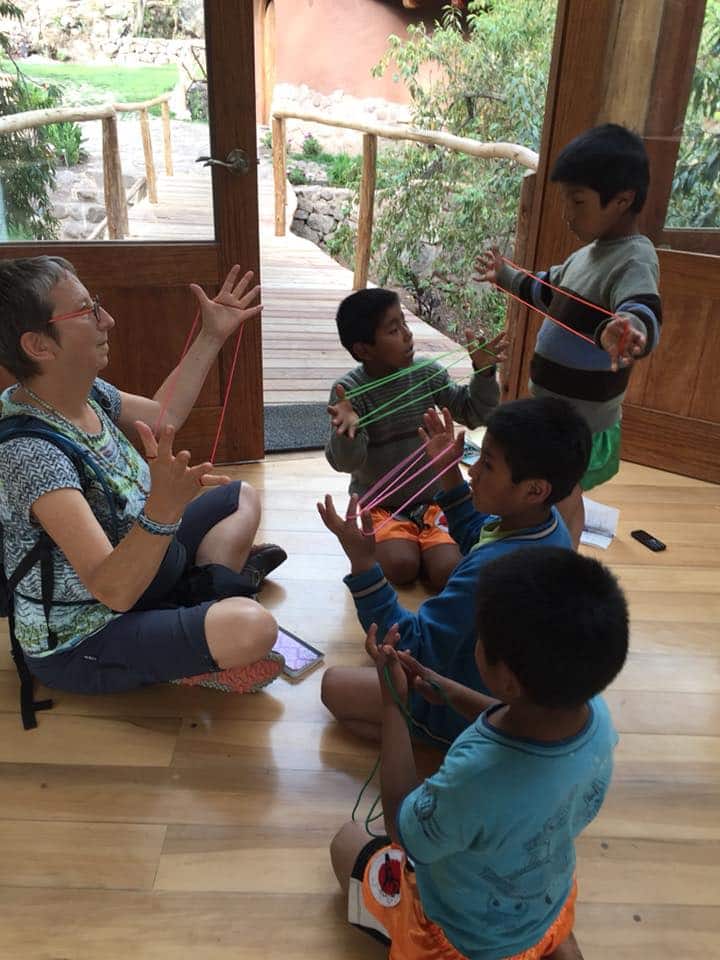 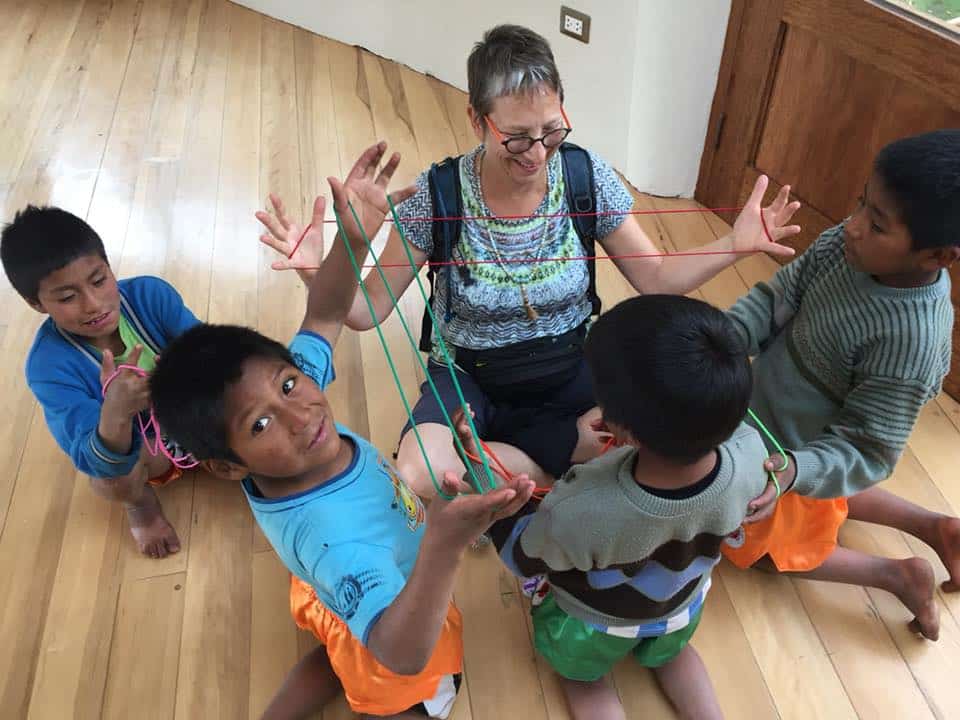 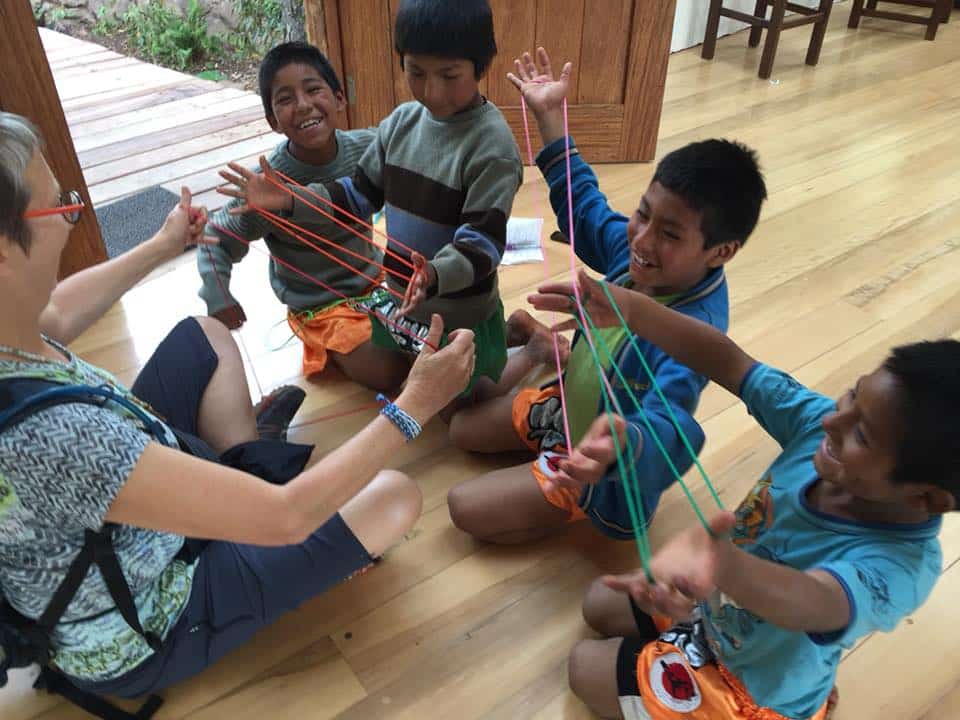 Coronavirus & the Pandemic Response A Room, a Bar and a Classroom: How the Coronavirus is ... END_OF_DOCUMENT_TOKEN_TO_BE_REPLACED