Every morning at 7:35 AM, there is meditation up in the sanctuary at Newbold House. It’s for the residents of the house, but as guests, we are all invited. After the meditation is a half hour of Taize singing—devotional singing from around the world, sung in four-part harmony.

I showed up for meditation and singing one of the first mornings I was here. Five of us sat on maroon meditation cushions in silence. After half an hour, Christopher rang a gong, ending the meditation, then opened a little cupboard and handed out a set of small songbooks. We sang four simple songs in Latin, Italian and English. I can’t sight-read, but I like to sing, so I did my best to follow along. Even though I couldn’t hit most of the notes or pronounce the words, I loved being part of the lifting of voices.

The sweetest part of this morning ritual is that in the middle of the final song, the singers climb down three flights of stairs from the attic, harmonizing all the way. They end up in the coffee room, which has lovely acoustics, singing in beautiful harmony, Next door in the dining room, as we dish up our morning porridge, prunes, fresh yogurt, and homemade bread, they continue to sing, raising their voices in a rousing finish. So every morning, whether we join them in the attic or not, we are serenaded by angels over breakfast. It is one of the sweetest things about staying at Newbold House. 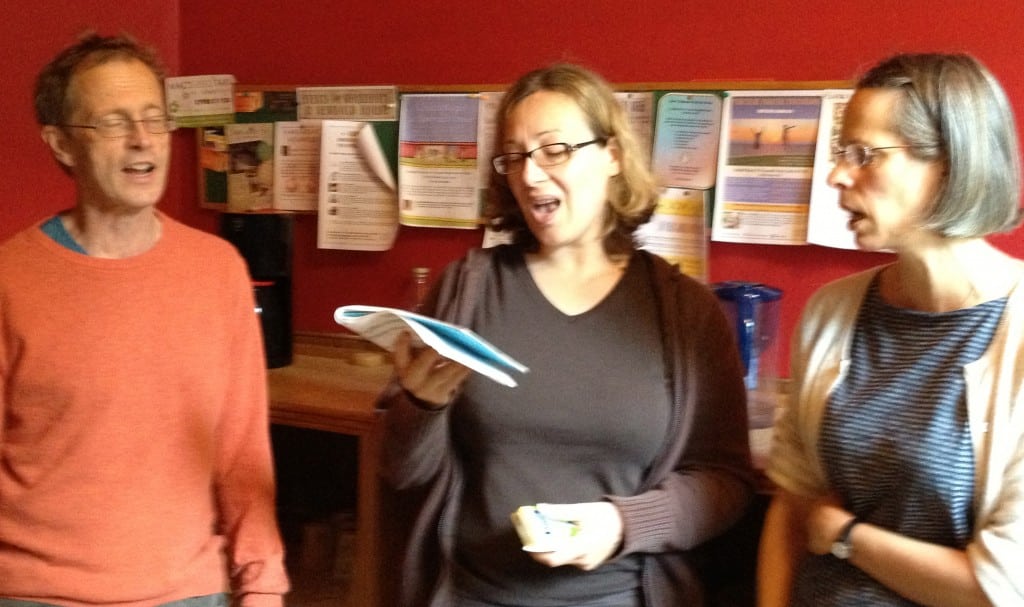 There is another angel who has been afoot at this retreat; this one comes in the middle of the night bearing gifts especially for me. For the past few mornings, I have been the recipient of her gifts, laid out on the carpet in front of my bedroom door, made of one of my favorite things in the world: Scrabble tiles. I like to call my mysterious middle of the night visitor, The Scrabble Fairy.

I believe she is a conspiracy; I know she is—there is a little gaggle of Scrabble players among our company. Late at night or early in the morning, or between classes, I often see them bent over the Scrabble board, playing some of the strangest variations of Scrabble I have ever seen. 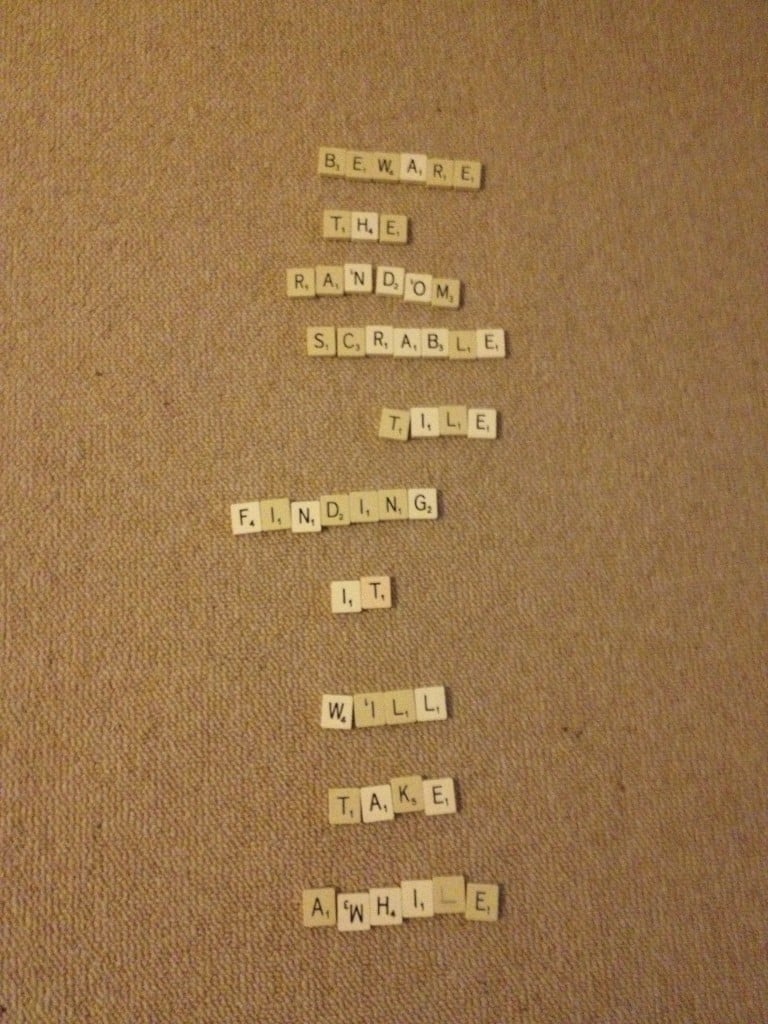 One day, their board was full of exceptionally long words and when I stopped to make sense of their board, Julie told me they were playing nine-tile. They insisted that once I’d played Scrabble that way, I’d never go back to regular 7-tile again. But I wasn’t sure I was up for that.

I’ve been a diehard Scrabble player for decades, though I do not get to play as often as I would like. So the other night, I asked Julie and Talin, our two most passionate Scrabble mavens, if I could play, but only if it was regular Scrabble—seven tiles on a curved wooden rack. Julie graciously gave me her spot and Talin asked if I wanted to play by the rules of her feminist Scrabble club up in Toronto.

“A feminist Scrabble club?” I asked. Wasn’t that an oxymoron?

“Yes, a feminist Scrabble club. We play that if you have three or four of the same letter you can dump them and replace them with new tiles, as long as you keep two of the original letters in your hand. You have to keep two of the “A’s” or “I’s,” but you can toss the third or fourth, if you should be so unlucky. Do you want to play that way?”

“We also play if you can take a blank that’s been played on the board and replace it with the proper tile, you can pick it up, but only if you can use the blank in that same turn. Do you want to do that?”

“And if we both start out with a blank at the start of the game, it will be exchanged a lot more times. Do you want to play that way?”

I hesitated, but nodded yes. She handed me a blank tile to put on my rack before we picked any other tiles. It looked weird sitting there all alone.

“And if you think something is a word, is it okay if you look it up?”

“All right,” I said, “How about fishing for words in the dictionary?”

“That’s not allowed.” Talin was very firm about that. Searching for words that start with “Za” and have an “s” and a “t” in them was definitely not kosher according to the Feminist Scrabble Club of Toronto.

“One more thing,” she said. “Do you want to play that if both people want to dump in tiles at the same time that you can turn in however many tiles you want from your hand and get new ones?”

I drew the line at that. That was making the game too easy. “Let’s play, “ I said, and she picked a “C” and went first.

An hour later, we were still engrossed, neck and neck (but she was steadily leading) with a blocked board that was keeping either of us from doing much of anything. But I was happy. I had never played Scrabble at one of my retreats before.

And it could only happen now because there was enough space, enough time, and because Newbold House had become our home; we were acting like we lived here.

And that was the first night the Scrabble fairy came to call. 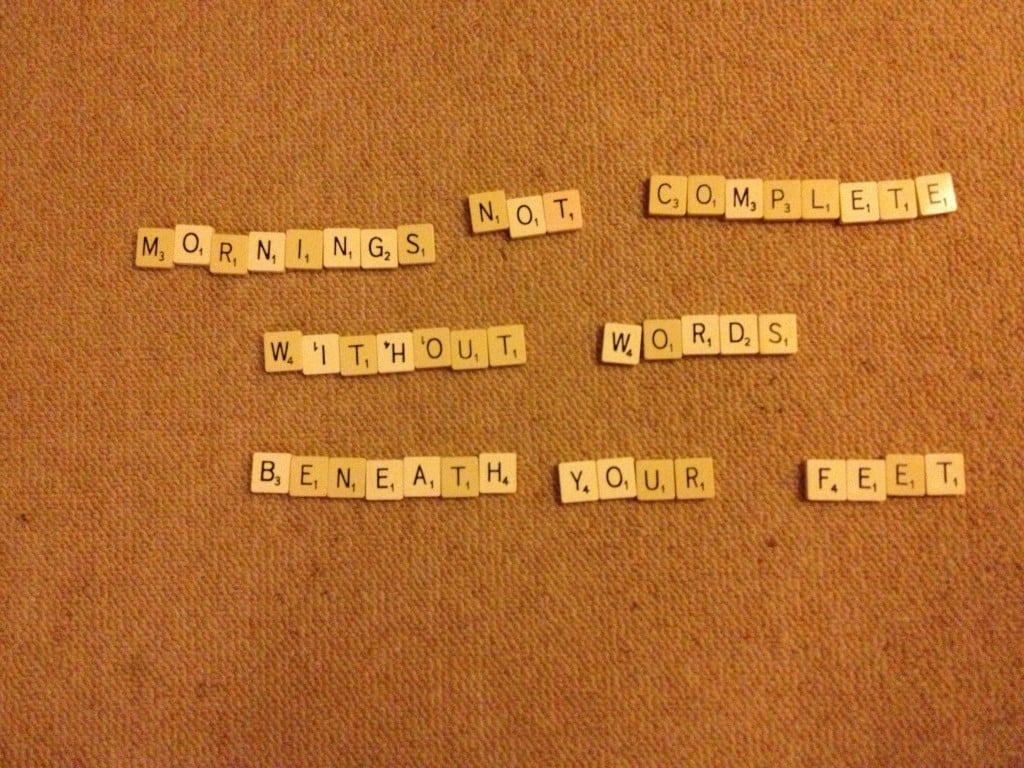 The next night, when a bit of illness was moving through our group, I woke up to this:

I wonder what she’ll come up with next?

Who I am becoming. You can share your response to this prompt below. ... END_OF_DOCUMENT_TOKEN_TO_BE_REPLACED