This afternoon while I was getting my massage I began to feel tired of being the pampered tourist. I don’t like being in the tourist bubble surrounded by local people waiting on me. It makes me feel too much like the ugly American. And although the luxury of our accommodations and the care taken at this resort to meet our every need is deeply relaxing and wonderful on one level, I starting feeling the need and desire to experience something more real.

Tonight I got what I asked for.

At 7:30, Allison and I met up with the two drivers we’d asked for, Kadek and Kadek. They arrived, sans helmets, ready to take us wherever we wanted to go. The older Kadek (still a young man—by my guess he’s about 30) is married with two young children. The younger Kadek is 20, my son Eli’s age, and he was my driver. In Bali, Kadek means second born—and that’s why our two scooter drivers had the same name. 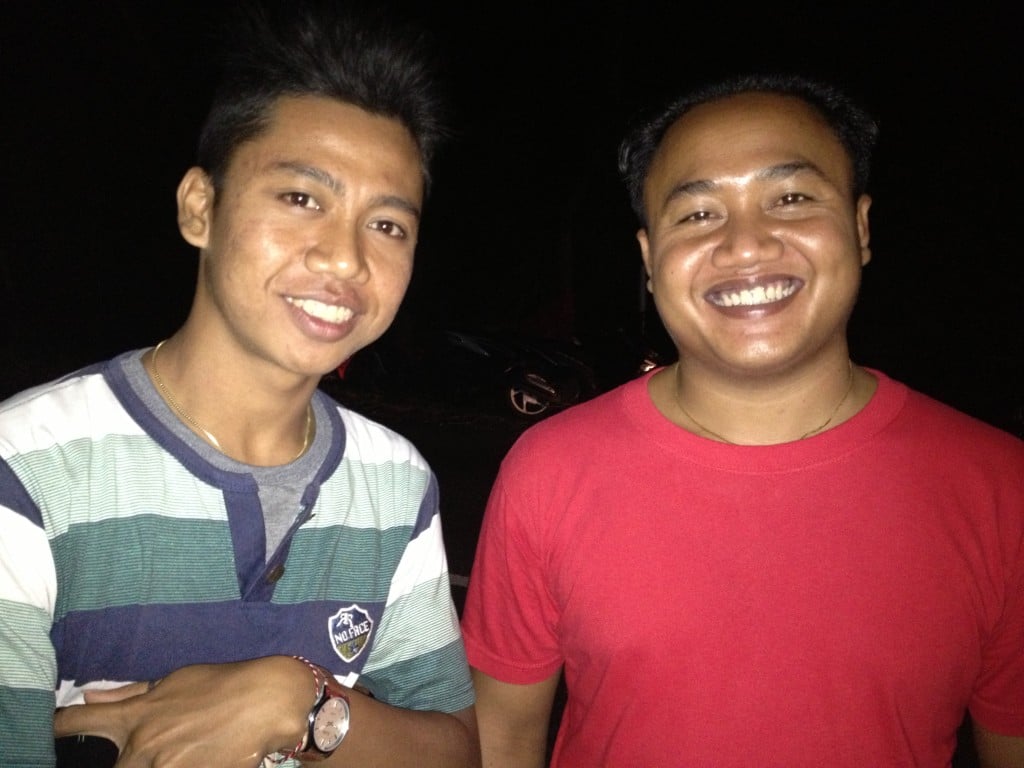 The older Kadek spoke English fairly well. The younger Kadek and I communicated with his minimal English and lots of smiles, nods and gestures. I immediately felt great pleasure wrapping my arms around him from behind as we took off into the night. I imagine that I was hugging Eli!

We told the Kadeks that we wanted to go back to the traveling fair we’d seen on our drive from the airport to our hotel last night. They knew just what we meant–they called it “the night market.” And we were off. I felt perfectly safe behind Kadek driving down the road with no helmet. I know Surya and Judy (our tour leaders) would tell me I’m crazy, but I was happy with the feeling of wind on my shoulders, my arms around a young man my son’s age, laughing and trying to talk but rarely understanding each other.

Allison and I were the only non-Balinese people at the fair. It was a completely local’s scene with a funky Ferris wheel, a couple of throw a bean bag at a stack of cans booths, a mesh fenced ball pit full of scrambling kids, and lots of big outdoor stores selling clothes. Things looked similar to a little traveling fair at home, but everything looked different. This, for instance, was a ride that traveled around the perimeter of the park: 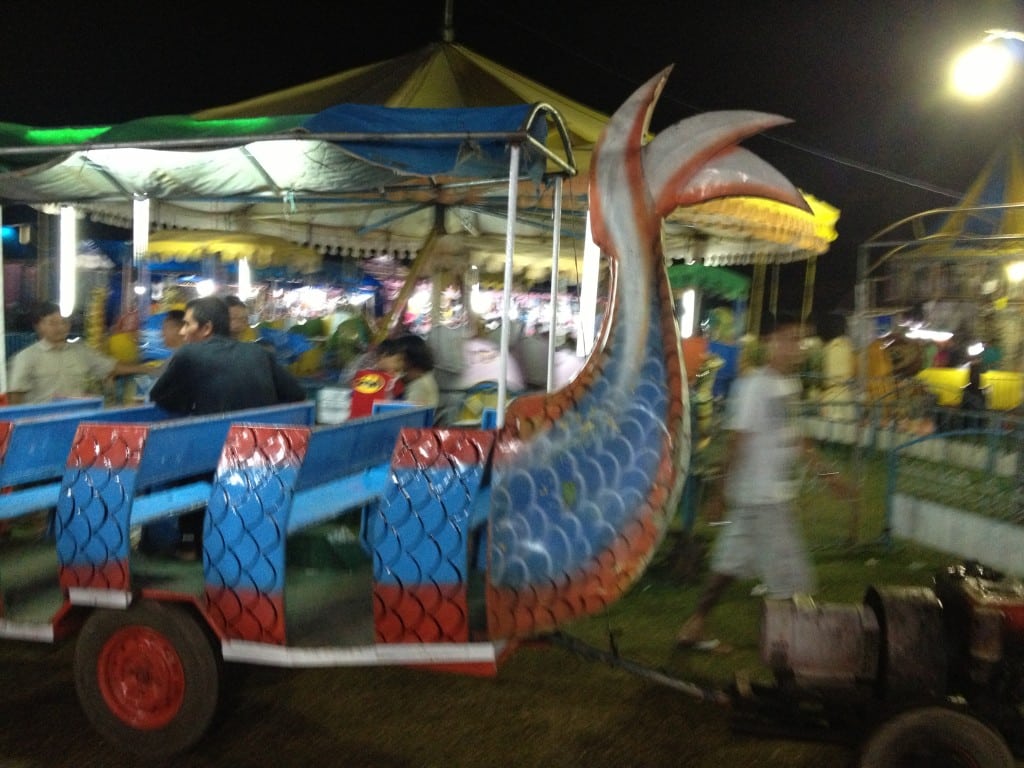 We saw this man running a gambling game that looked like a Balinese version of roulette. And we browsed all the garment stores lining the edges of the field. Allison bought a sweatshirt. I bought three brightly colored cotton diaper covers for my second grandchild-to-be, who’s due in August. 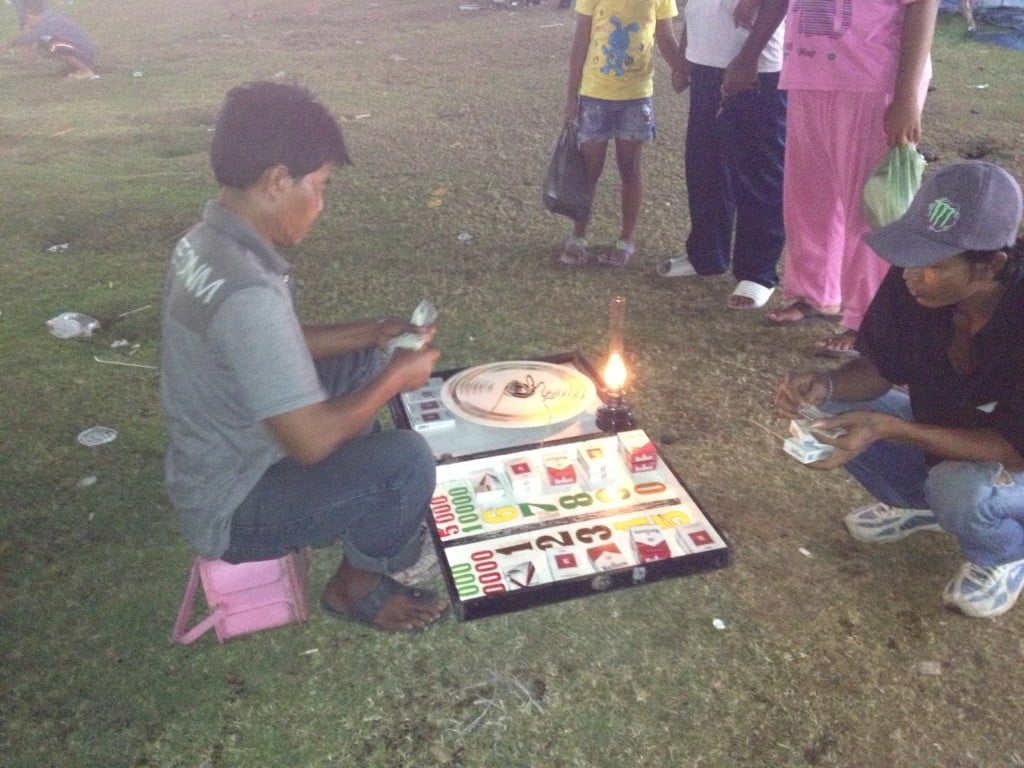 The definite highlight of the fair was paying 50 cents each to climb up a steep flight of rickety metal steps up to the perimeter rim around this huge deep metal pit which Kadek identified only as “motocross.” We had no idea what was up that flight of stairs but it was incredibly loud with the sound of revving engines. The four of us edged our way around to an open space around the pit, among the spectators lining up against a circular railing. This is what the “stadium” looked like before the racers got inside: 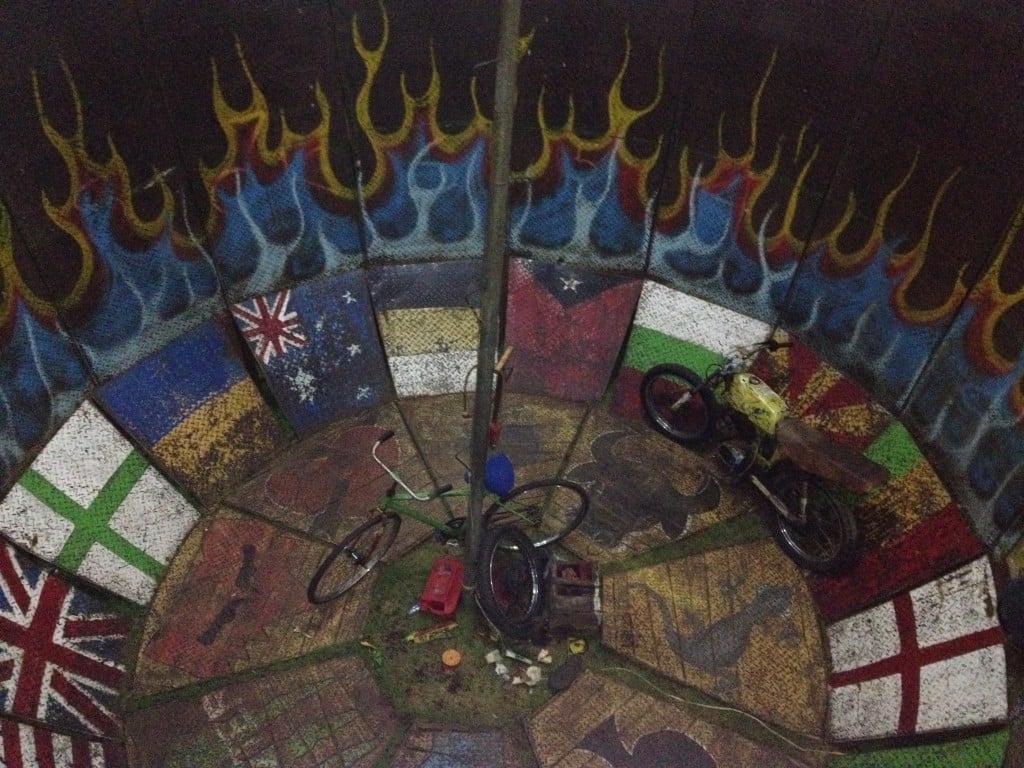 Then a dashing young Balinese daredevil (the older Kadek said these are “the bad boys”) came in with his motorcycle and started driving around the perimeter of the huge metal circle. And before I knew it, he was climbing the walls with the bike, his circles come further and further from ground level, until he was driving right around the rim, WAY UP where we were standing, even grabbing rupiah bills extended out from the spectator’s hands. The noise was deafening and the smell of intense diesel, unbearable. I think the smell (not to mention the noise) would have driven us right out of there if we hadn’t all been so transfixed on this daredevil’s antics. He made huge sweeping arcs of the inside walls, actually riding horizontal to the floor up the walls.

Then he started doing tricks—removing one hand and then two from the handlebars. Then standing on one leg, hooking his legs over the handlebars, all the while the motorcycle making very fast huge loops up and around the walls. It was terrifying and fascinating and I couldn’t wrench my eyes away. This is Indonesian motocross; that’s what I got from Ketut. When I thought things couldn’t get any more extreme, a second young guy started riding a bicycle up the walls of the same huge container and it looked at every moment like the bicycle and the motorcycle were going to crash. It went on and on for a long time, with huge applause when the two finished their “act.” 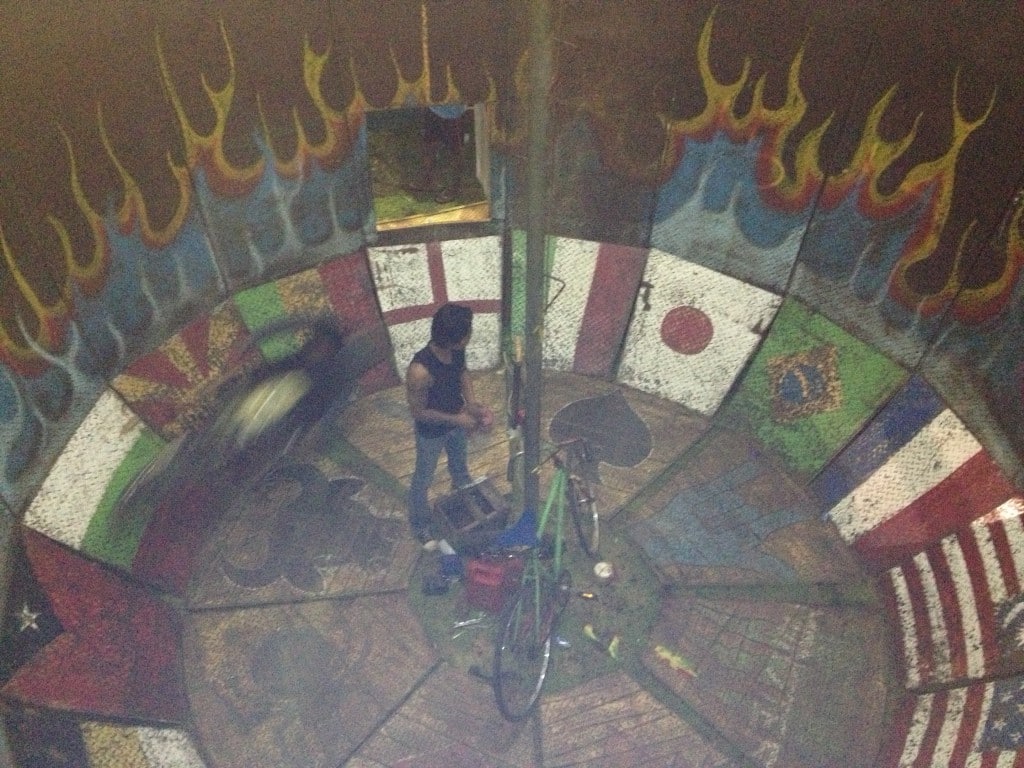 After an hour, we’d pretty much exhausted the possibilities of the fair, but we weren’t really ready to go back to our hotel. The older Kadek got on his cell phone and made a call, and a moment later he said something like, “There’s been a wedding a few towns over and they’re having some dancing after the ceremony. Would you like to go?”

Guess what we said? YES!

Twenty minutes later we parked on the side of the road by a huge underground space with a dirt floor and a corrugated metal roof. It was packed with a couple of hundred (or more) Balinese friends and family members who had attended the wedding. They were eating, and the Kadeks told us we’d have to wait until they finished eating and were ready to start the dance.

So we waited up by the side of the road. While we did that, we shared pictures of our family members on our phones. Kadek (older) showed his two kids, I showed Eli (Kadek, this is my kid your age). When I showed the picture I had of Lizzy on my phone the younger Kadek blushed. “Would you like to meet her?” I asked and he burst out in embarrassed laughter. A moment later he showed us a picture of his girlfriend, a very pretty girl who looked about thirteen. “She’s nineteen,” he told us.

We asked if and when the two of them were getting married and that’s when we learned that you need 4 million rupiah to get married, which is about $4000 dollars, a fortune to a Balinese family. There wasn’t enough language between us to get more of picture of the details of these negotiations and who gets the money, but it sounds like it’s expensive to get married in Bali. And it takes a long time to save up the money to do so.

We could hear the gamelan orchestra warming up, but our wait for the dance to begin stretched on and on. Allison finally said she was tired and wanted to go back to the hotel to bed. So she hopped on the back of the older Ketut’s scooter and headed back, and the younger Kadek, my Kadek, said he’d be happy to wait with me. Now I was the only westerner in sight. This was a real wedding, a real community ceremony, not one staged for the benefits of tourists.

I was sorry I didn’t have sleeves on my shirt or the temple scarf I bought in Bali last year tucked in my fanny pack, so I could be dressed more respectfully, but I didn’t. At least I’d had the forethought to put on long modest pants. I asked if it was okay for me to go in dressed as I was and Kadek said yes.

As we waited, he texted his girlfriend in Balinese and it was so strange seeing him do such a familiar activity in a completely different language, standing out on the street outside a Balinese wedding.

Twenty minutes later, Kadek said we could go in. He led me down a wooden ramp into the underground pavilion. There were several hundred people milling around, from small infants to old people. The place was full of kids and families. Kadek warned me to keep my hands on my fanny pack, but I already was, I’m no fool.

The dance that followed lasted for more than an hour and was the most spellbinding thing I’ve ever witnessed. Different young girls or women of different ages would fall into a trance and begin wielding a sharp knife, known as a kris, against their own breasts in a circling stabbing motion, their eyes closed. Others, often a group of young boys would encircle the stabbing girl (or woman) and yell at her, exorcising the demons that were possessing her. The girls or women sometimes fell down or suddenly spiraled across the room and the focus of the whole dance would shift again.

First one girl would grab the kris and gyrate with it again her chest, and then another and another. Sometimes there were four or five different centers of activity in the room. The dancers often had their eyes closed, and others standing nearby to make sure they didn’t fall over or into the musicians. The music never stopped, driving the dancers deeper into a collective frenzy. It was as if the whole community was in a trance together. The energy was so powerful, I began weeping.

From the little bit Kadek could communicate to me, this dance has to do with exorcism of evil. And he said this particular dance was performed much longer than usual. He made it clear that is a very spiritual, very special dance. We agreed I was very lucky to see it. And when he dropped me off, I tipped him with all the Balinese money I had with me. I wish it had been more.

I tried looking up using the name of the dance he gave me (Deweyu dance), but I couldn’t find anything. But I did find this information about the kris.

I can’t wait to see Surya (one of the guides on our writing/yoga retreat) when the writers arrive in ten days. He’s a master of Balinese dance and I can’t wait to ask him all about what I just saw tonight.

I’ll let you know what he tells me, I promise.

9 thoughts on “Virtual Vacation: Chance of a Lifetime, Bali, Day 7”