When I got to the airport in San Francisco at 9:30 PM, ready to check in (and wait) for a 1:15 AM departure, I made my way up to the ticket counter and was immediately relieved that my bags were not overweight. The agent took my passport and my ticket but then she kept typing on the computer with a quizzical look on her face.

Finally, as the passengers all around me were being processed and leaving the counter with their boarding passes, she called over her supervisor, and he, too, began typing into the keyboard and staring intently at the screen I could not see. I stopped listening to Gregory David Robert’s Shantaram on my ipod, and pulled the headphones out of my ears. “Is anything wrong?” I asked.

The young clean-cut supervisor looked up at me. “You need a visa to travel to Australia. Do you have a visa?”

It was one of those heart-sinking moments when you suddenly realize you’re totally screwed. I’m not a sophisticated traveler; it is only now in mid-life that I am really branching out and extending my adventures around the world.

It never occurred to me to check to see if I needed a visa to go to Australia. They’re our friendly allies; they speak English; couldn’t I just stroll right in? None of the countries I’d been to before had required a visa, or if they did, it was a simple purchase upon arrival. No big deal. Besides, I had a travel agent book this trip for me; if I needed a visa, shouldn’t she have told me?

So here is traveler’s advisory #1: Yes, she should have told me and yes, it is always my responsibility to make sure I have what I need. It’s not the travel agent who’s going to be turned away at the border (or in this case before I even board the plane). It’s me.

As images of retreating to a hotel and never making it to Australia at all—and the embarrassment that would follow—the agent told me that Australia is one of two countries in the world (Singapore being the other) where you can purchase an instant visa online.

So I made my way to a chair, pulled out my laptop (thank goodness I had it), logged into the shaky SFO free wifi (after having to watch an interminable ad featuring a dancing peanut) and Googled “Australian electronic visa.” 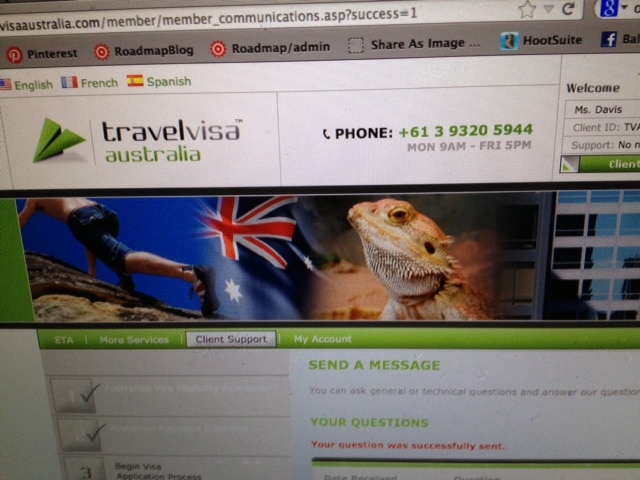 I filled out the form, paid my 40 bucks (thank goodness I had a credit card), and was told I’d get a return email with the confirmation info I needed. The agent had told me it would only take half an hour, the website said it could take up to 24 hours, so I did have to sweat it out until that email came flying into my inbox with a relieving zing.

The wifi died twice while I was trying to download the PDF and get it to display on my screen, but it finally did. I waited in line all over again. This time, I was rewarded with a two boarding passes—one to Singapore and the second to Australia.

If I’d been traveling anywhere else in the world, I would have been totally screwed. I just got lucky.

Traveler’s Lesson #1: Be absolutely sure you have your papers in order and don’t delegate this task to anyone but yourself.

Traveler’s Lesson #2: There are reasons it’s a good idea to arrive at the airport with plenty of time to spare.

Tell me the story of an ancestor, someone from your lineage who touches or inspires you through ... END_OF_DOCUMENT_TOKEN_TO_BE_REPLACED