On my last free afternoon before the retreat was due to begin, Eileene and I decided to hike out to the local distillery for a tour. Christopher from Newbold House gave me a long set of walking instructions that included passing over a dam without water, keeping a stream that we hardly ever saw on our right, and finding a pathway where a railroad track used to be.

It was a glorious day and a wonderful walk. Here’s just some of what we saw along the way: 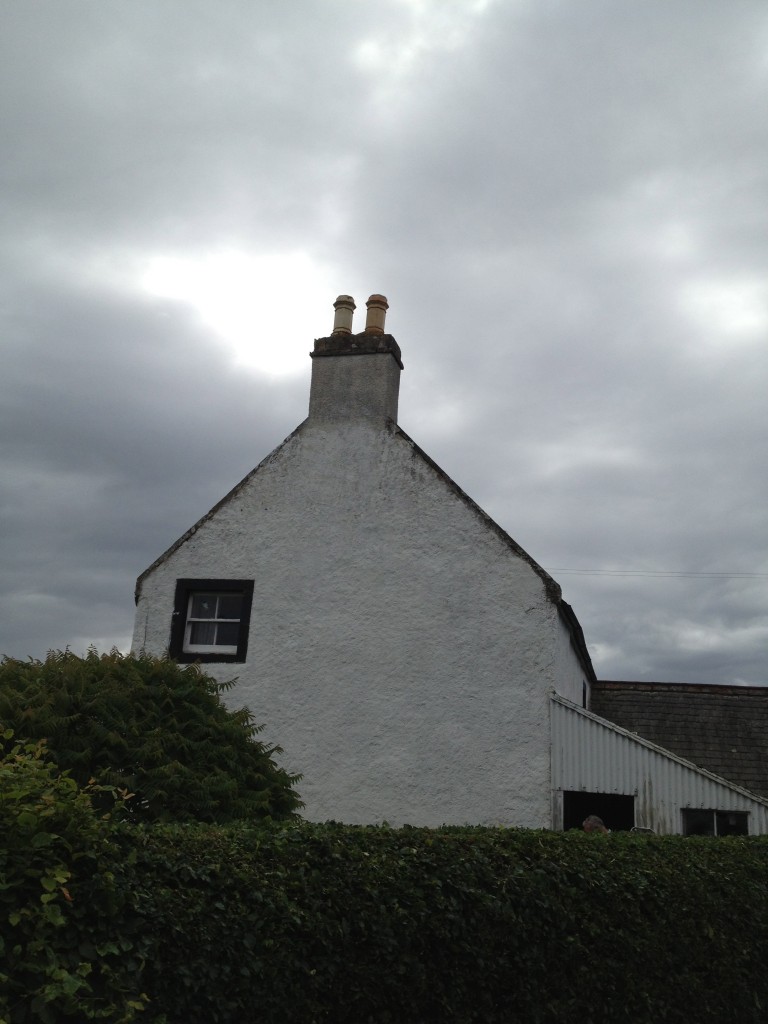 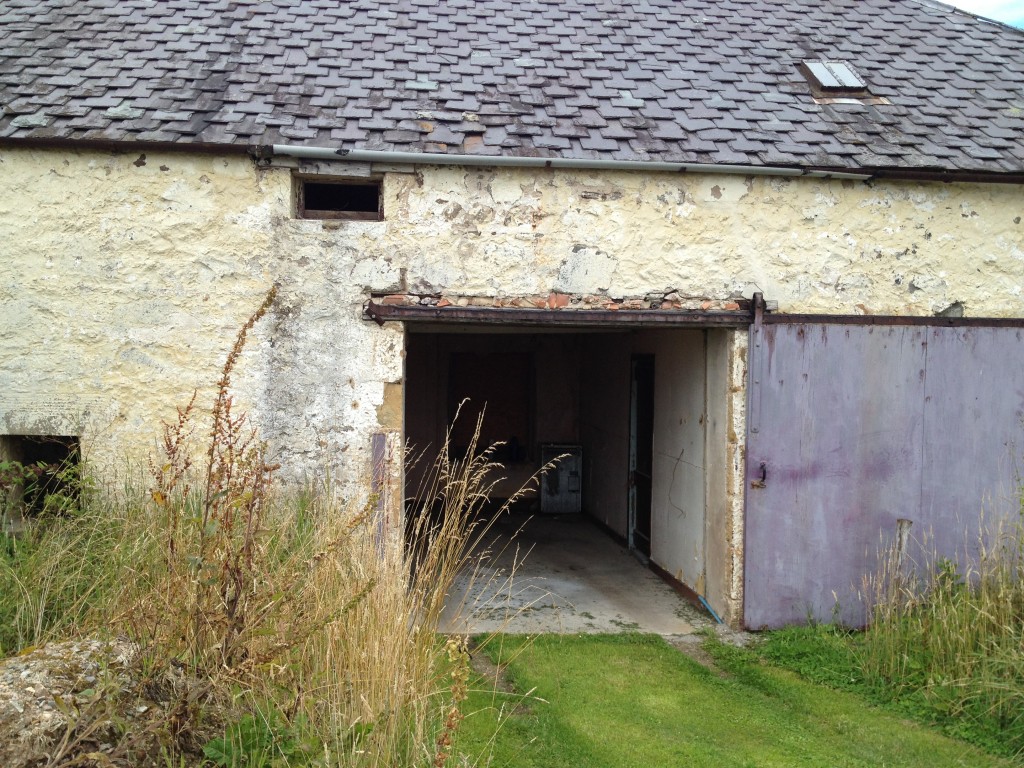 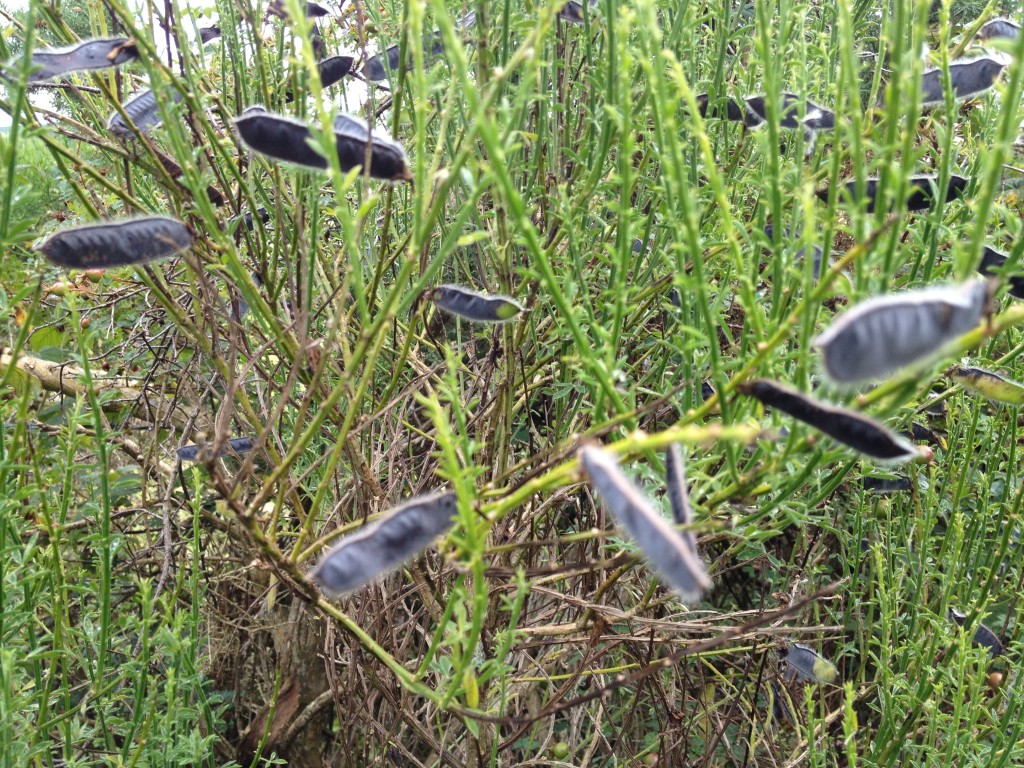 After we passed the dam without water, we reached a fork in the road that we had not anticipated. We debated which way to go and went right, but then we came to another fork and went left. We weren’t sure if we were headed to the distillery at all, but it sure was a pretty walk. 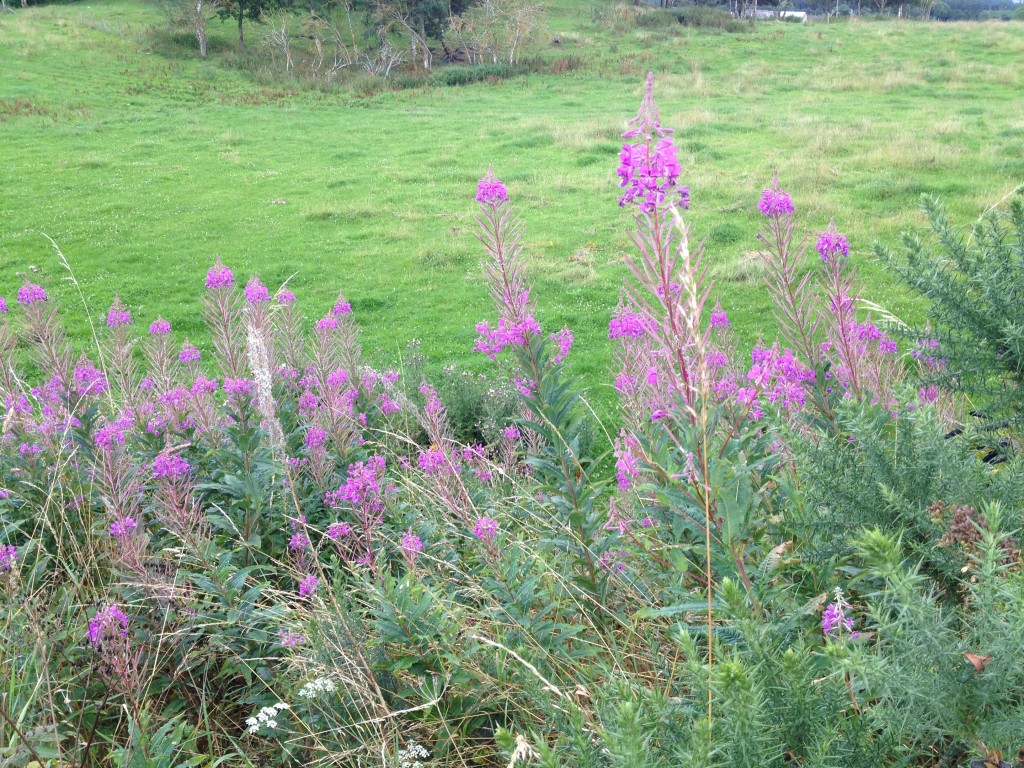 After another twenty minutes or so, we came to another crossroads and once again, nothing we saw matched the directions I had jotted down in my little notebook. I was sure we had taken a wrong turn and should go back. Eileene wanted to press ahead. Basically, we had no idea which way to go. Then Eileene looked up and noticed a whisky bottle sitting up on top of a post: 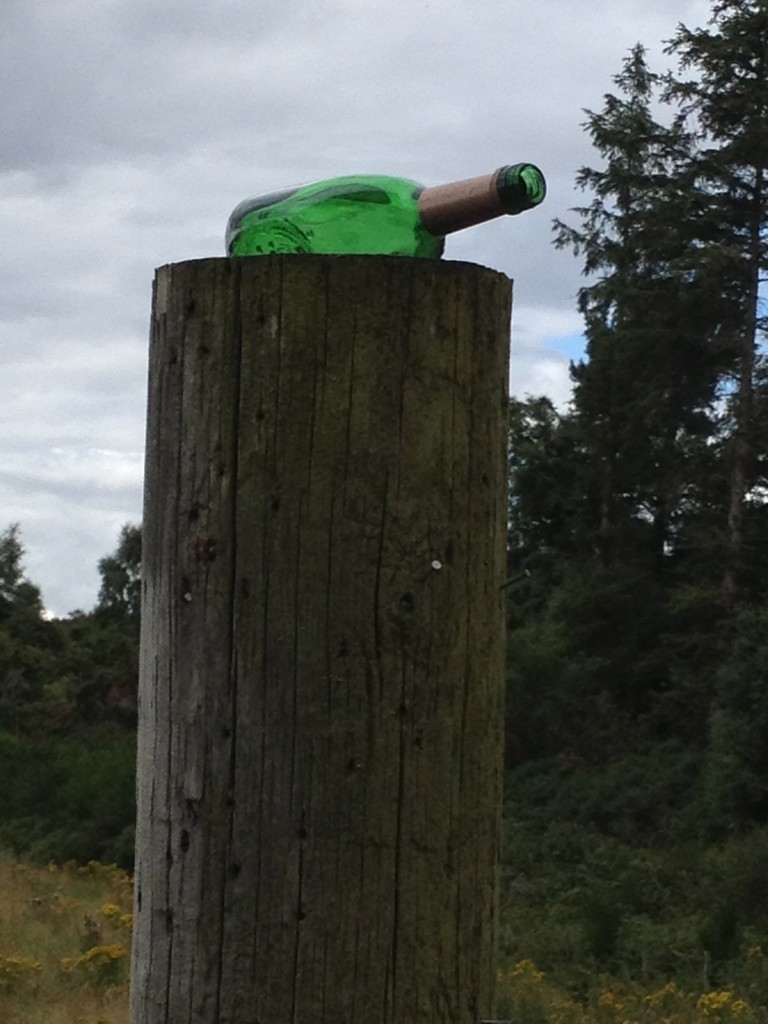 “Well, let’s go the way it’s pointing,” she said. And I laughed. The mouth of the bottle was definitely pointing off to our right.

Just then, from that very direction, we heard voices. It was a family hiking through the woods—a father, his very pregnant wife, and their little girl. “Excuse me,” I called out, “We’re looking for the distillery.”

“Are you now?” he asked in a thick Scottish accent, a wry smile playing across his very handsome face. Then he walked down to where we stood and told us how to get there.

Five minutes later we were on a wonderful path and reached this magnificent trestle: 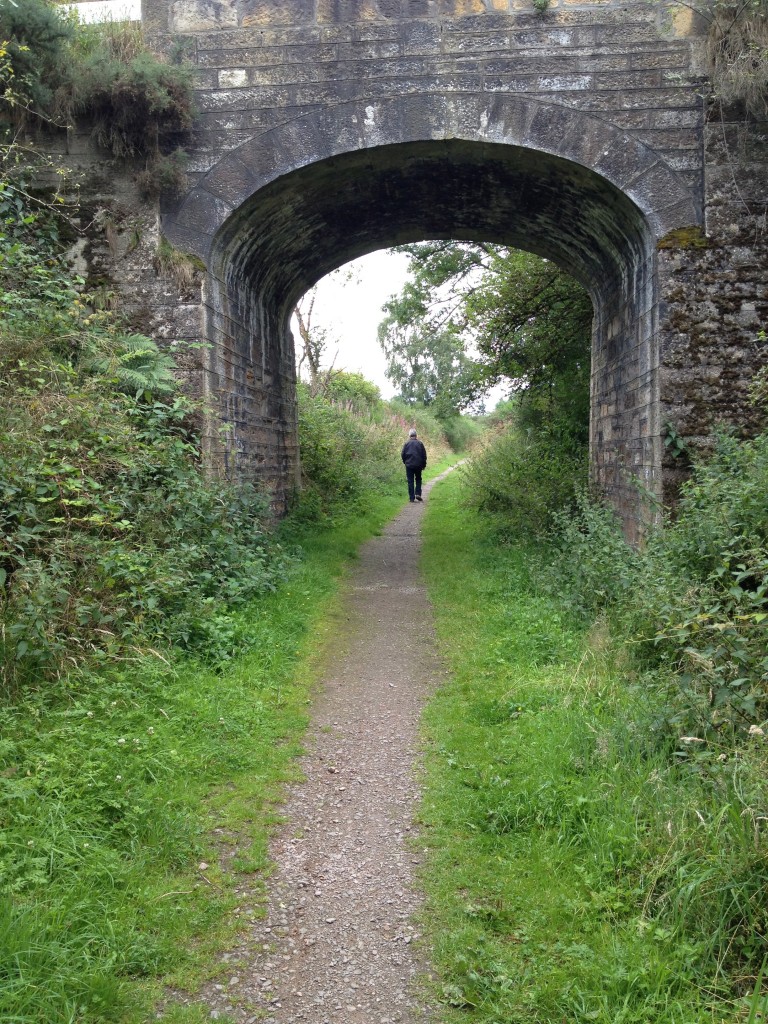 And ten minutes beyond that, we came upon the huge brick chimney of the Dallas Dhu Distillery.

Dallas Dhu was built in 1899; it is the oldest surviving Victorian distillery in Scotland. No longer a working distillery; it’s a museum of the whisky making process with a self-guided walking tour. For five pounds, you get an audio guide and a dram of whisky at the end.

Here are some of the basics of whisky making, according to the official souvenir guide I bought at the gift shop (Since I couldn’t buy whisky—it would never fit in my suitcase—I bought the book instead.) Here’s the short version of how it’s done: 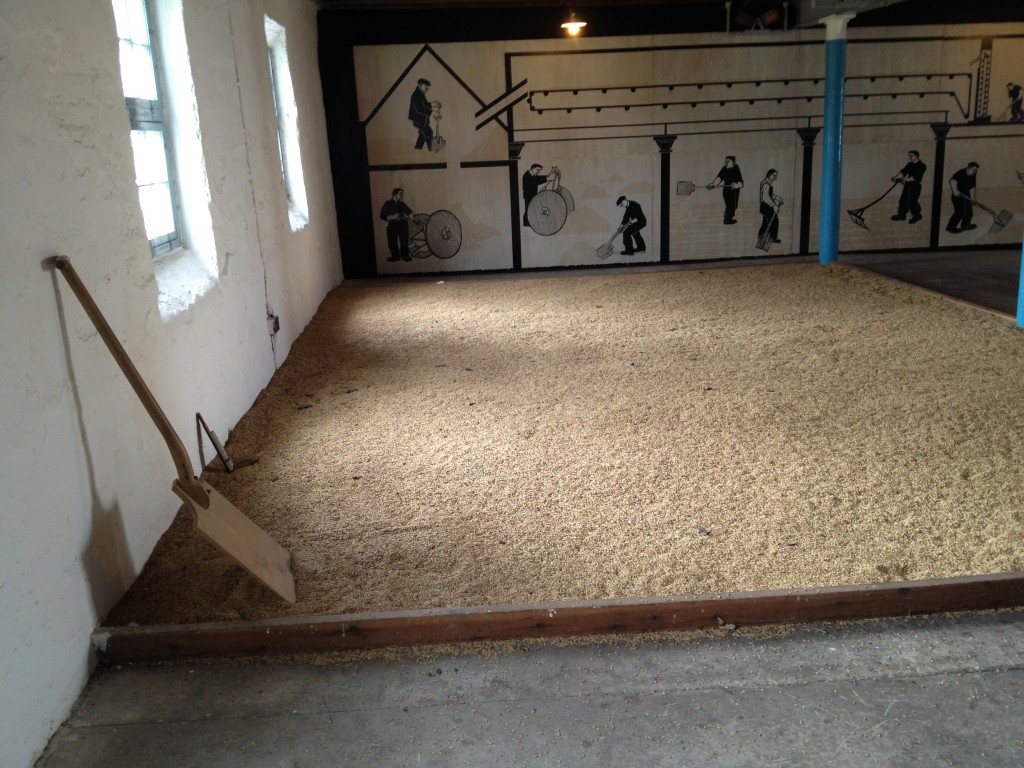 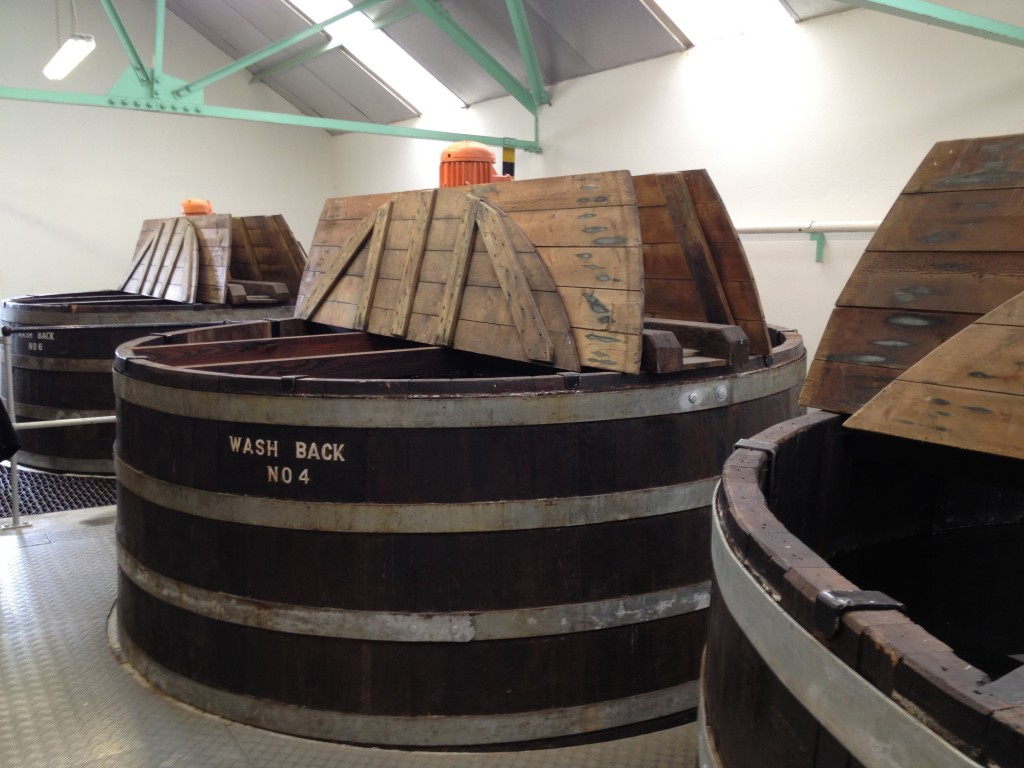 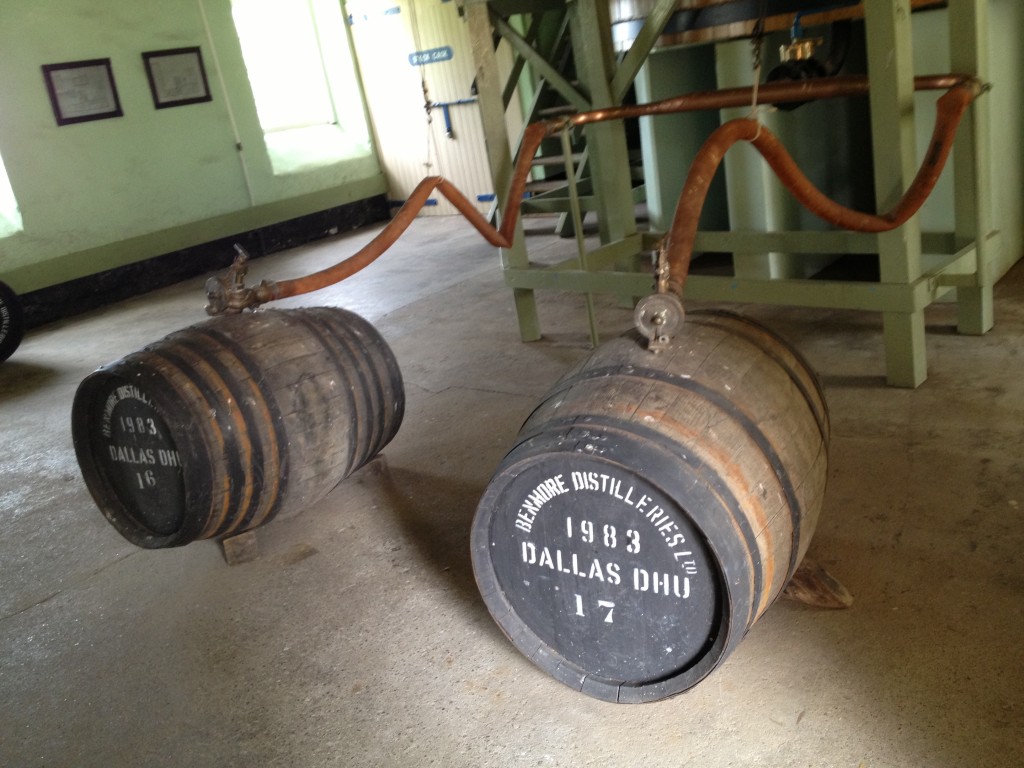 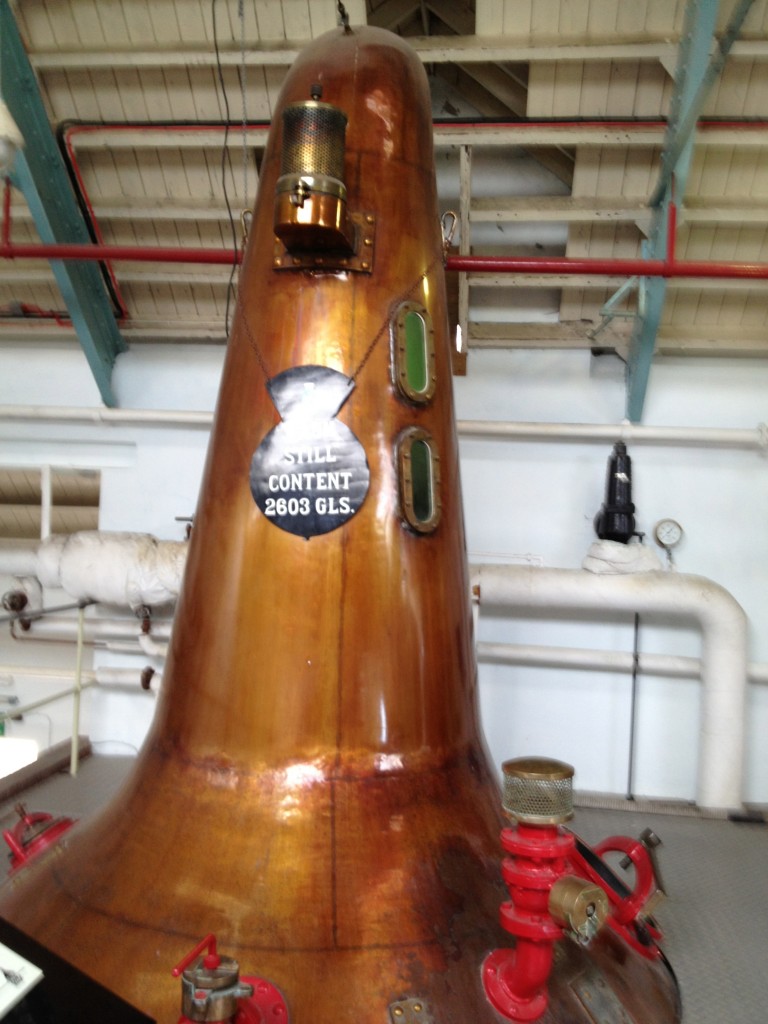 The still house is the heart of the distillery. This is where the art of the stillman comes in. During distillation, it is his skills that are needed to turn the weak alcohol wash into the unique character of each malt whiskey.

We both agreed it was a great tour. The equipment was impressive; the complexity of the process, staggering. It was hard to believe that a processor could come up with the same taste, the same distinctive flavor every time.

At the end of the tour, after we turned in our audio joy sticks, we were each poured a dram of whisky. Being experts by now, we put in the requisite drops of water to bring out the flavor. I had my sips of whisky with a ginger-chocolate bar; Eileene had hers with ice cream. As we enjoyed our libations, we watched the movie they had at the end of the tour—a fun romp through the world of whiskey making.

And then we took the long walk home, both knowing this would be the last “tourist” outing we’d share together on this trip.

By the time we reached Newbold House, it was time for dinner—and three more of our group members had arrived.

The retreat was about to begin.