Today, I decided to catalogue the world’s greatest salads. I hadn’t intended to do that, but after the salad I had today in the London Heathrow airport, I felt compelled to start a list.

Today’s salad, at a large sprawling restaurant called Giraffe, was called the Super Healthy Veggie and Oregano Feta Salad. It included marinated feta, broccoli, sugar snap peas, alfalfa, borlotti beans, avocado, bulgar wheat, toasted seeds, rocket, cherry tomatoes and baby spinach in an herby salsa verde dressing. It clocked in at 676 calories (a factoid on the menu) and cost just under 10 pounds. Eating it gave me a whole new lease on life after a night of cramped international travel in cattle class, crammed up against the window. I don’t know if you can tell by looking how fantastic it was, but you might get at least a clue: 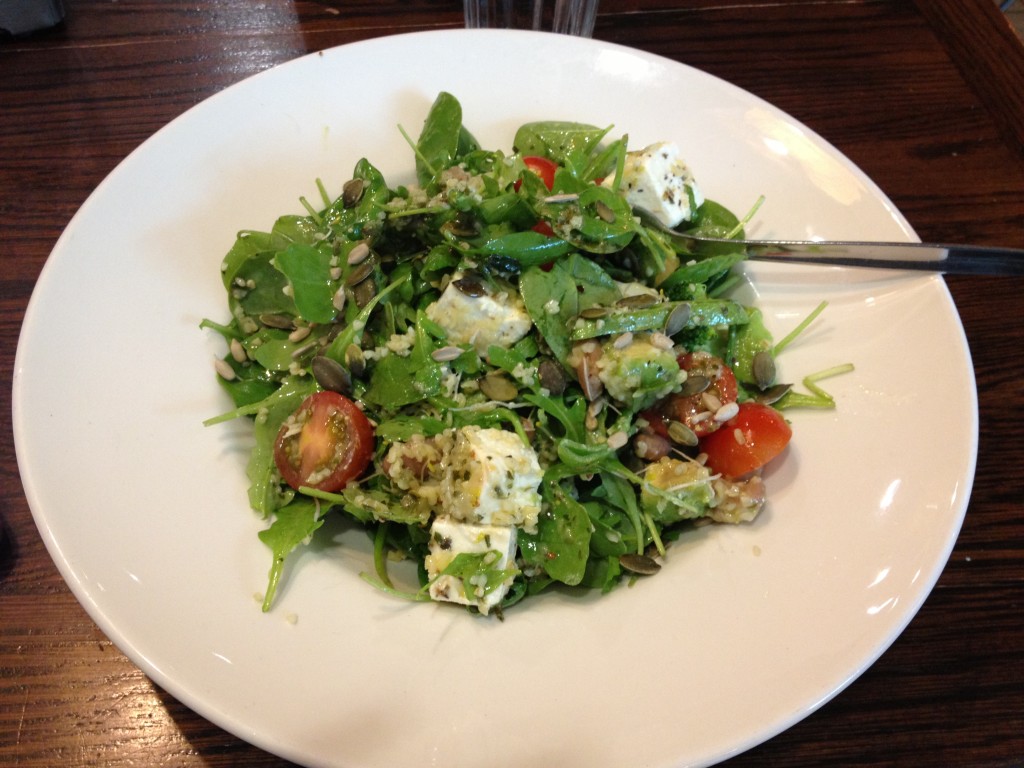 Just so you know, my other favorite salads this year have been The Gardener’s Dinner at Dharma’s in Capitola, California (which I can eat any time—it’s just ten minutes away), the Quinoa/Tofu salad at Flour, my son Eli’s favorite eatery in Cambridge, Massachusetts, and the amazing life-giving Meg’s Big Bowl that Karyn and I devoured in Ubud, Bali at Kafe, which actually tasted a lot like the divine plate of the Gods I ate for breakfast today (It was about 6 AM for me and early afternoon in the UK) when I ate the Super Heathy Veggie salad at Giraffe.

As soon as I got up from my meal, I ran into this familiar landmark, since both my children are obsessed with Dr. Who. It was actually a photo booth where you could take Dr. Who-ish pictures inside—but I didn’t have time to stop. 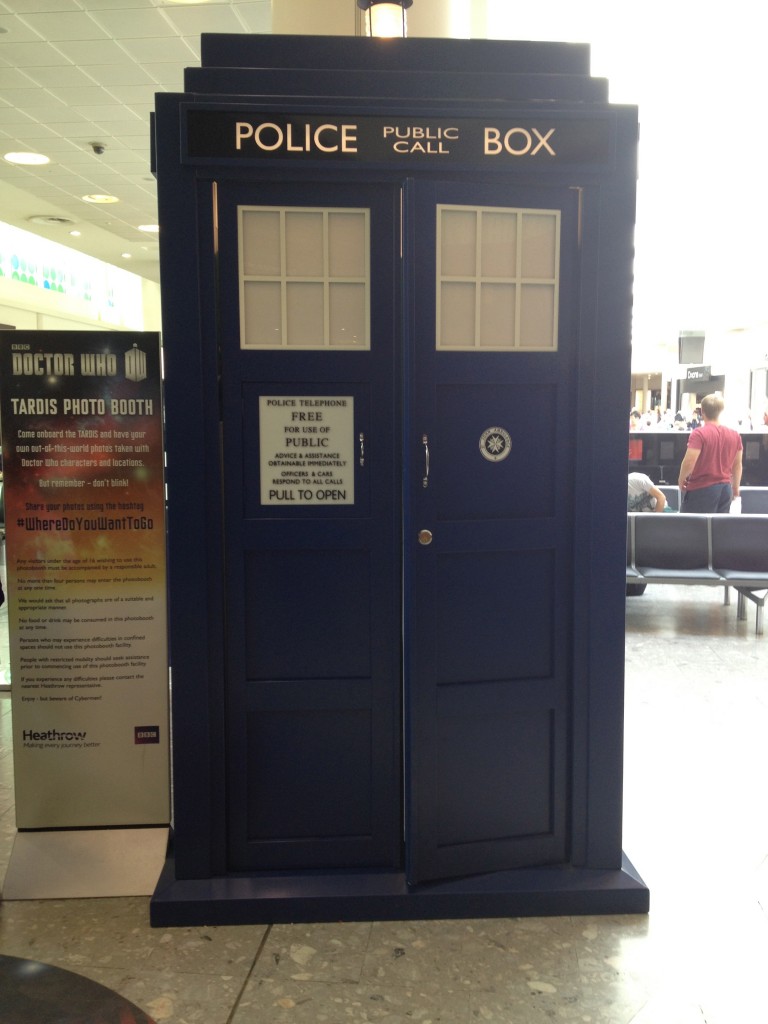 But still, it wasn’t until I reached the boarding gate for the Virgin Atlantic “Little Red” flight from London to Edinburgh that it began to sink in that I was really going to a brand new country, somewhere I had never been before. It was when I head a father speaking to his two young sons in the lounge in what first sounded, to my unaccustomed ears, to be a completely foreign language. But as I listened more closely, I could recognize an English word or two—but only barely—his brogue was so unfamiliar to me.

Once we boarded our commuter flight for the hour-long flight to Edinburgh, the instructions from the cabin attendants all sounded to me as if they were on tape delay. I’d hear the words, but it would take an extra second or two for my brain to make sense of them.

And that’s when I truly began to smile. Despite the five hours of sleep, being woken up at 3 AM to land in London, the fact that I’d slept in my clothes and hadn’t brushed my teeth or my hair—I was embarking on another adventure!

As we taxied to a landing, I looked out the window. It was a rainy afternoon in Edinburgh. I pulled on my fleece shirt and as I waited to deplane, the Beatles Here Comes the Sun blared over the tinny speakers of the small plane.

As I walked toward the baggage claim, there were all the normal duty-free shops, but right in the middle of the passageway was a tasting booth for Scotch. I don’t normally drink Scotch; I have maybe four or five times in my life, but when in Scotland….I already knew I was going to drink Scotch. Supposedly they make the very best in the world. 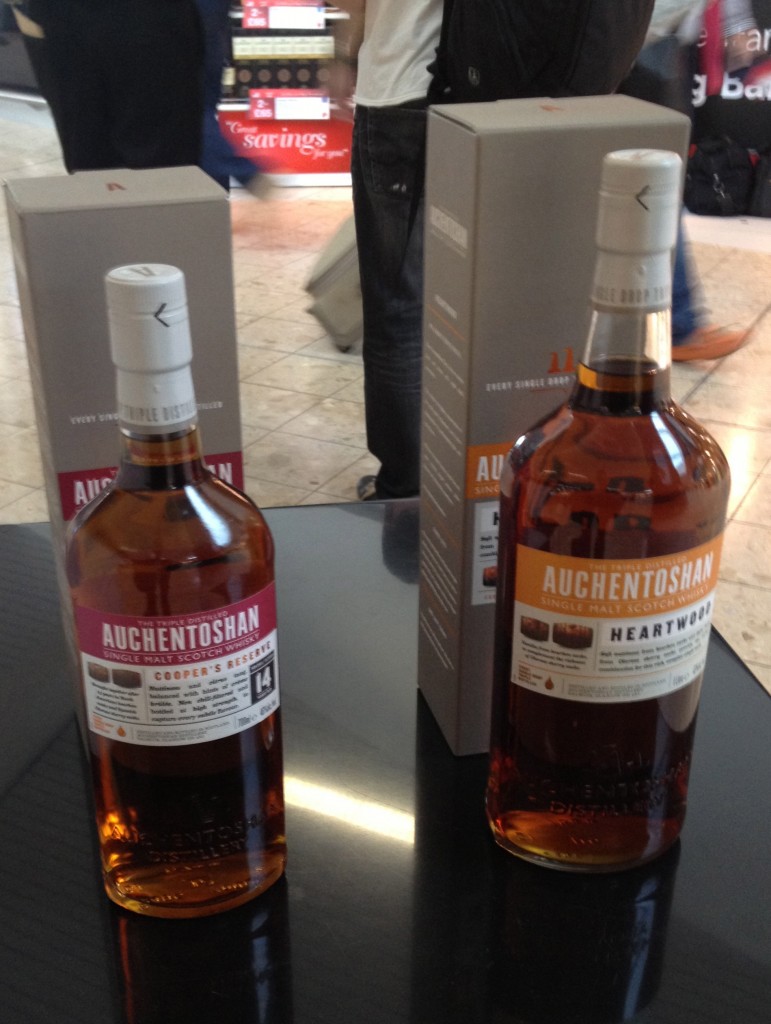 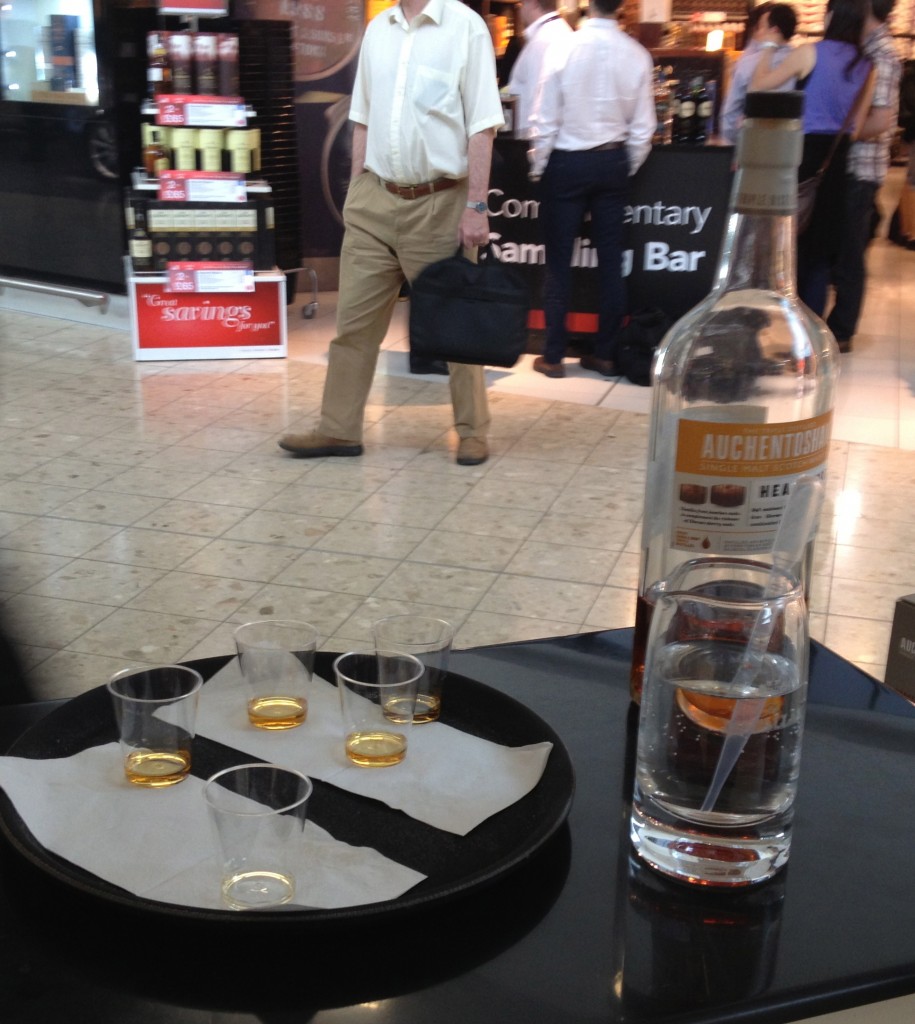 So I ponied up to the booth and picked up one of the tiny little plastic sample cups with just a swallow of Auchenstashan: The Triple Distilled Single Malt Scotch Whisky. Drinking it was a smooth, slow burn. I wouldn’t have any trouble sampling more later on, I could tell already.

As I continued through the maze of the airport, huge wall-sized billboards greeted me: 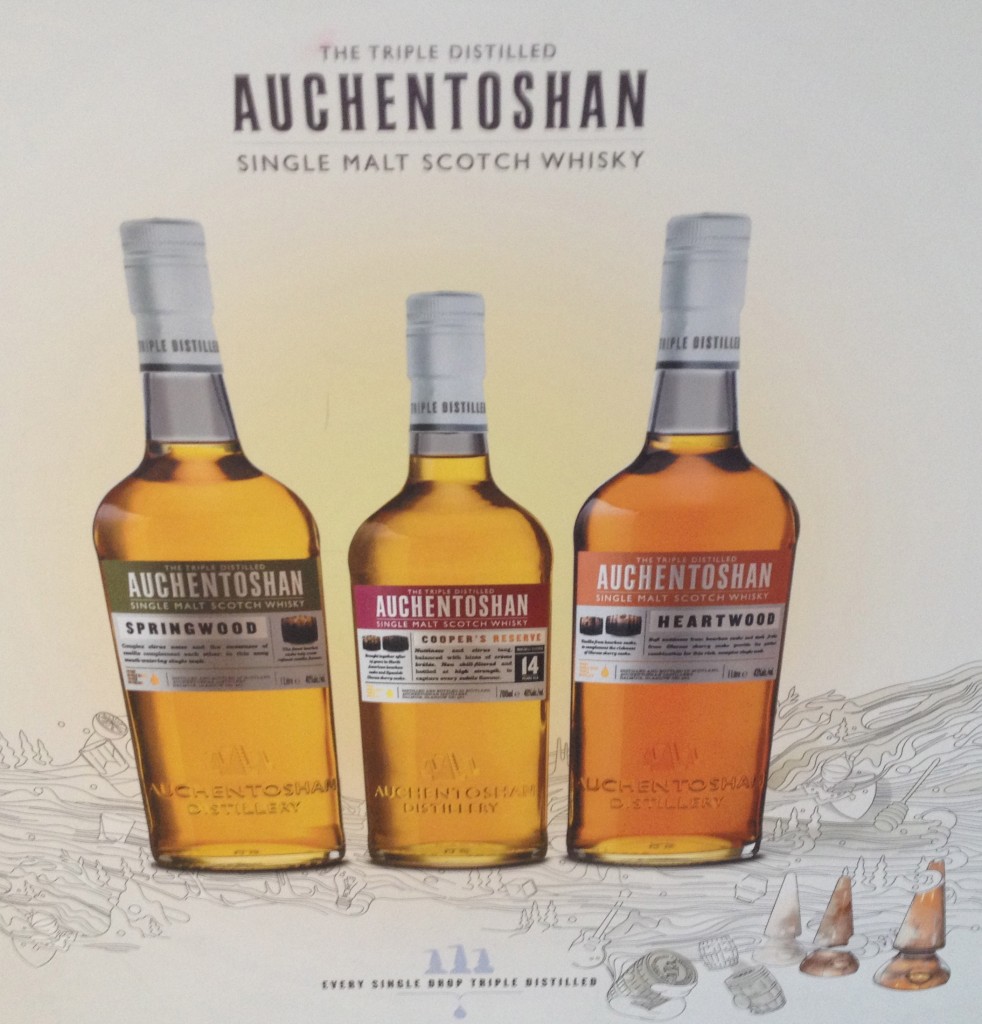 I had definitely entered the land of Scotch.

As I moved through the airport and gathered my bags, I could feel another transformation taking place, this one inside of me. As soon as I landed, I could feel myself changing from my groggy spaced-out grungy traveler self into a travel writer. My senses suddenly became alert and I started paying attention to everything happening around me—not just paying attention, but looking intently for what was different, unusual, funny, quirky or odd, all from my unique perspective of being a 57 year old writer/mother/human being from Santa Cruz, California.

I slipped a small lined notebook, a quick writing pen, and my iphone (doubling as my camera for this journey) into the front pocket of my theft-averting fanny pack, for easy access.

On the long cab ride into town (a black rounded luxurious cab with seating inside for six), I started jotting down notes of everything that tickled my fancy, everything that appealed to my senses, everything new. I immediately began forming questions in my mind—something I call my personal curiosity list. I started writing down the names of shops and things I read on signs. I started engaging with my world fully and as I did, here are just some of the things I noticed during the first five minutes of the drive:

Drivers were sitting on the right side of the front seat and they were driving on the left side of the road. There were lots of people out walking in the rain. Some held black umbrellas or wore all weather coats, but many were walking slowly in shorts and tee shirts, in no hurry to get out of the weather. A woman jogged by sporting a blond ponytail. It reminded me of my two years in Ketchikan, Alaska where rain was a daily fact of life—when it rains 13 feet a year (yes, feet!)—you just learn to do everything in the rain. Like Ketchikan, like Edinburgh. These people were not weather sissies. And I was determined not to be one either.

I love traveling with a travel writer’s eyes. When I do, I live more fully, I pay attention to what is going on around me, I move out of my own head, and I naturally embrace a spirit of adventure and wonder. It’s fun. It creates a vivid record of my travels—both for me and for my readers.

In my life at home, I am often preoccupied and fail to notice, but when I travel, it’s almost as if I put my superpowers on. All I need is my little notebook, a pen, and a camera—and later on the technology to send it all back to you.

It’s like slipping into another skin—a skin that fits me more and more with each trip I take. And it adds a whole dimension to travel that I am growing to really love.