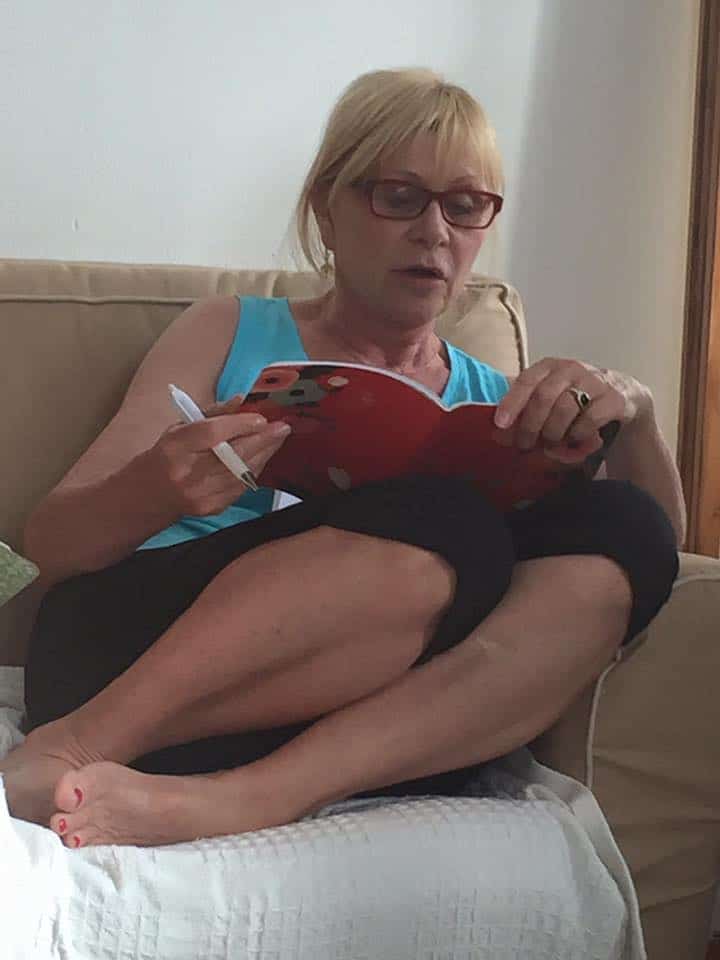 Here’s another wonderful response to the prompt, “Since I’ve Come to Greece,” this one from Joyce Bartlett, from Marblehead, Massachusetts:

I’ve seen landscapes that look nothing like the place I wake up in most mornings of my life, even the water, the same H2O that I can see from my bedroom window, has been transformed into something bluer…or greener…or some indescribable turquoise that I think I have in my paintbox at home. I’ve seen leftovers of civilizations that had running water and toilets thousands of years before anyone else thought to do it, and art that brings tears to my eyes and makes me want to drag out an easel and paint something I’ve never painted before.

Since I’ve come to Greece, I’ve heard fruit sellers singing sales pitches into the dusty city streets of Athens, birds, and wind at Milia loud enough to play an ancient stone building like a lyre. I’ve heard friends howl with laughter while covered in mud, and music from an instrument I can’t name but saw as an old man played it in a doorway.

I’ve heard dozens of languages that I can’t translate, but I can tell you what those strangers were feeling or point out who they were flirting with. I’ve heard stories and poetry written by beautiful women who were strangers in May and friends in June.

Since I’ve come to Greece, I have smelled herbs growing on a hillside and vegetables baking in cheese and oregano in a stone oven. I’ve smelled donkey dung and wildflowers and olives. I’ve had a whiff of ancient civilizations and waiters’ cologne and ocean. I’ve smelled sulphur on a sleeping volcano and coffee sneaking out of the doors of coffee shops. I’ve smelled herbal tea brewing, tea grown on a hillside a stone’s throw from the teapot, and the smell of plants and earth after a rain at Milia.

Since I’ve come to Greece, I have tasted onions sweet enough to entice me to eat them and tasted some kind of freedom that I can’t quite identify. I have tasted Baklava to die for and water, that runs from mountain springs out of stone fountains and tastes like water should taste but doesn’t, because we never drink water that hasn’t been altered in one way or another.

Since I’ve been in Greece, I’ve felt happy and full and exhausted and excited. I’ve felt worried and annoyed and frustrated and delighted. Since I’ve come to Greece, I’ve felt thousands of stones under the soles of my shoes and the palms of my hands and felt the rolling movement of the ocean on ferries and fishing boats.

Since I’ve come to Greece, I’ve felt welcomed by strangers and free to read what I have written because there is no criticism, judgement or assumptions.

Since I’ve come to Greece, I’ve met people who are passionate about the environment, politics, writing, cooking, eating and living. I’ve met strangers who live in the same town I live in, people who escaped from their homelands, people who wear body art to celebrate their lives and the women they have known.

Since I have come to Greece, I have savored the adventure, the landscape, the differences. I have savored the tastes, the colors, the history and the people– those I am traveling with and those who have dropped in and out along the way. I have savored the irresponsibility, food cooked by someone else and the thousands of things to look at and tuck away into memory for another time. I have savored the sharing, the getting to know people, the time spent with friends I would never have found if I hadn’t filled out that form.

Since I have been to Greece, I’ve learned that toilet paper does not get flushed down the toilet, that some things cannot be translated into another language.

Since I’ve been in Greece, I’ve learned that it doesn’t matter where I am, I will still get cranky if you don’t feed me or let me get my sleep. I’ve learned that there are amazing stories that have yet to be written, but the authors need to take big risks to give them to us–stories are a precious gift.

Since I have come to Greece, I have tasted orange juice that is much more than the juice of an orange. I have made friends that will be hard to leave behind even though I am longing for my own bed.

Since I have come to Greece, I feel younger and better, which is really weird because I’m tired. Since I’ve come to Greece, I have been terrified in a big tourist bus careening down switchbacks to leave the gorge that I hiked all the way, even though it was really hard. I feel relaxed and like something may be shifting inside my head. I’m not sure hat it is, but I’m willing to wait for it to finish.

Since I’ve come to Greece, I’ve been present and open and, as corny as it sounds, I feel very alive.