After lunch, most of our group opted to take the bus back to Agua Calientes to shower, rest, shop, go the local museum or do whatever they wanted. But a hard-core group of eight of us (plus Brenda) who really like to hike had bought a second pass to go back in in the afternoon.

Huaynapicchu, one of the many mountains that make up Machu Picchu was crystal clear. The path was all uphill. I started practicing the rest step lock that Brenda had taught us for uphill climbs. You fully straighten the leg you stand on before going on. It puts the pressure of the walk on your skeleton and on your bones, instead of on your muscles. Less lactic acid builds up in your knees and you experience less muscle fatigue. It took all my concentration to practice it, but it felt good. I walked very slowly.

As we turned left on the Inca trail, some of us decided to walk in silence. It felt good. As soon as I stopped talking, all the other sounds came into focus. In writing class during the week we were at Sach’a Munay, one of the things I had my students focus on was sounds—because including sounds helps people create vivid scenes. I guided people in putting themselves back in a scene, and helped them remember what sounds had been in the foreground, what sounds in the background. After I opened class with a meditation, I often asked them to listen to sound. And now that I was silent, that’s what I was paying attention to, too: the heavy, jagged sound of my breathing; my rubber ticket walking stick tapping on the ancient stones; voices in many languages cascading out of the mouths of people passing me in the downhill direction; the very distant mechanical sounds of construction equipment very far away; my footsteps clambering up in my REI hiking sneakers; running water from a nearby stream; the pounding of blood between my temples; my pants legs rubbing together; water far, far below; all kinds of birds—solo and in conversation; after a long time, the repeated whistle of the Machu Picchu train; the sound of metal wheels against metal rails; one woman even talking on her cell phone on her way down the trail. The only words I spoke were a soft, “Buenos tardes,” to the people who greeted me on the trail. Even Brenda, who usually brings up the rear, silently passed me by, sensing my desire to solitude.

After I stopped to write in my little notebook, I’d fallen far behind our hikers, and I had to hike alone and it was heaven. I was in heaven—both on this inside and the outside.

(Story continues under the captions.) 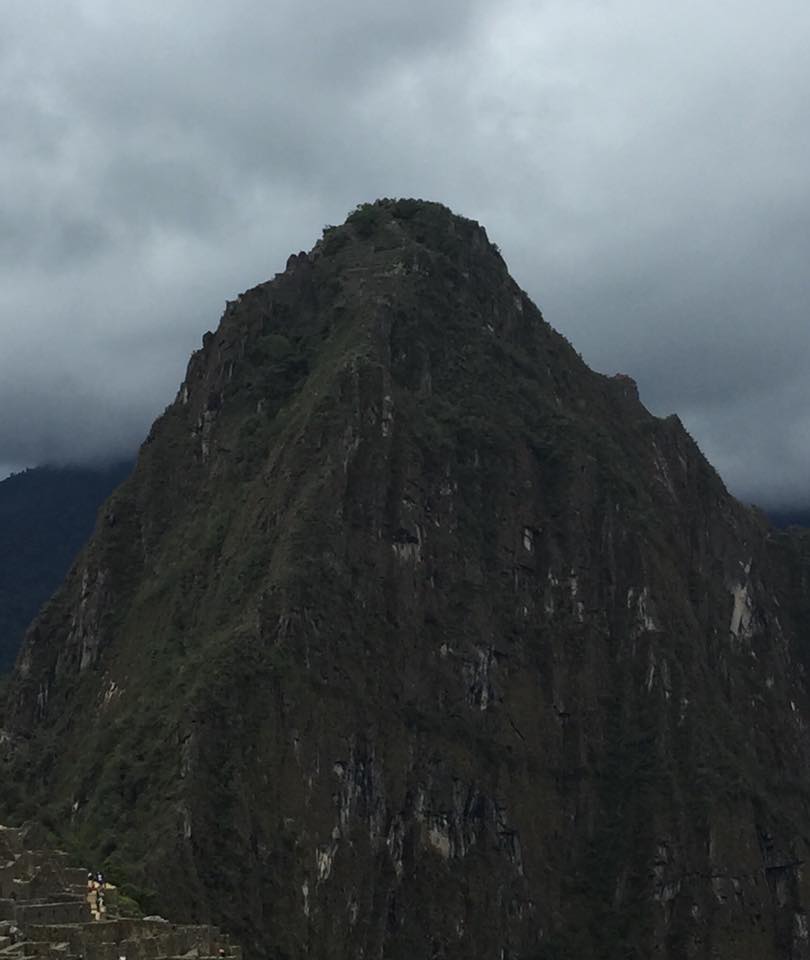 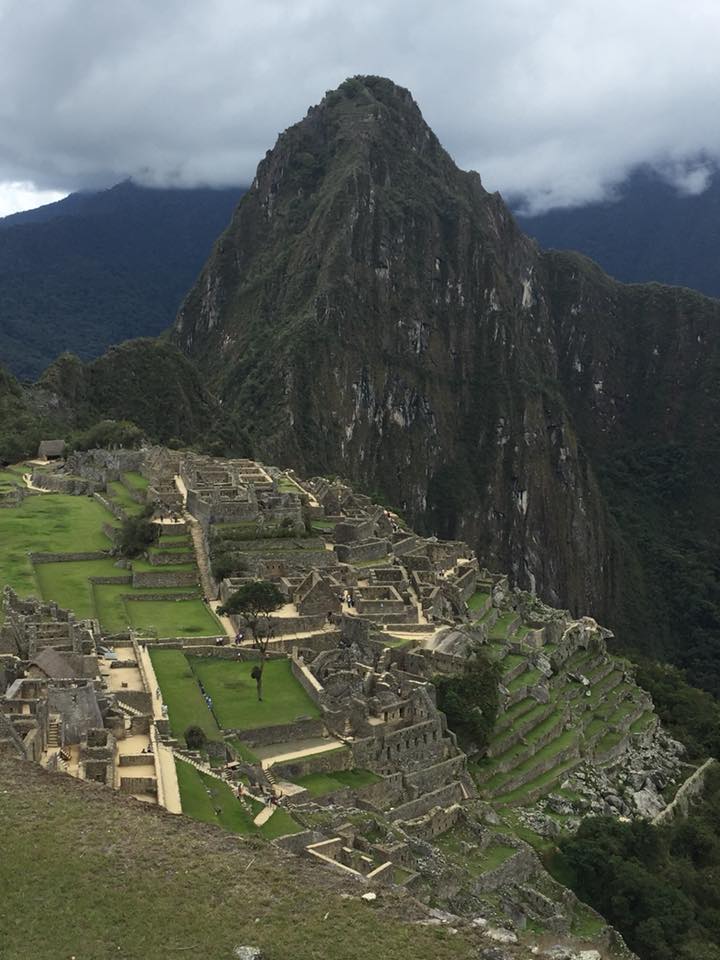 The view from above. 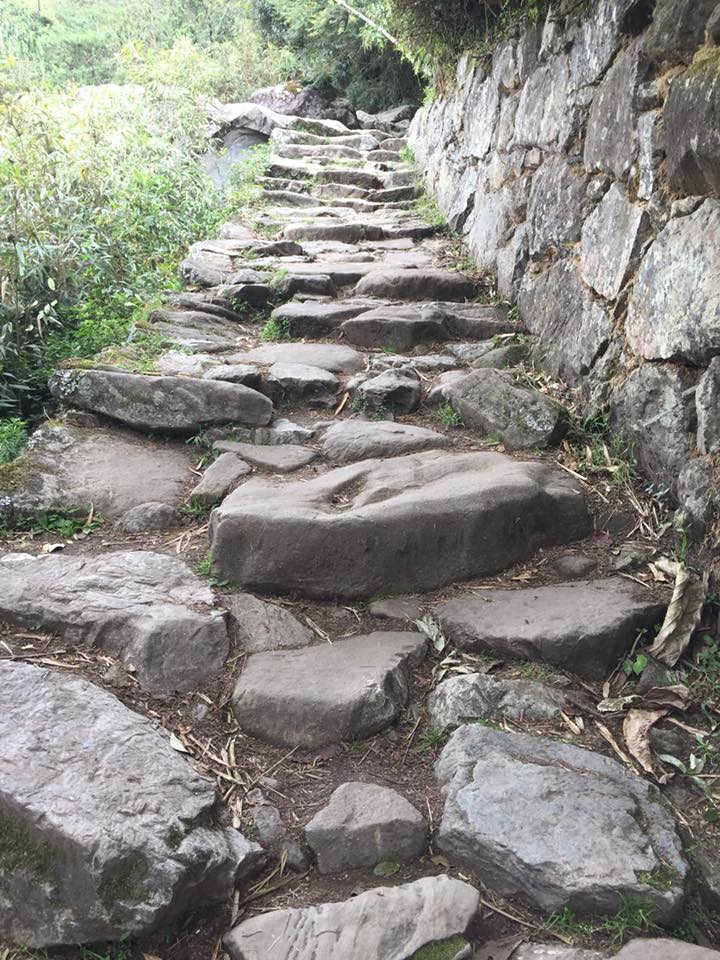 The path up to the Sun Gate. 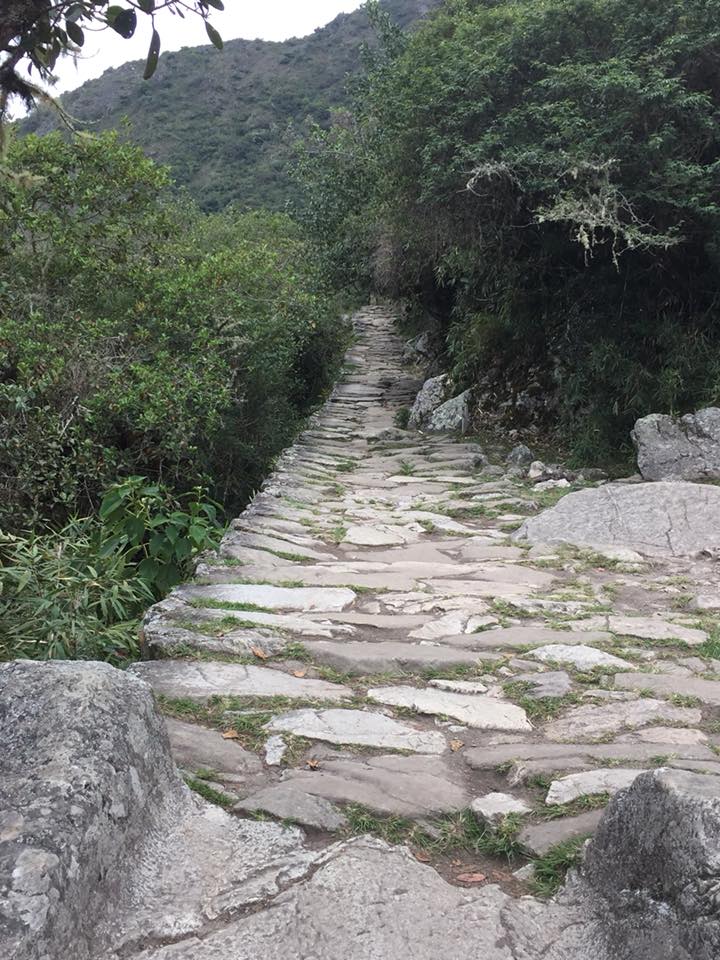 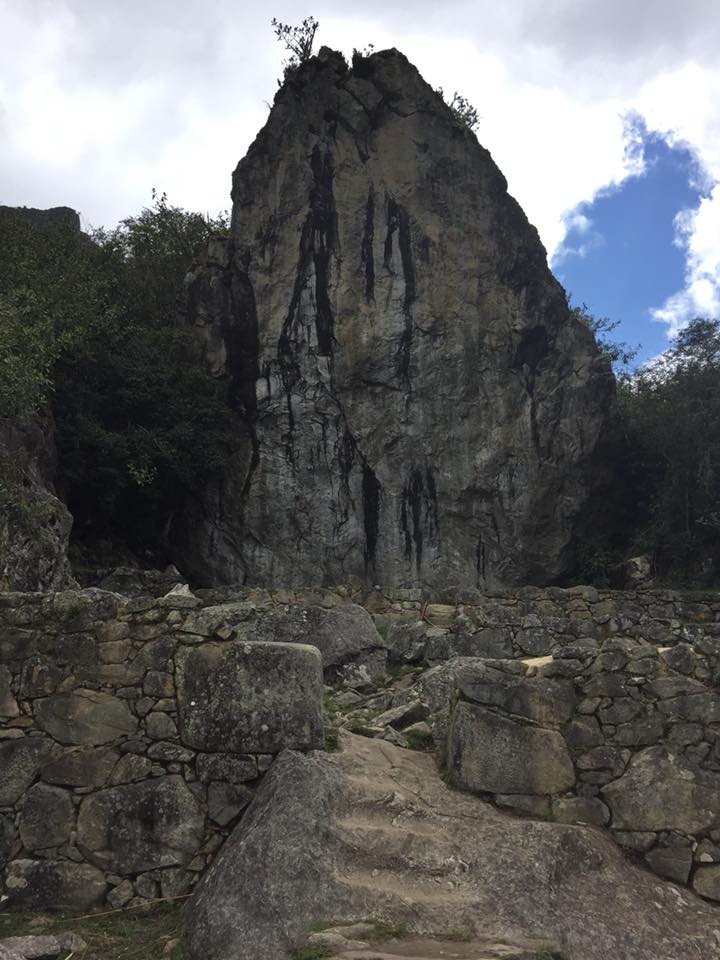 A British woman on the way down stopped to tell me there was a women’s temple up ahead. She said I should look for a huge rock to my right. “The guides don’t talk about it, but my friend told me about it.” Here it is—truly impressive. 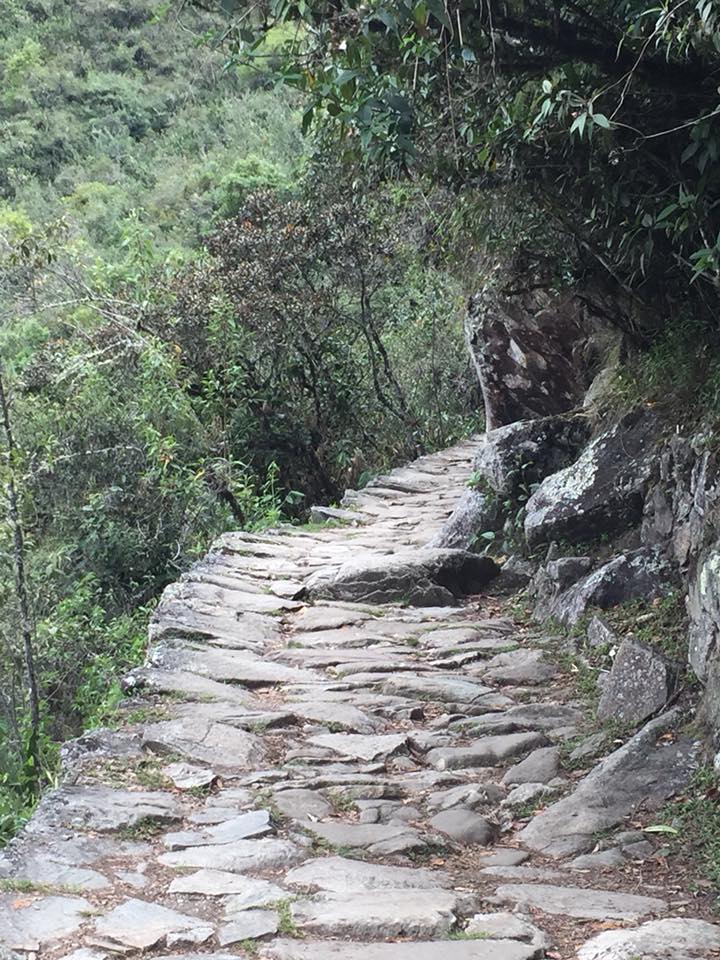 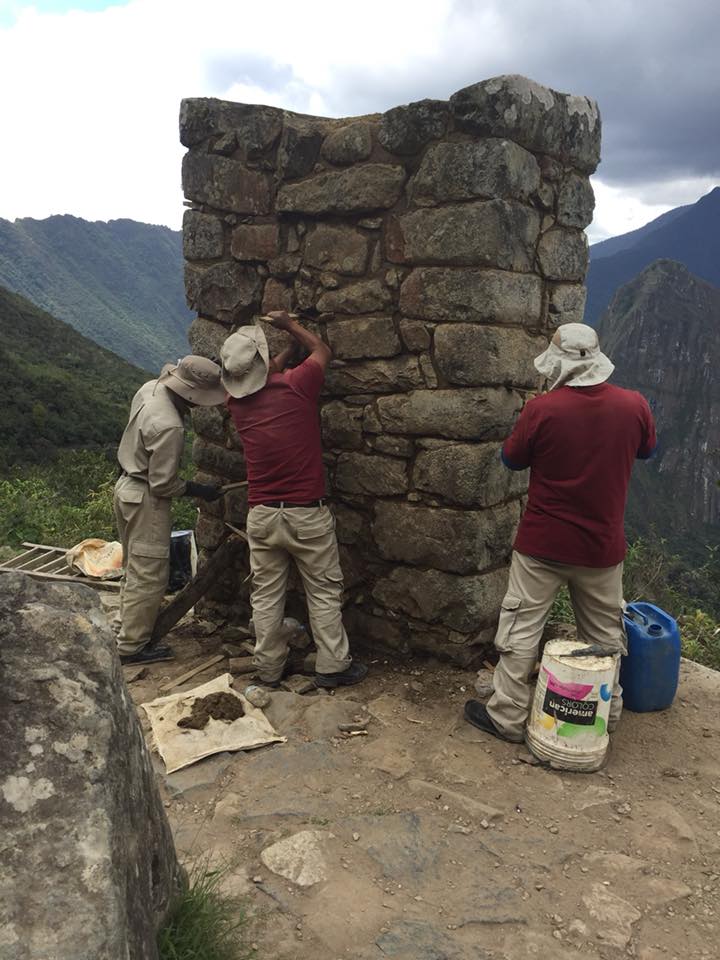 Workers repairing a wall. There was lots of work being done at Machu Picchu today. 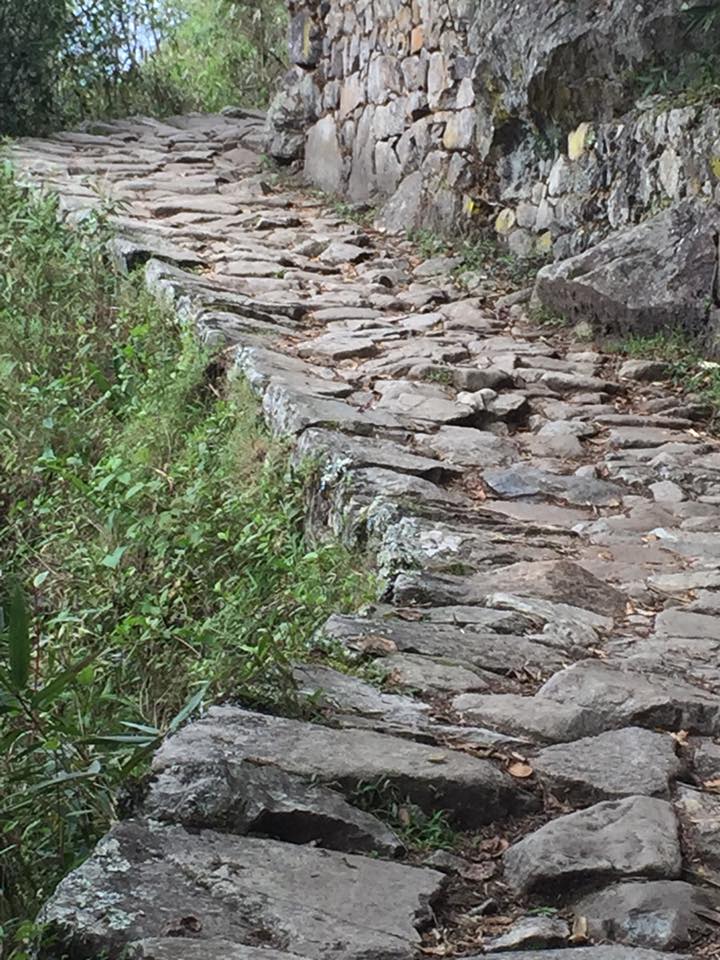 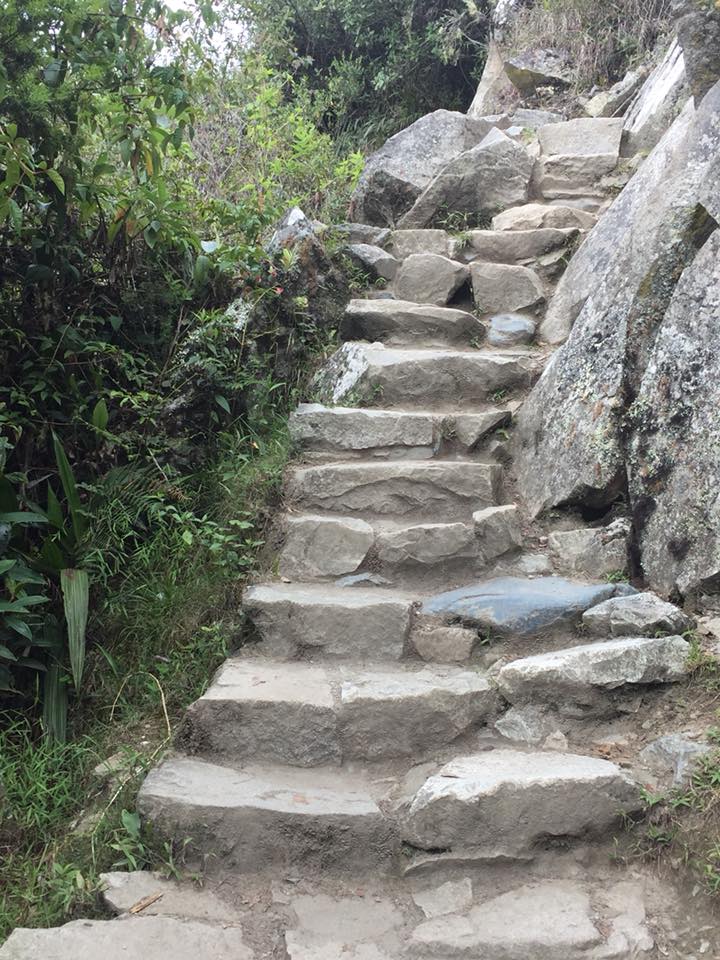 Up, up, up! Especially on the steepest steps, I practiced Brenda’s resting step. 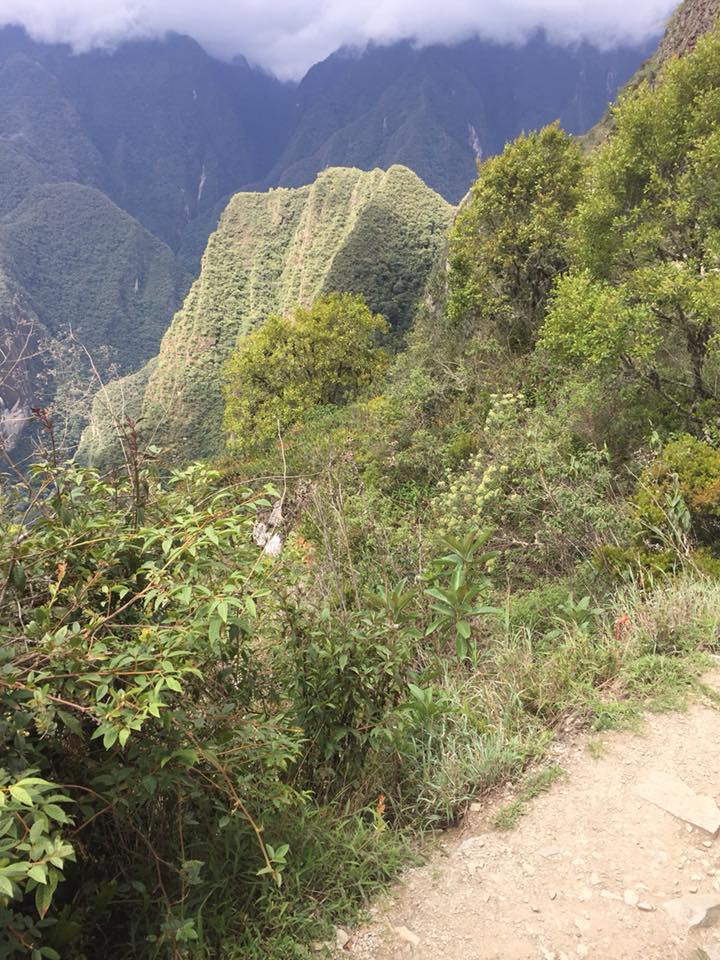 The path ahead and the mountains beyond. 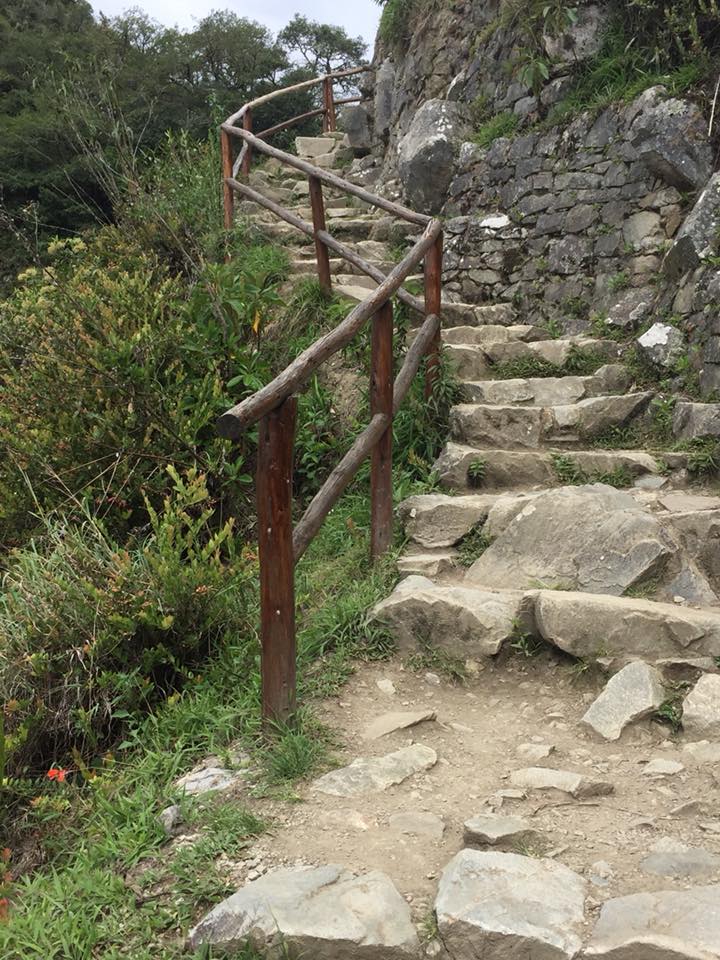 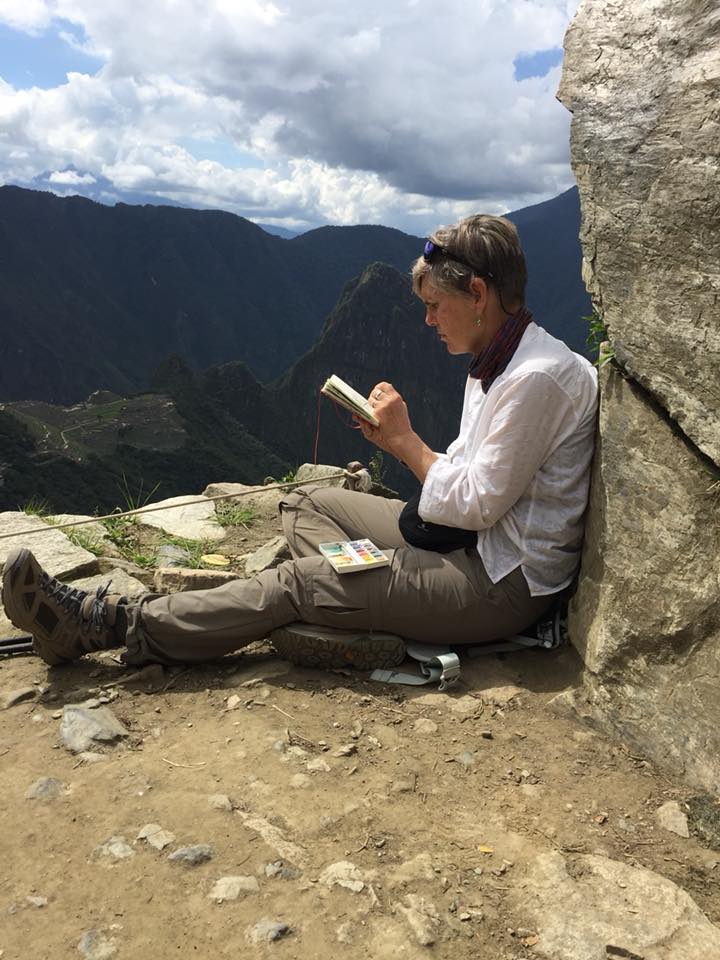 Brenda drawing at the top. 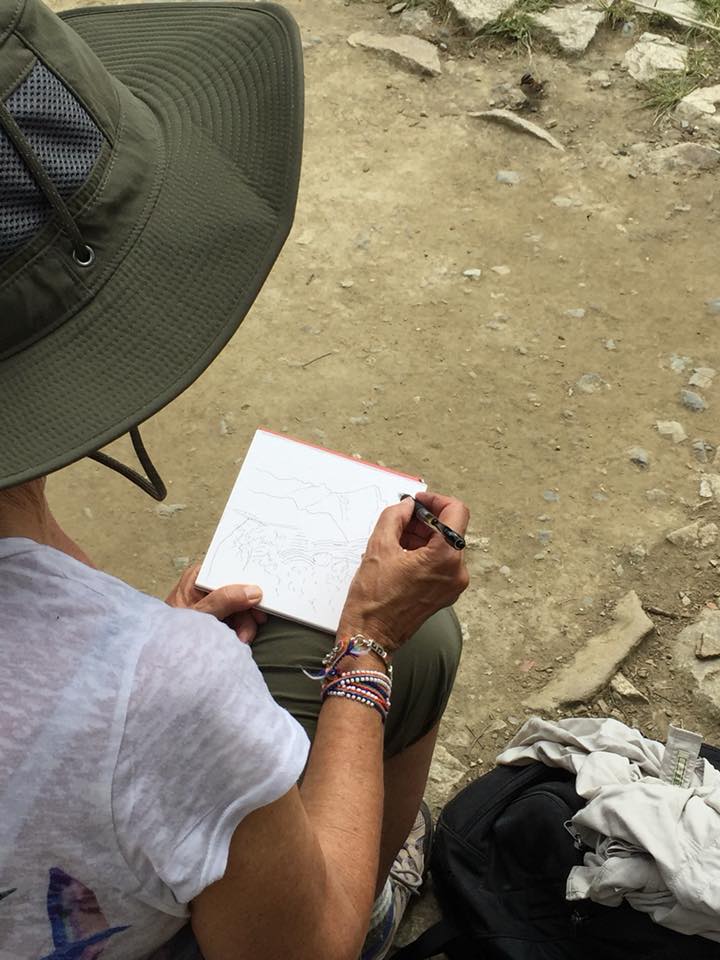 Karyn drawing at the top.

Karyn replied, “I have mine.”

Brenda: “You are a goddess!” 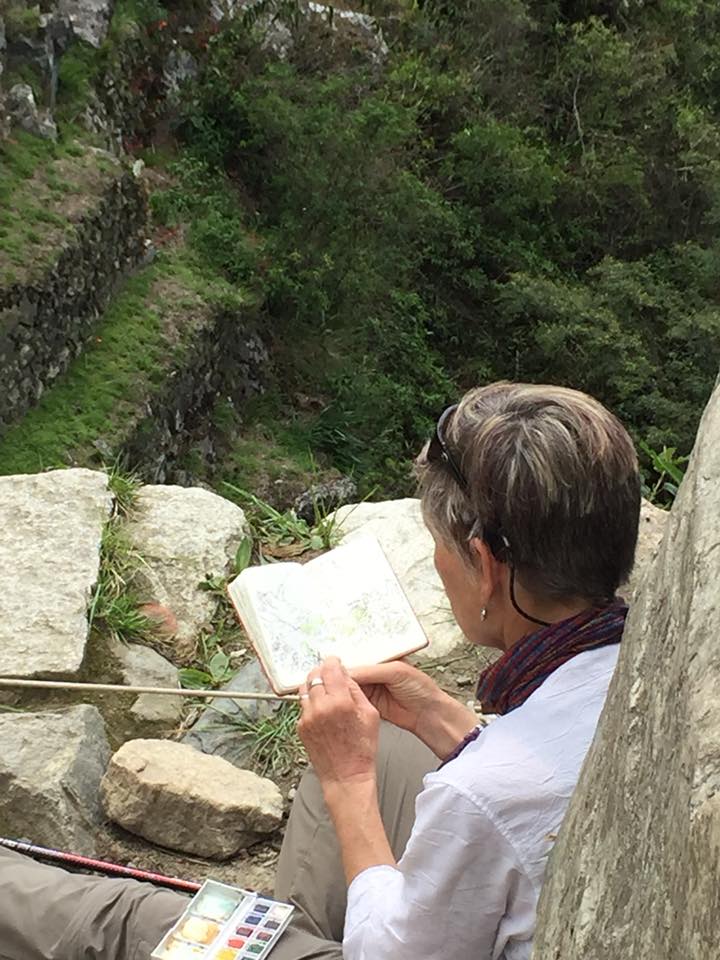 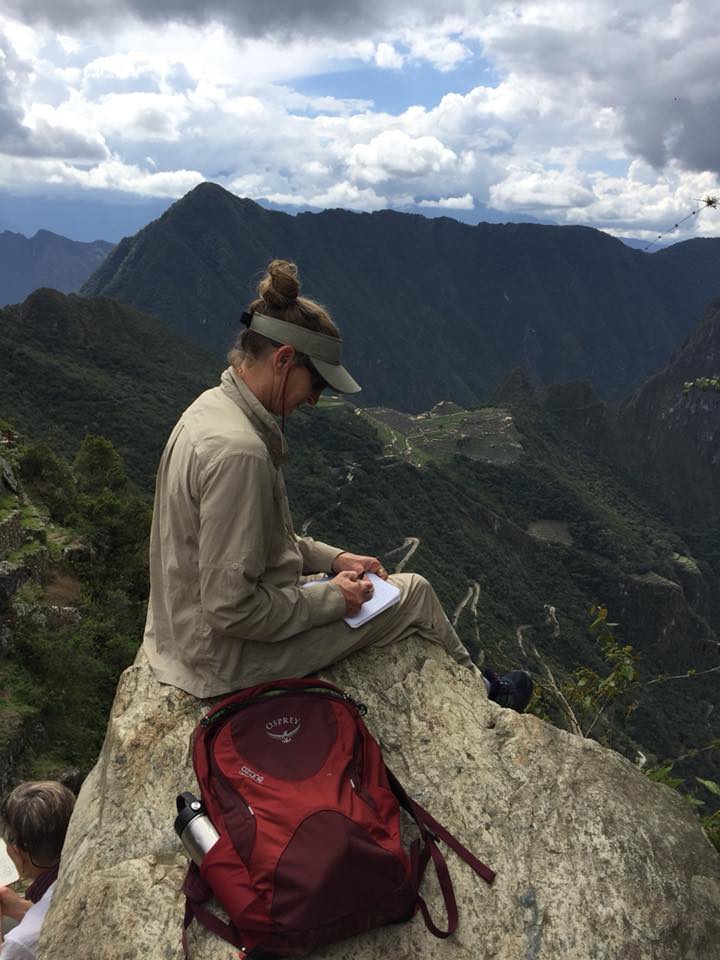 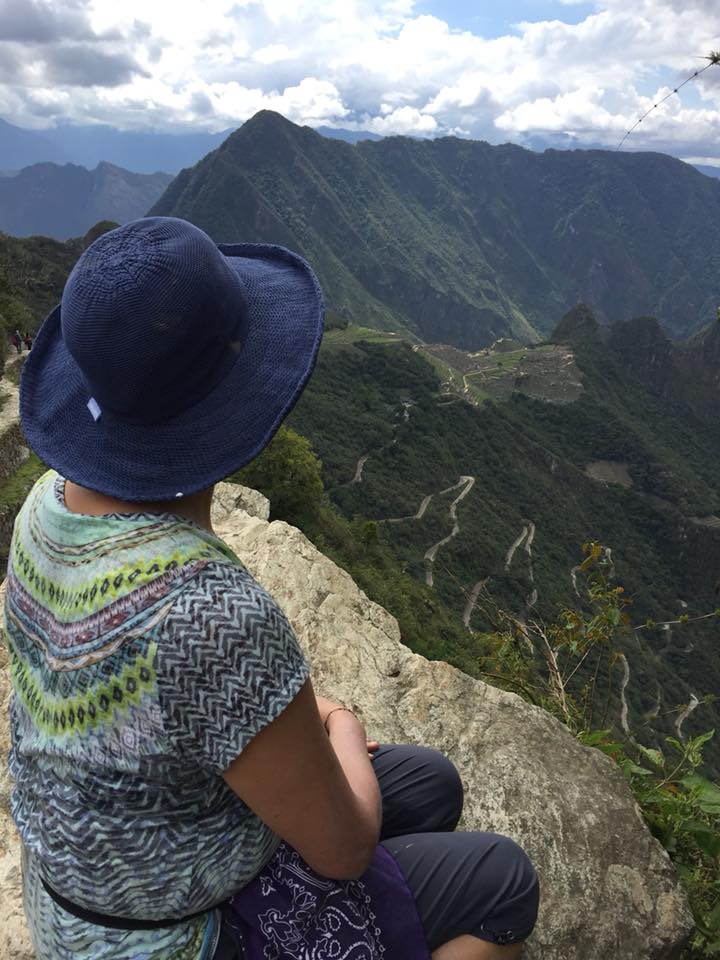 I was covered in sweat but I was happy. My exertion hard earned, my pleasure absolute. This day was turning out far beyond anything I thought it might be. This was sacred land. And I was feeling it. 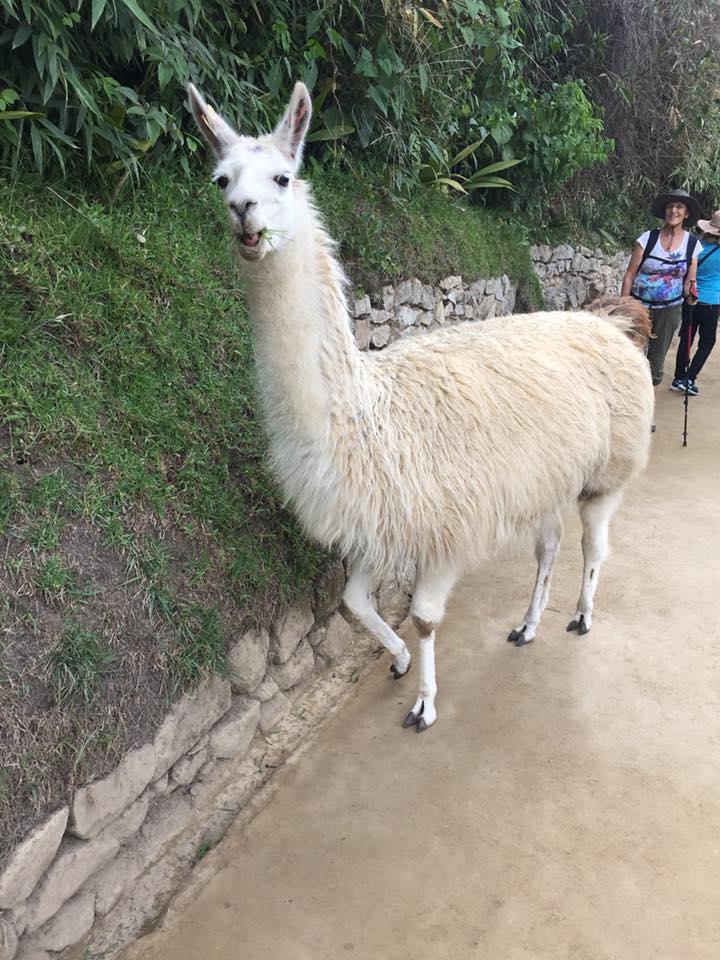 And look who we ran into on the way home. 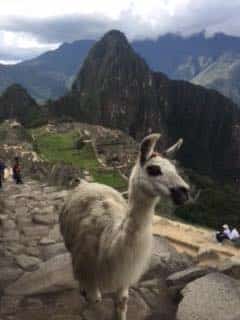 And here’s the llama Juliana ran into on her way home.