Some of you may know, from my previous writing, or from being in class with me, that I had an identical twin sister who died when I was a day old. I’ve grieved Vicki all my life and have always had a deep fascination with twins. Last year at the conference in San Miguel, I met a woman who’s almost as good as a twin—playwright, memoirist and screenwriter Amy Ferris. The interesting thing about Amy is that we have all kinds of bizarre things in common (like we both joined a cult when we were teenagers). But the funniest thing is that we look kind of alike—alike enough that people who don’t know us well constantly mistake us for one another.

So all last year, when we were at the conference together, people kept coming up to her and with great sincerity, thanking her for writing The Courage to Heal. And they’d come up to me and thank me for the great women’s panel that she had run. I’d get thanked for teaching her workshops and she’d get thanked for teaching mine. We’d get together at the end of every day to trade all the complements we’d received that were meant for each other.

This year, Amy, who lives in Dingman’s Ferry, Pennsylvania almost didn’t make it to the conference. She was buried in two feet of snow and couldn’t get a plane to San Miguel for three days. Finally, she was able to get out yesterday and arrived at two this morning.

Tonight, a whole gang of us were hanging around the lobby of the Hotel Real de Minas, where the conference is held, getting ready to go out to dinner. And on our way to grab a couple of taxis to take us to the restaurant, a woman came up to me and told me she had just started reading my book and how much she loved it. Only she was talking about Amy’s book, Marrying George Clooney. When I told her she was thanking the wrong person and pointed out Amy, who was about ten feet in front of me, the woman apologized and then said, “But thanks for that great panel today!” Amy’s panel, of course.

Ten of us crammed around a table at a great restaurant, Sirena Gorda, recommended by my host, Susan. It’s a local hangout and Susan guaranteed they had the best fish tacos and artichokes in town. We drank margaritas tamarindo, ate the illustrious fish tacos, snacked on artichokes with a great hot dipping sauce, and had a lot of other fantastic cheap food—including the best chile rellenos I’ve ever tasted. The conversation was intimate, funny, and at times lively. I asked Troy to take a couple of pictures of Amy and I so you can see that at a quick glance, we really do look rather similar, especially the short hair and glasses: 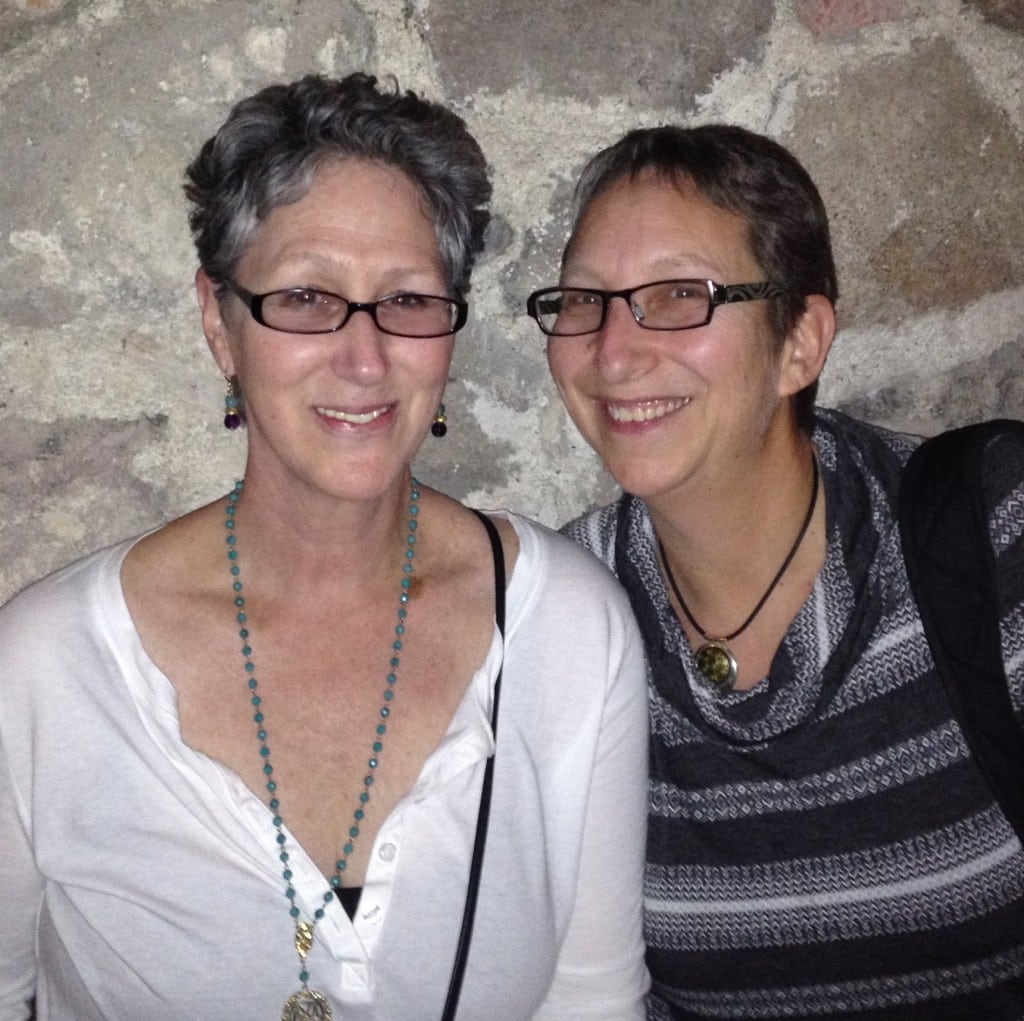 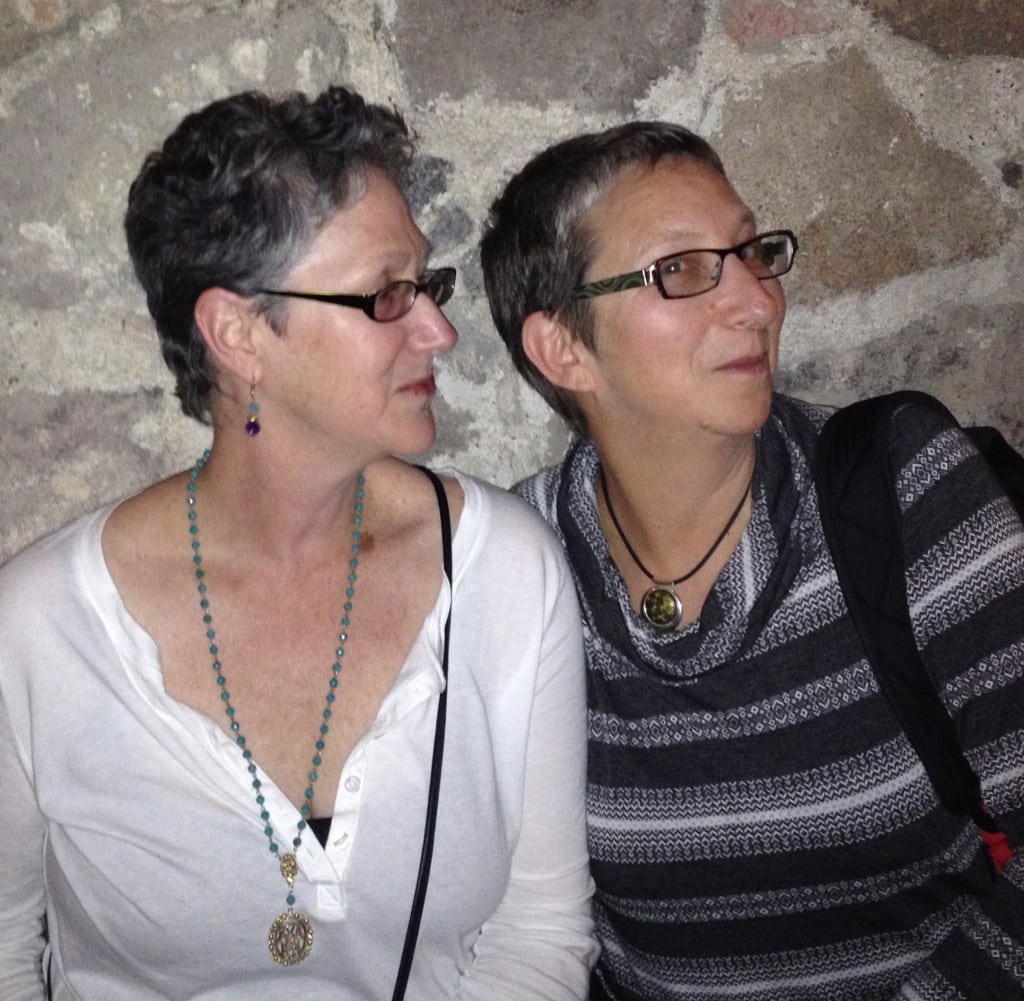 Afterwards, two people grabbed a cab back to the hotel, and the rest of us wandered the streets until we came to a stunning rooftop bar, the Nena Hotel Boutique. It had a view of the entire city and the parroquia. 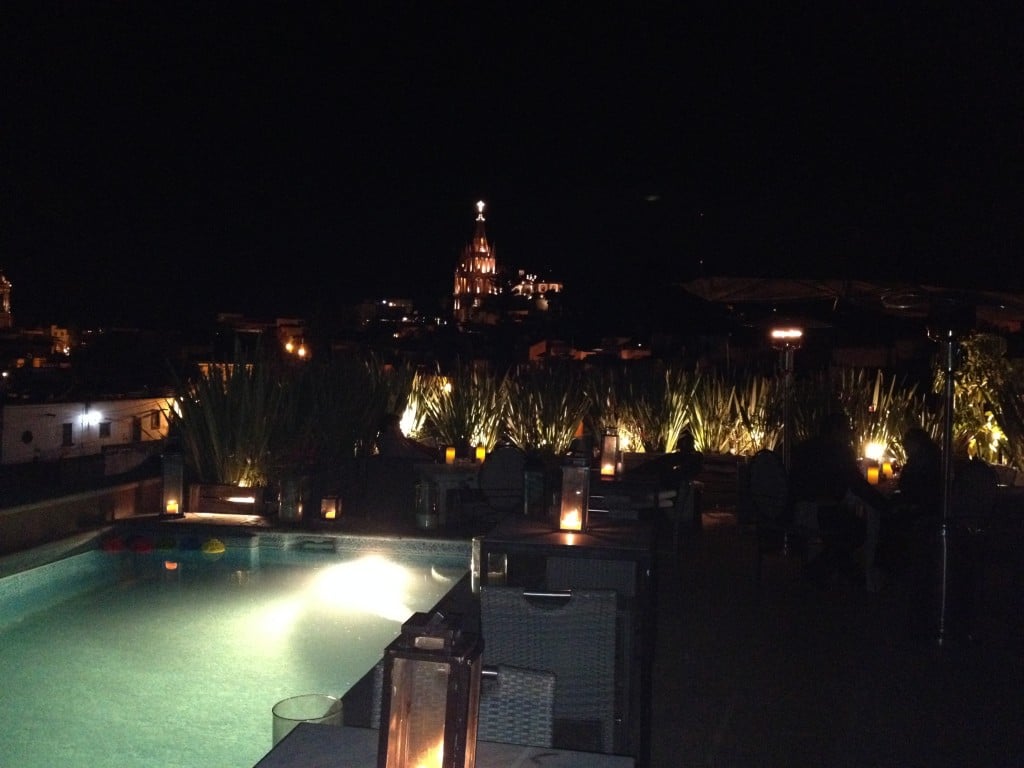 The moon almost full. There was a long rectangular pool with flowers floating in it and a wide expanse of sky and city lights in every direction. The eight of us sat back in comfortable couches, around a outdoor table. We ordered another round of drinks, and started talking again. But soon, ten mariachis, playing extremely loud music, with tons of brass, headed our way. We thought they were coming to our table, but instead they surrounded the table next to us—a very handsome man and his date—and serenaded them. Except the music was so loud, it could hardly be called serenading. It was twice as loud as any mariachi band I’d ever heard before. As one of our party remarked, “It sounds like they’re playing two different songs at a time.”

It didn’t take long for us to realize that the man had just proposed to the woman and that he had just given her the ring. He held her hands, then he tilted his head back and started singing along with the mariachis. There was really nothing for us to do but watch the spectacle. A photographer was taking pictures of the happy couple, and every time he did, the man would covered in a grid of red flashing dots, making him look like something out of a science fiction movie.

The music went on and on. We laughed and smiled and watched. The whole thing was surreal. Amy, who was sitting next to me, leaned over and said, “I feel like we’re in a movie, but we can’t move, because we’re the extras.”

Finally, the music ended, and the couple kissed. On our way out, Amy and Robin went over to congratulate the couple and they hugged. The woman said, “You’re the first person to congratulate me,” and the man said he’d been planning this night for two months.

I’m afraid I was a bit of the party pooper. It was a magical night and I think some of the others would have been happy drinking up on the roof for quite a while longer. But it was close to 11 and I’m teaching two workshops tomorrow morning: “How to Write About What You Can’t Remember” at nine, and then moderating a panel on The Art of Collaboration at 11. Ellen and I are going to talk about our collaboration on The Courage to Heal, Amy and her writing partner, Hollye Dexter are going to talk about their work together on The Shame Prom, and local ghostwriter Lulu Torbet is going to talk about the ins and outs of ghostwriting. So, following me lead, we all left. The others walked back to the hotel and I hopped in a taxi for 40 pesos, and minutes later was dropped off at my beautiful casita, my home away from home.

No wonder I like coming back to teach at this conference year after year.