Today was a very, very, very long travel day. It was the day I said goodbye to Australia: 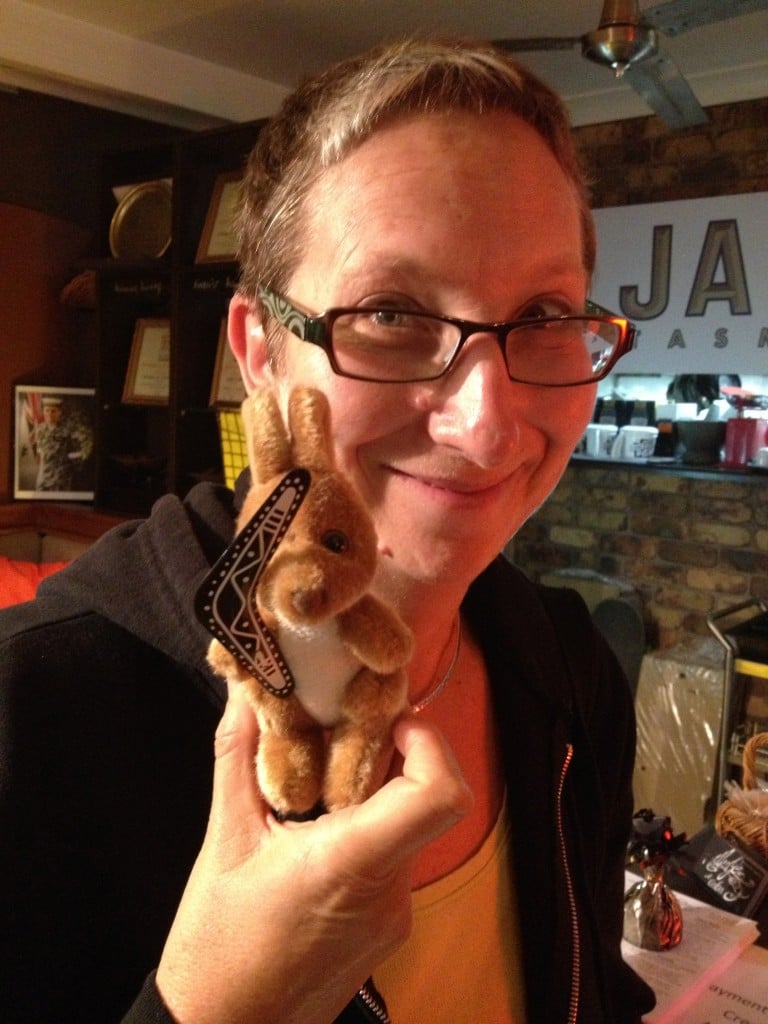 We left the house at 5:45 AM. It took us two hours to drive to the Brisbane airport. We waited an hour to board, then an hour on the tarmac. The flight was 6.5 hours. We sat in two hours of traffic leaving the airport in Denpasur, and then had a five hour drive to our hotel.

We are staying in the upper west corner of Bali, about as far from the airport as you can possibly get. But we have landed in paradise! I just took a fantastic outdoor shower and am clean and in my jammies in my huge king size tropical bed…but more on that later.

I want to tell you a little about our arrival in Bali. After we cleared customs and paid $25 for our instant visa and walked past all the signs that say if you are caught with ANY drugs in Bali, you will be put to death (and believe me, they’re not kidding), we walked out into the humid (but pleasant) air of the late afternoon and our Balinese driver was holding up a sign with our names. He took our luggage cart and packed our bags into a very comfortable air conditioned van and we took off.

Aside from the fact that we were stuck in horrendous traffic for almost two hours, traffic that is a constant in southern Bali around the airport, I was much more aware, not of the diesel fumes or the insane dance of cars and scooters on the road, or the constant honking, but at the wonderful familiarity of this country that I fell so much in love with last year.

A year ago, when Lizzy and I arrived a week before Karyn and the rest of our group, I remember just gaping at the incredible cacophony of sounds, bizarre sights, sensory stimulation that was completely new and unfamiliar. My mind was blown a hundred times on that first drive from the airport to the Lotus Bungalows, our hotel on the eastern coast of Bali. I couldn’t absorb even half of what I was seeing.

But today, I reveled in how familiar it all was: all the warings, small shops by the side of the road with their fruit and food and live chickens and roosters and liter bottles full of gasoline stacked on shelves for motor bikes. Hundreds of scooters were weaving in and out traffic. A napping child wedged between his parents on the back of one scooter; an upside down silver stepladder was strapped to the back of another. A whole little steamed bun shop was attached to the back of another scooter rider. The cars and scooters were weaving across the road in an endless dance with no regard at all for the lines painted down the center. Last year, that unnerved me. This year, I enjoyed the dance. 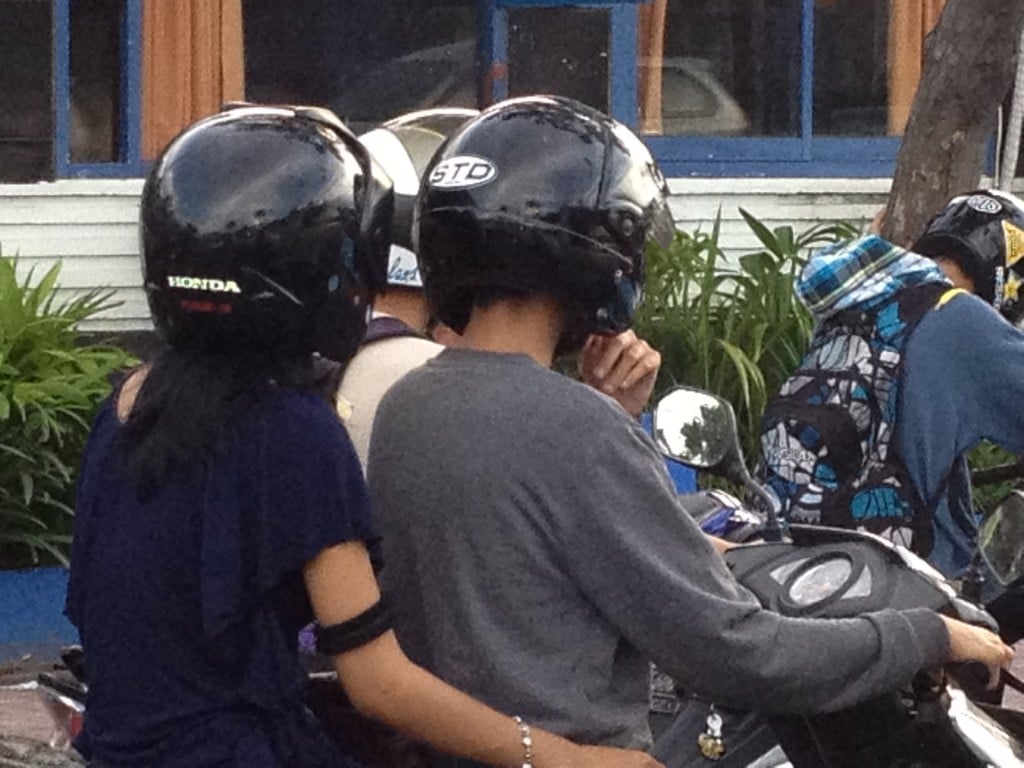 Allison and I ticked off all the familiar things we saw outside our windows: temple scarves wrapped around statues at intersections, double-walled temples by the side of the road, rice paddies in all stages of their evolution: flooded, burned and verdant green. Black and white checkered cloth on street corners and at intersections. Mangy street dogs who all looked as if they were starving.

Allison laughed out loud as she read me a sign advertising a blood drive:

“Welcome to all bloody participants. Thank you for participating.”

I’d never driven this route before; I was surprised to see the occasional traffic light. And the traffic and congestion and honking whenever anyone passed another vehicle—which was all the time—went on and on and on. It was almost two hours before we moved into a quieter countryside, the Bali I remembered most. We opened our windows as the exhaust diminished and took in the smells and the warmth of the tropical air. As we climbed into the mountains, we closed our windows and I put my sweatshirt on.

Our driver didn’t speak more than a little English and we spoke only a few phrases in Indonesian, so our communication was rudimentary, but after a few hours on the road (and it was dark by now—it gets dark in this country every day, all year, by 6:30 because Bali is so close to the equator), we made it clear we were hungry and he took us to a restaurant. We invited him to eat with us—he declined. Allison and I were the only customers.

The first few pages of the menu featured western foods; we skipped right over them and went to the page with Indonesian foods. We ended up ordering Mie Goreng, a basic noodle dish that is a staple of the Balinese diet, and it wasn’t even on the menu. Our waitress asked us what we wanted to drink. I chose a papaya juice and Allison ordered apple-mint.

Then we watched as the woman went behind a counter to make our juices. I watched her put some ice in a blender, some fresh papaya and a little water. Then she poured the resulting frothy mixture into a tall glass. It looked so refreshing. Then I watched her make Allison’s: apple juice, ice and fresh mint.

Before she brought our drinks to the table, we discussed whether or not we should drink them. I didn’t know where the water came from and the ice was probably not from purified water. It looked like a decent restaurant, but getting Bali belly from the water was something to consider seriously. Allison told me how sick she’d gotten once in Mexico from ice melting in a drink.

I weighed my options and looked at the lovely waiting papaya-colored drink in front of me—I realized if this drink had been made in the kitchen, I never would have known it had water and ice in it. And on an impulse, I picked it up and drank it. It was my risk for the day. Maybe it was the stupidest thing I could possibly have done, but it tasted wonderful. 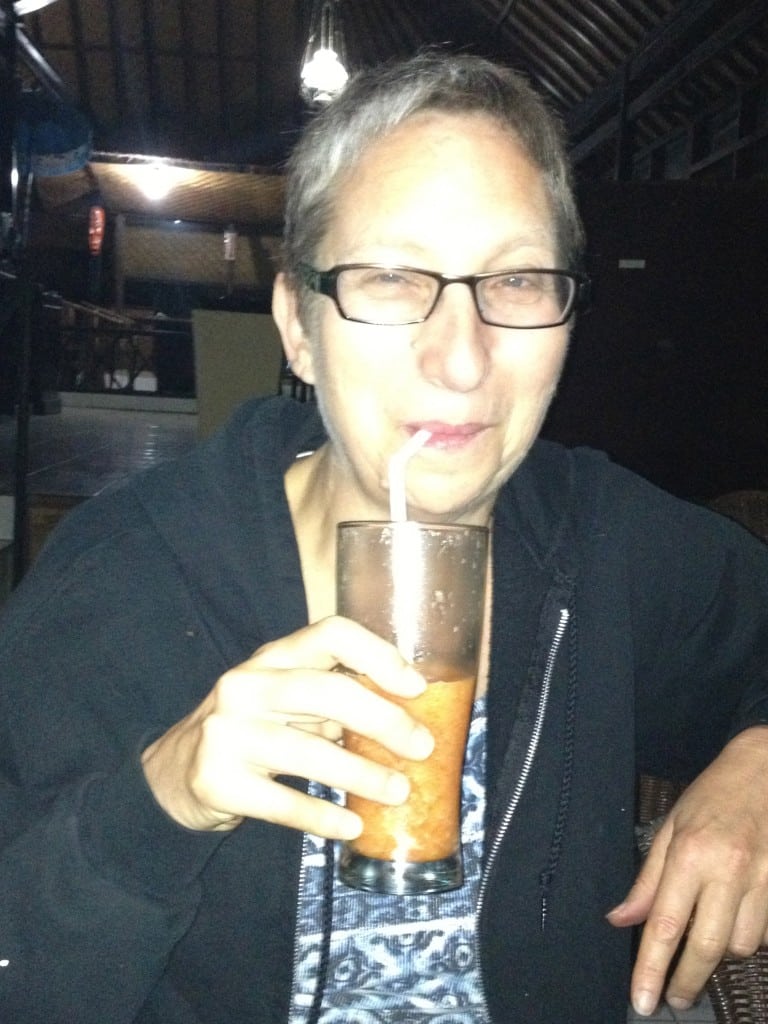 I reached in my purse and pulled out the small glass vial I had of colloidal silver, which is purported to help with hints of illness before they develop—but which can only be used in small doses or it can turn you permanently blue (I kid you not). I only use it traveling, like when the person next to me is coughing on an airplane, and this seemed like a good moment to spray a little into my mouth. 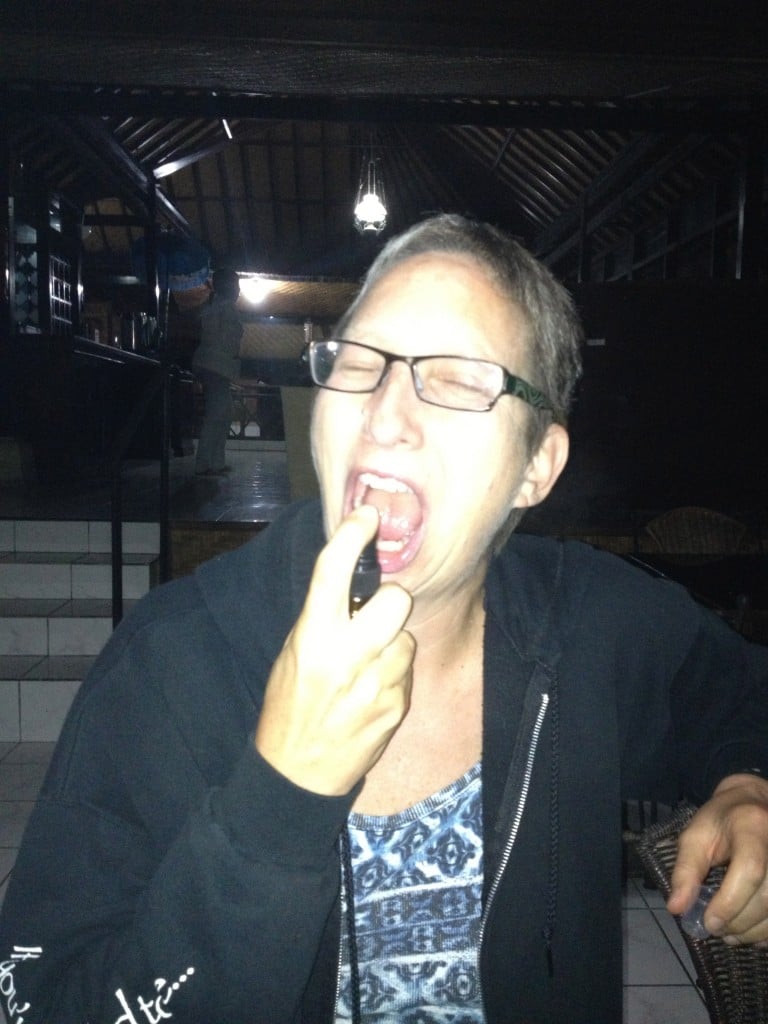 Allison did not drink her apple juice and ordered a beer instead. 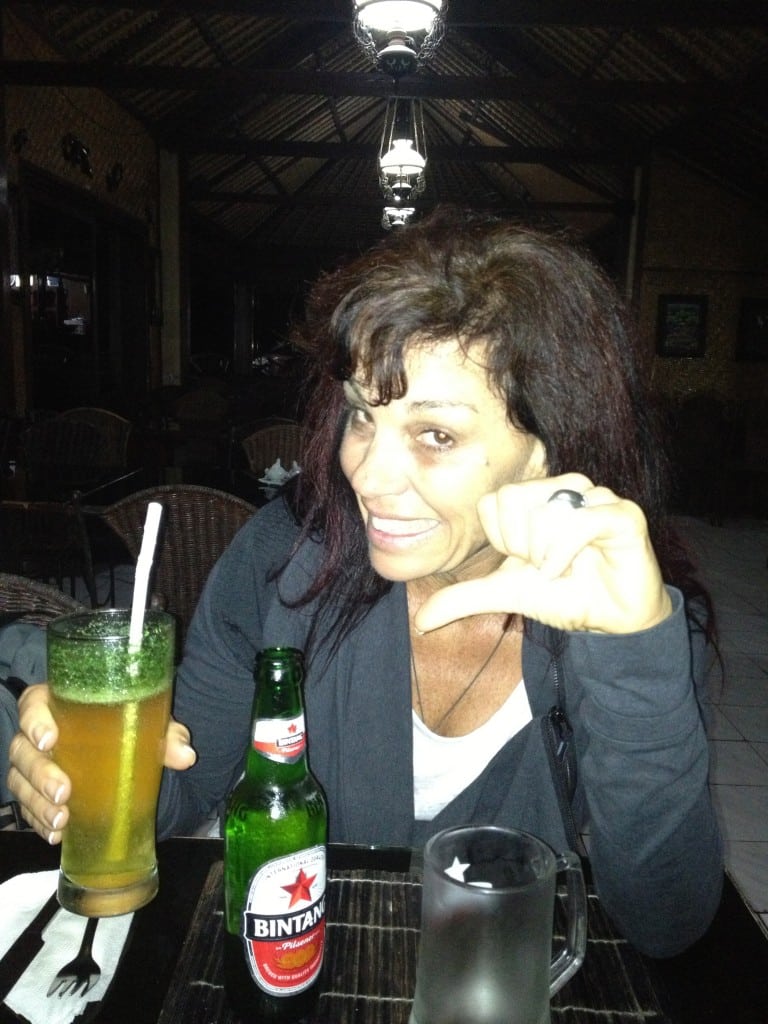 Whether I was being completely foolish or merely drinking a great papaya drink remains to be seen. If you don’t get any posts from me for a couple of days, you’ll know why.

In any case, the mie goreng was just as delicious as I remembered it. And dinner for the two of us, including the three drinks? Fifteen dollars, and that included a bit of a tip.

After dinner, it took two more hours to reach our hotel. During that time, we had to swerve around a huge pile of dirt in the road with a cross on top of it. We debated whether it was a grave—or the marker for someone who died in a collision, but the Balinese cremate their dead. And the huge pile of dirt seemed more likely to cause a fatality than prevent one. So that remains a mystery.

We passed a wedding in progress, a temple ceremony, and a mosque. And only a couple of kilometers from our hotel, there was a giant Ferris wheel by the side of the road—part of a Japanese circus. It looked like a small county fair. I think we’ll definitely have to go check that out while we’re here. 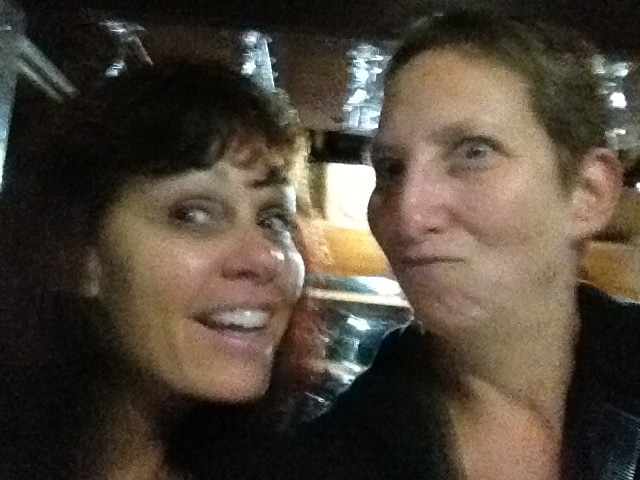 It was a very long travel day, but we’re relieved to be here. We’re in Bali!

P.S. I want to tell you about this incredibly elegant suite we’re staying in, but I’m running out of steam. It’s been a very long day—I’ll take pictures tomorrow in the daylight and post them for you.