This morning, I had one hour before I had to be back in the lobby of my hotel to get in the vans to head to Munduk, up north in the mountain country, the final stop of our three-part tour of Bali. I set out, walking fast and determined, knowing exactly where I wanted to go. I’d heard about an exhibit at the Agung Rai Museum of Art, just five minutes down the street from our hotel. “Irony in Paradise” is a temporary exhibit by 65 contemporary Balinese artists about the invasion of outside corporations, the impact of first-world development, and the impact modernization and tourism are having on the ancient culture of the Balinese.

Vanya read a piece in class yesterday about her visit to this exhibition, and I knew I had to go see it myself before I left Ubud. 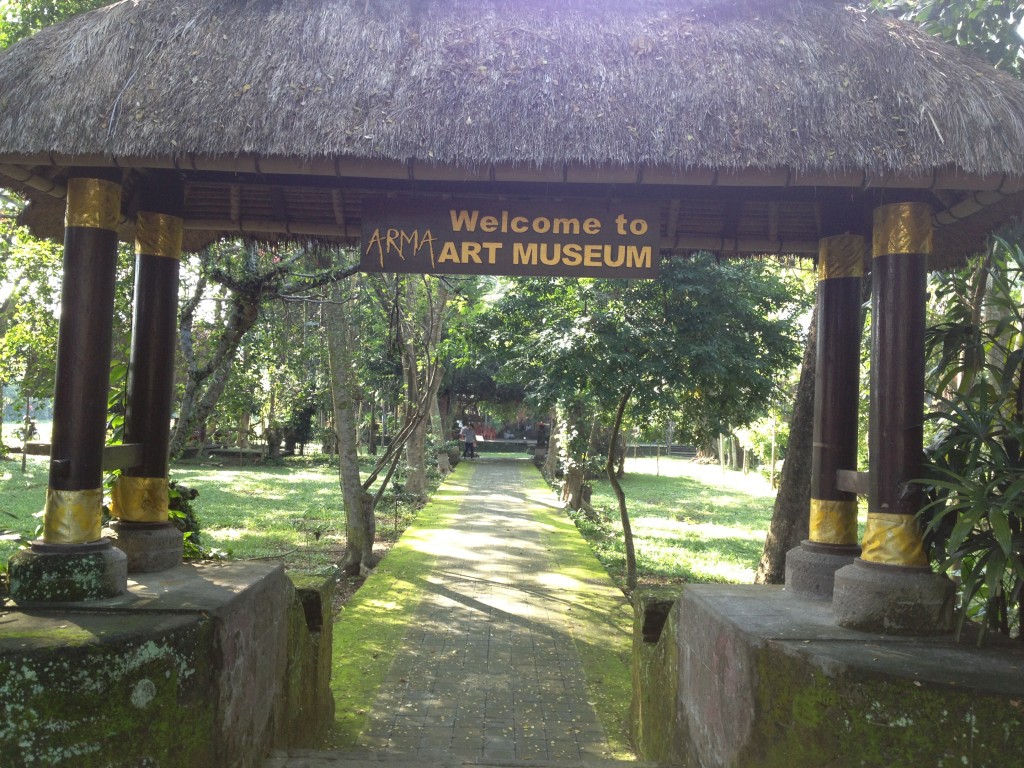 I arrived at the museum at 9:30, right when it opened, and I was the parga (first) visitor of the day. I paid my 50,000 rupiah ($5.00) and was handed a guidebook to the museum. The text inside was fairly typical of translated descriptions of Bali designed for tourists. Here are some excerpts:

“For Agung Rai (the owner and founder of the museum), Bali is a romance and its people and their rivers and rice fields are a never ending poem about light, beauty, art and spiritualism…”

“Agung Rai’s world is one of incomparable beauty in which villagers and even their cows, chickens, pigs and dogs, harmonize perfectly in an endless symphony of sights and sounds.

“In Bali, the natural environment is so beautiful that it resembles art and the created art of the Balinese is an offering to say thanks to the gods who made it all possible.

As I entered the museum grounds, I entered a world that reflected the kind of serene beauty I’d grown used to seeing in Bali. The place was stunning and I was immediately sorry I didn’t have a few leisurely hours to spend there: 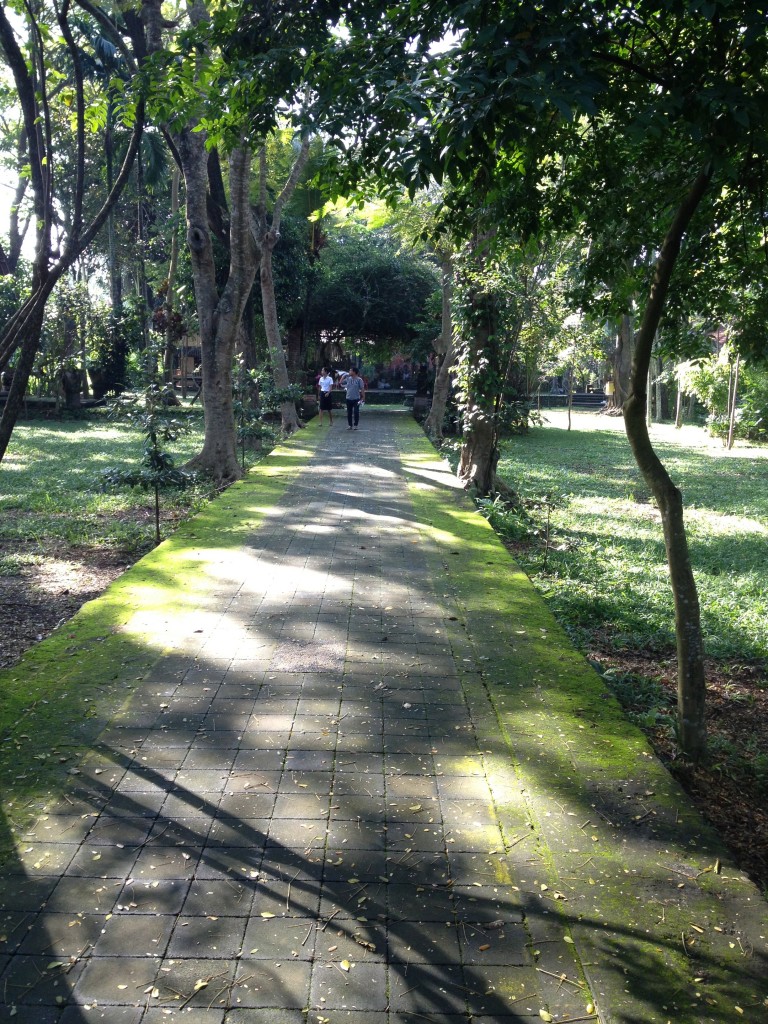 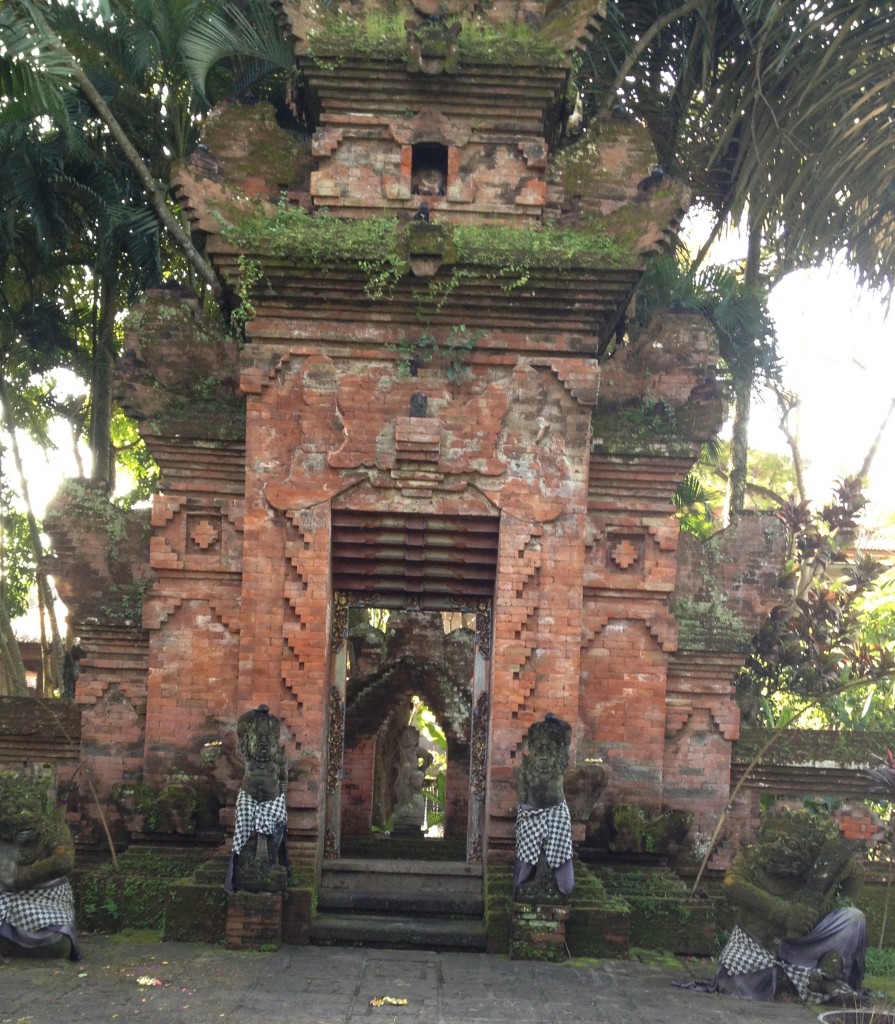 All was in harmony; everything designed to create serenity and beauty: 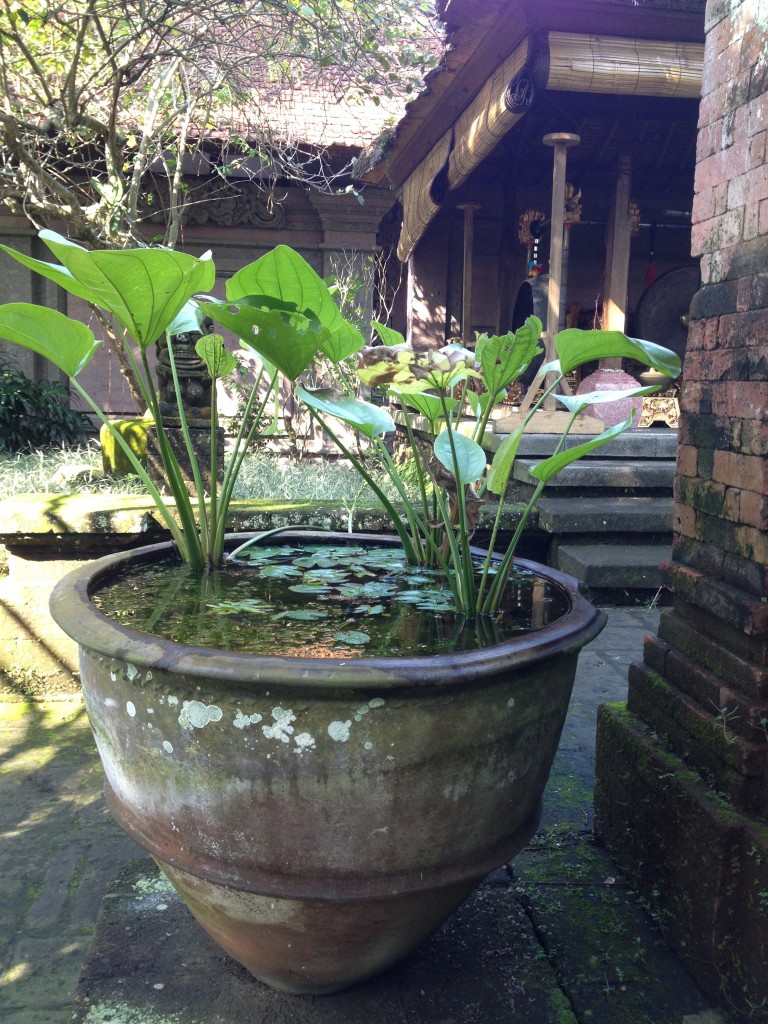 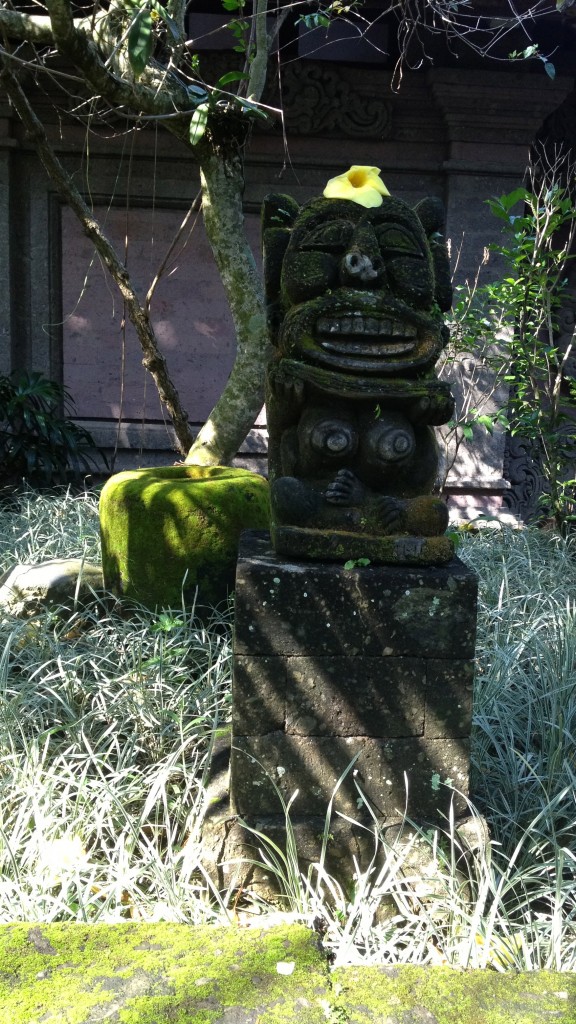 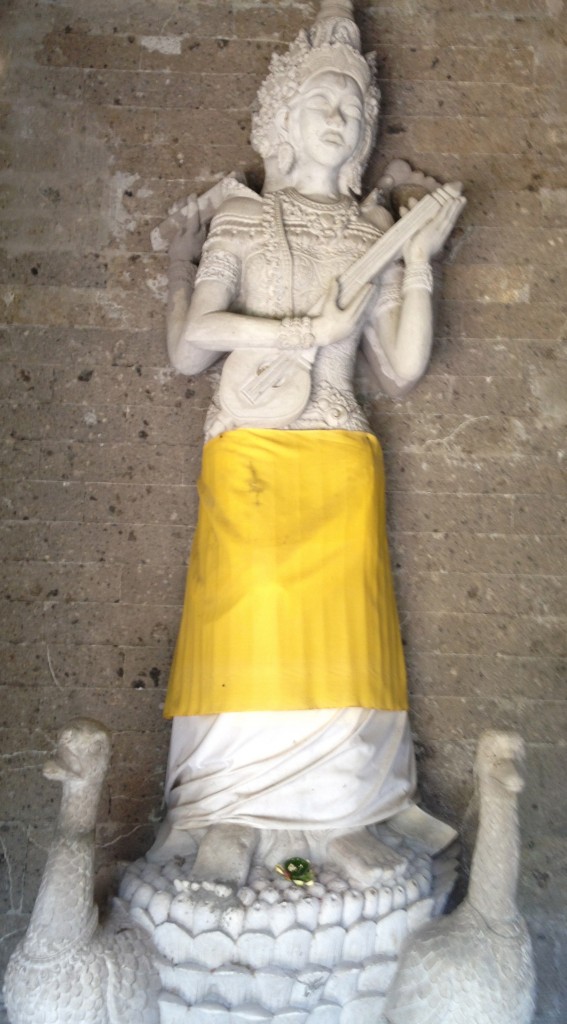 The moment I walked into the “Irony in Paradise” exhibit, however, the lens shifted. In Bali, a country where artist is the second most common occupation, next to farmer, people had a lot to say about the impact modernization is having on their lives, their families, their culture, and the land itself. There was nothing about this exhibit that felt peaceful, soothing or harmonious.

Although many of the sculptures, paintings and 3-D art had Indonesian names I couldn’t read, and all had references and subtexts I couldn’t possibly understand, I was immediately silenced by the power of what I saw. I wished I had a guide who could explain the nuances of what I was seeing, who could translate the words, yes, but also the anger, the grief, the rage, and the pain expressed by these artists.

This was the first piece that grabbed my attention was entitled Illegal Logging: 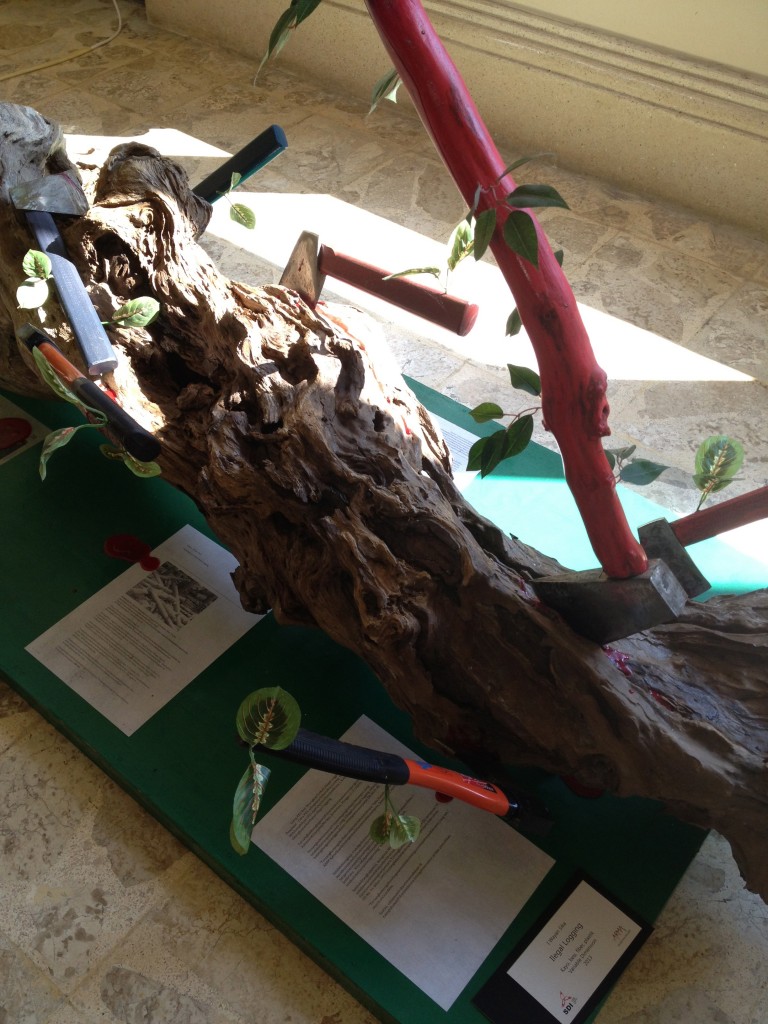 This picture, which shows the gradual destruction of a rice field, was called Panen, or harvest: 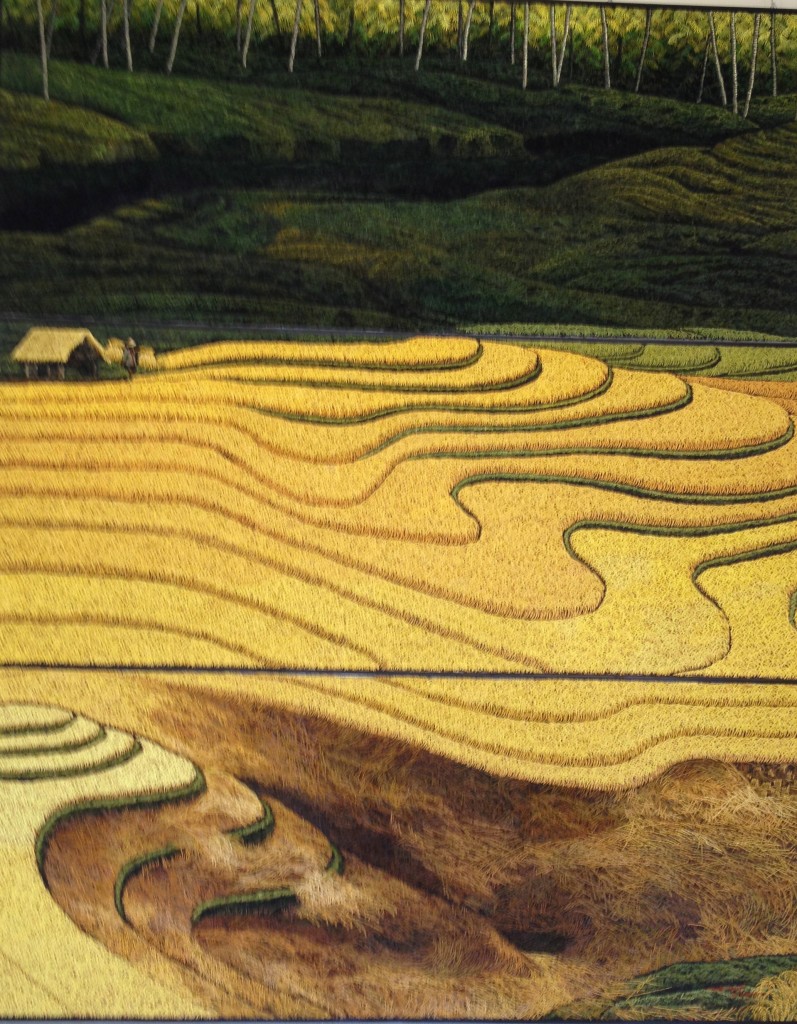 This wooden head, entitled Roh Pohon, Spirit of the Tree, was marred by violence: 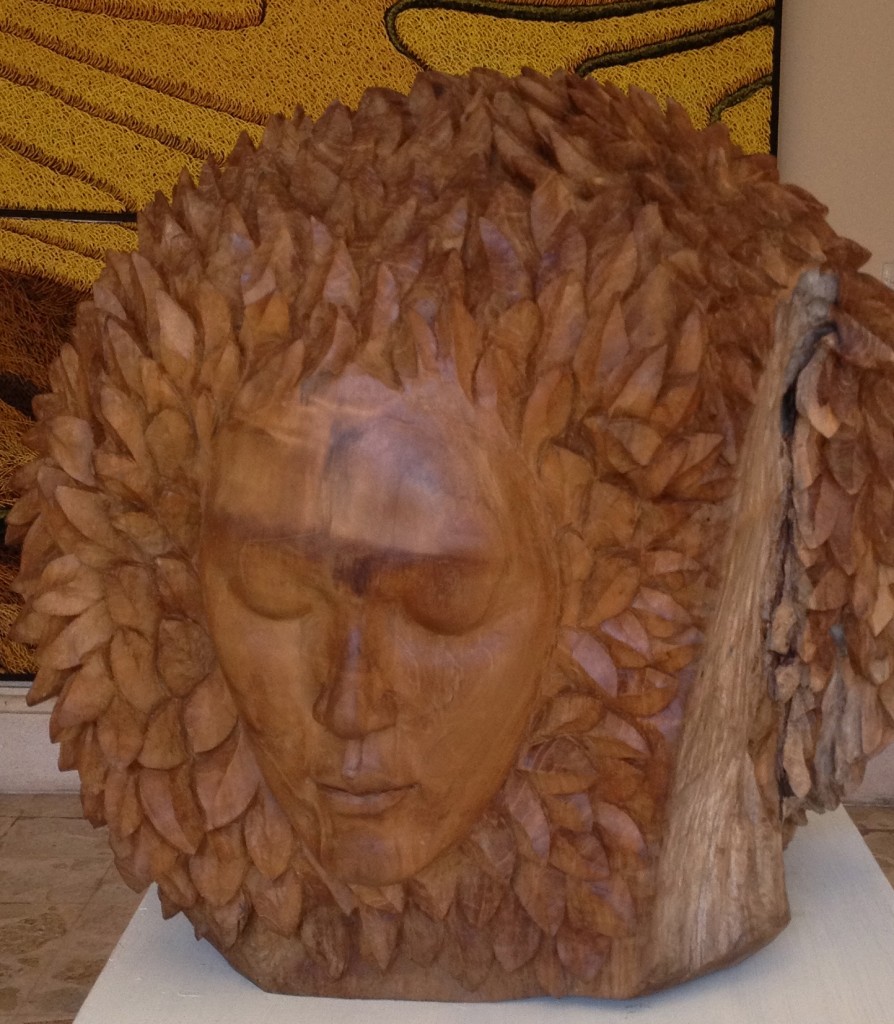 This spirit was called, How Brutuk Are You: 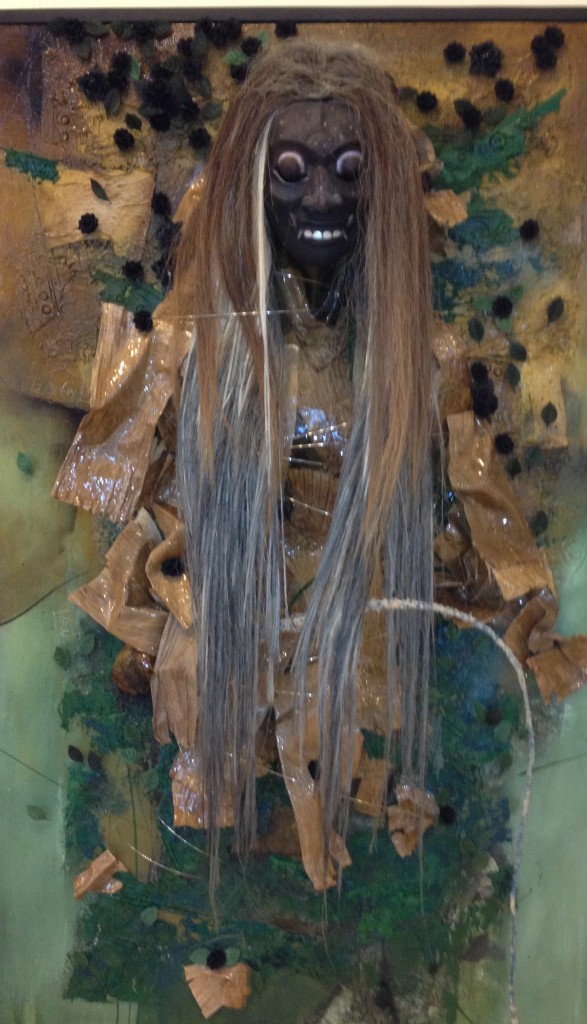 This piece was simply called, For Sale: 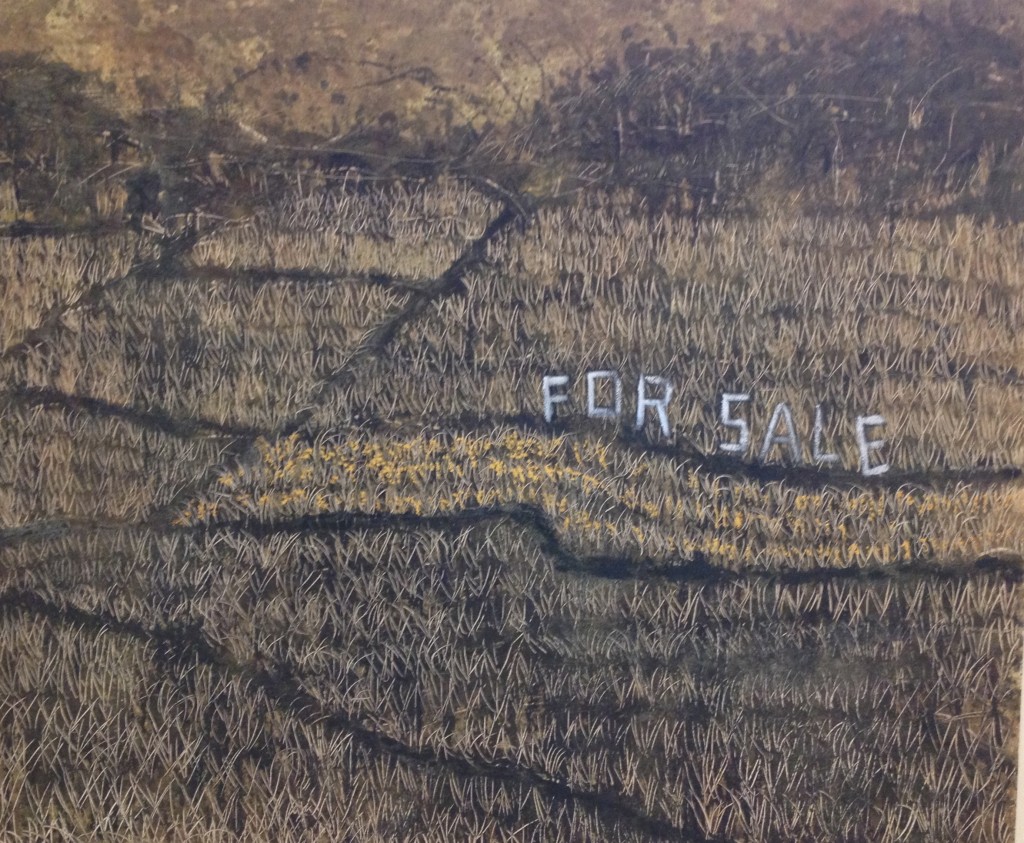 This sculpture of an artist painting what seemed to me to be blood, was called, Say Anything With Love. 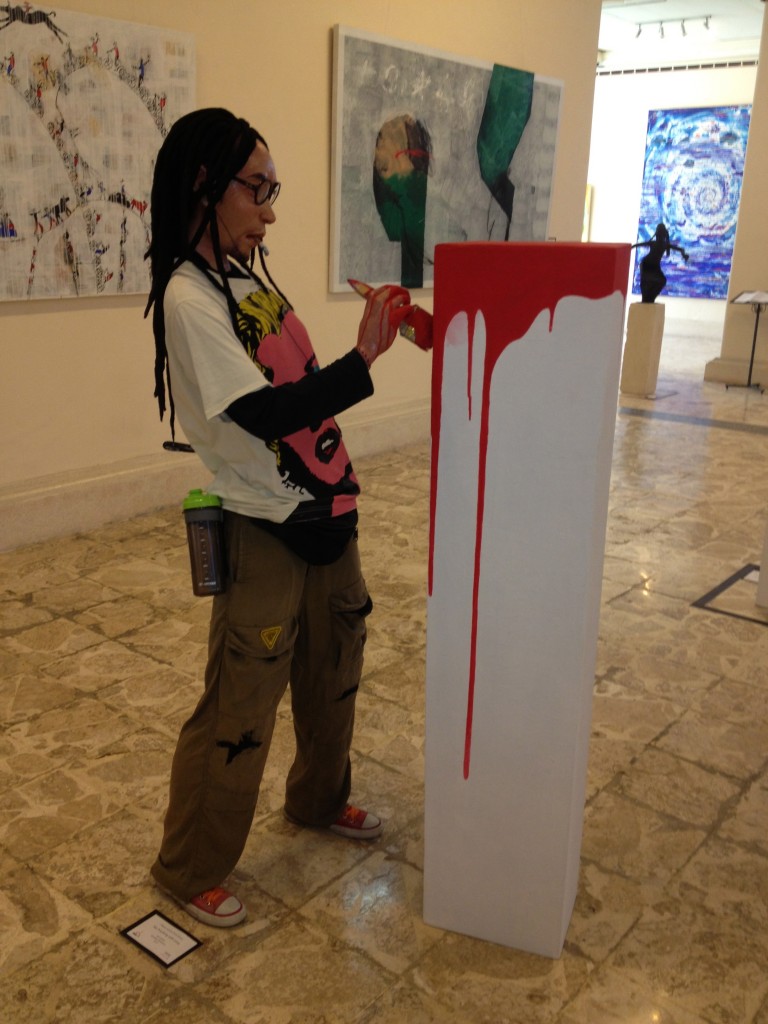 This infant, lying on a cash, was called simply, Money and Baby. 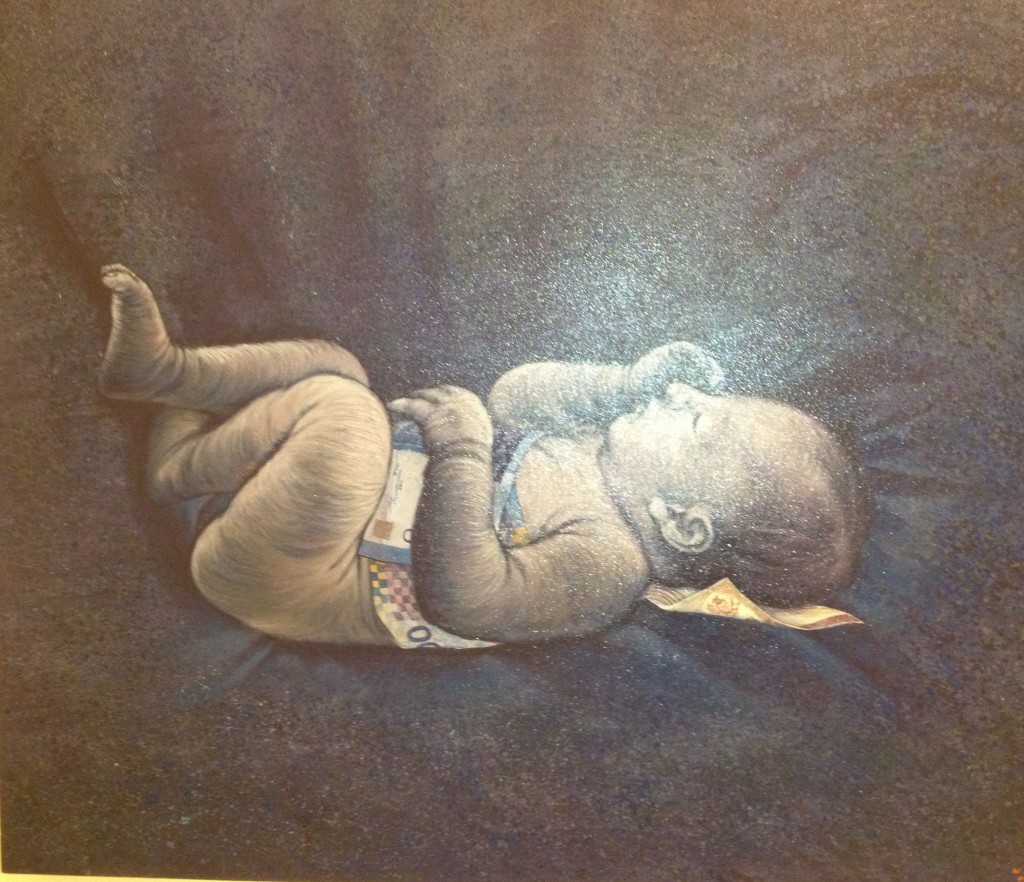 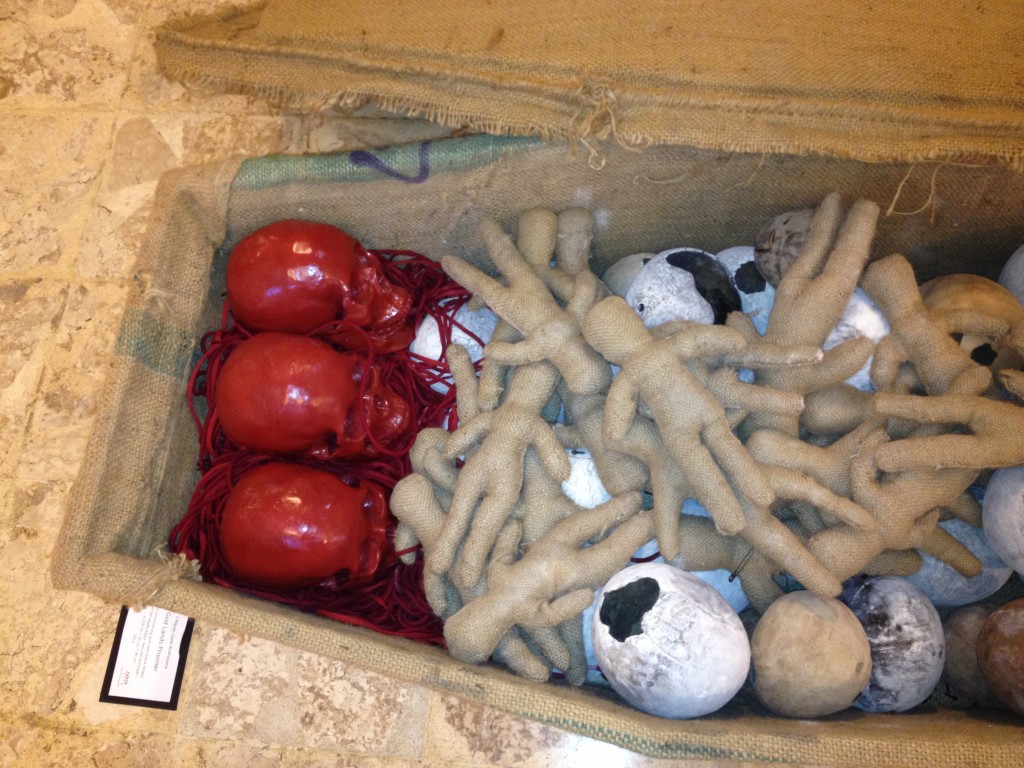 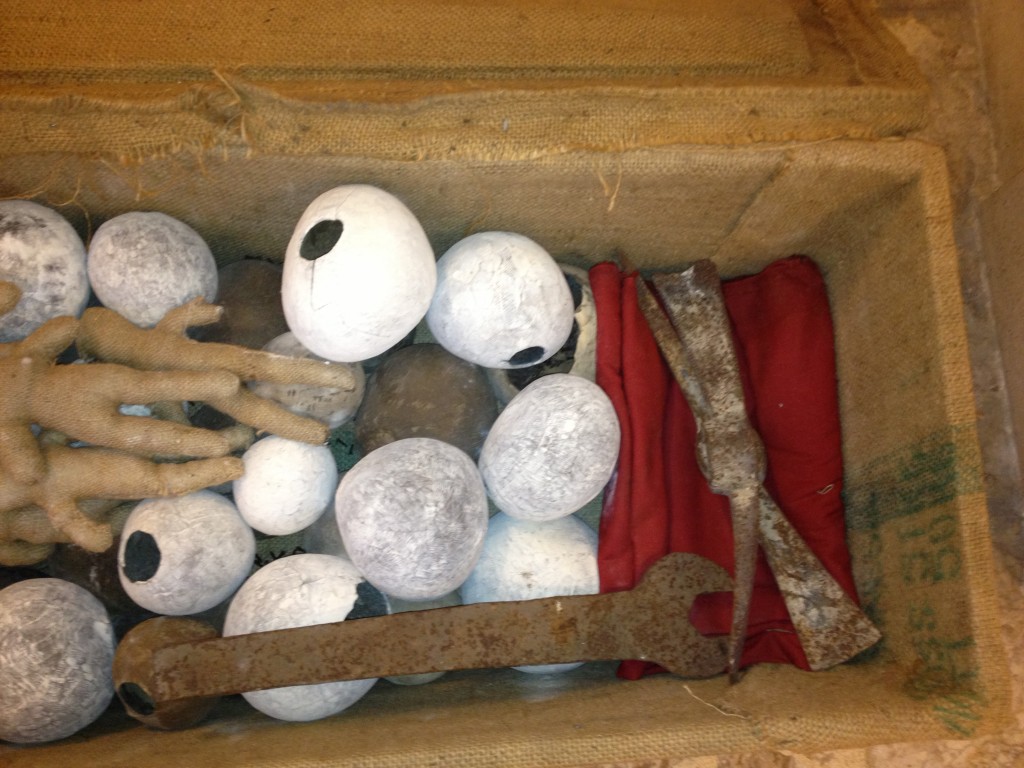 I stood in front of this painting for a long time, I was so drawn in by the compelling nature of the image. It’s called, Warga Negara. The translation, I later found out means something like, “the nationality of your country.” 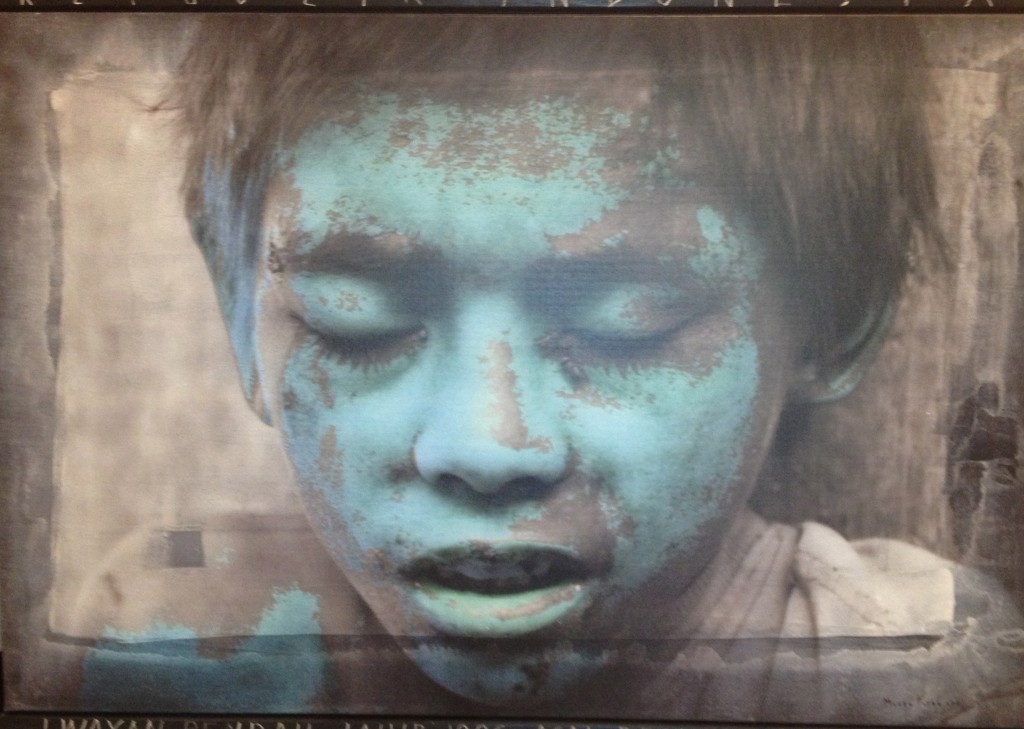 I walked past a piece called Cruel Happiness and came to this one, which seem to mock the stereotype of the smiling Balinese. It was called Smash Gung Ali Like Smash King: 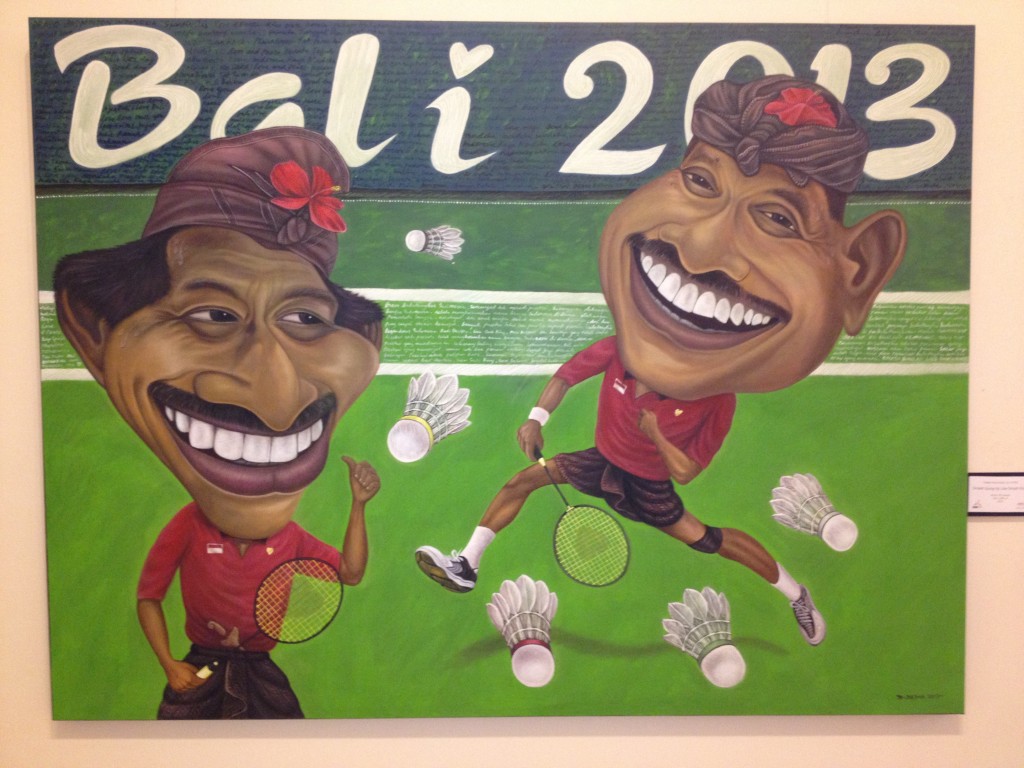 This piece made me sad. It was called Game Over: 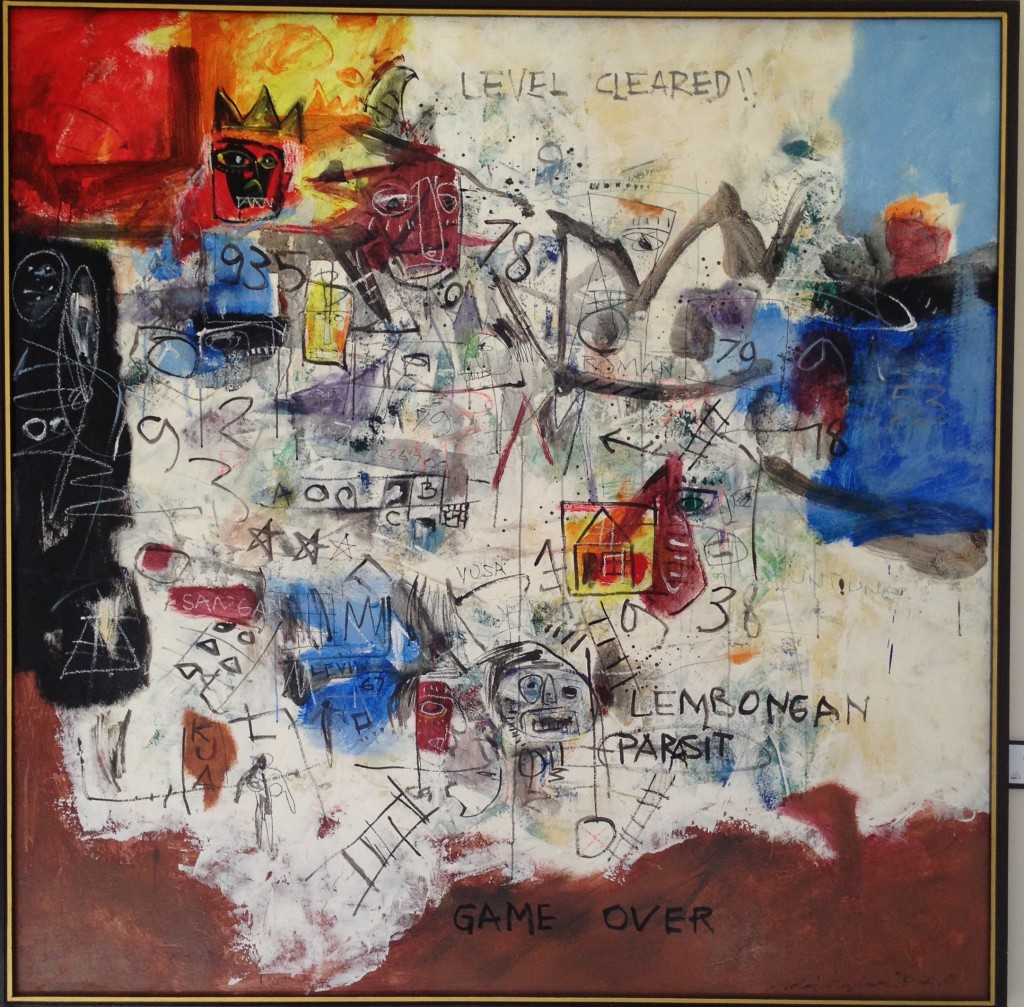 And this painting, called NOT FOR SALE, needed no explanation: 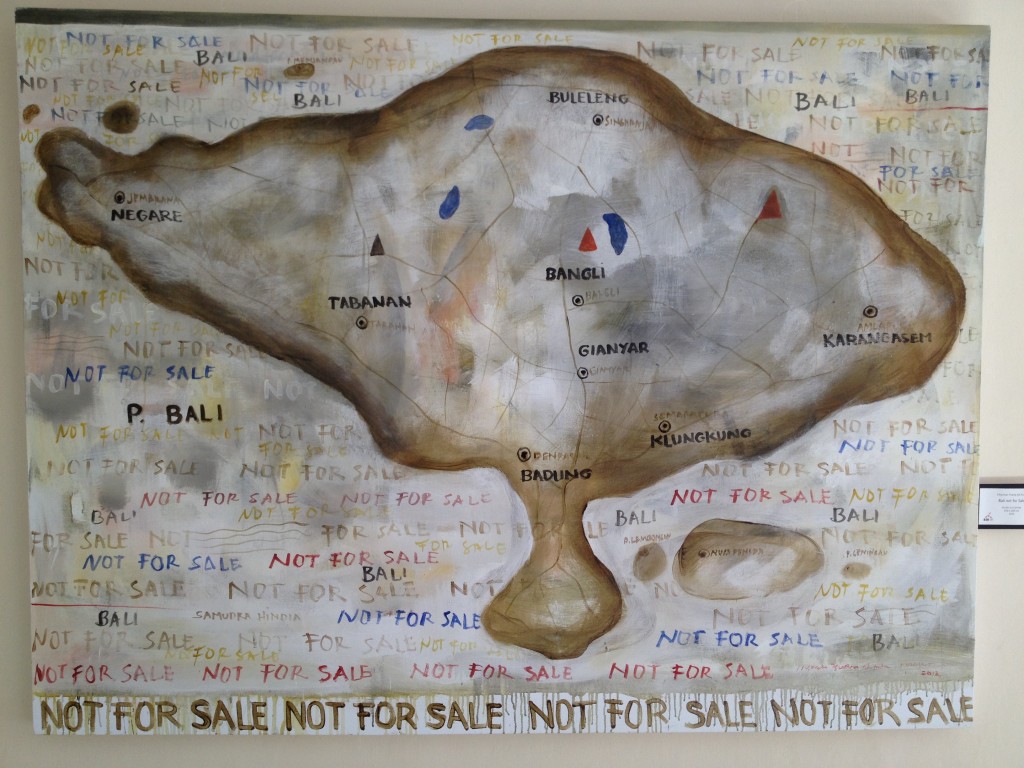 As I moved through the room, I saw that Karyn had joined me. We looked at this painting together; 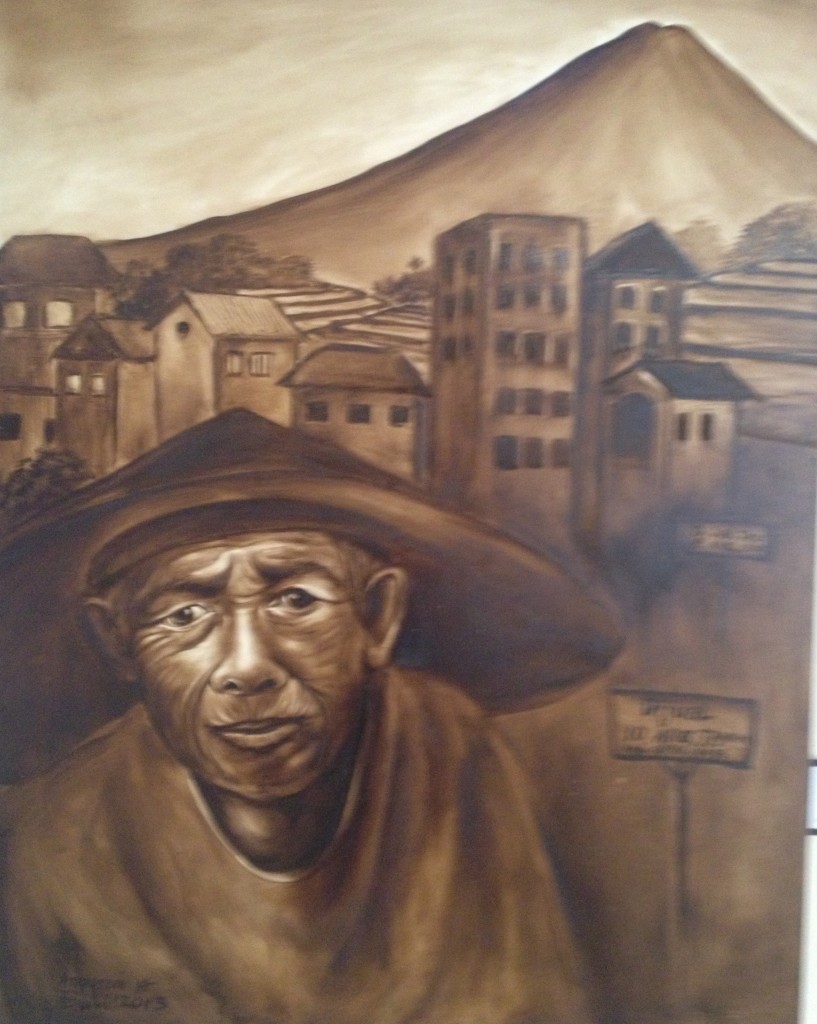 Karyn remarked, “Those aren’t the smiling faces we usually see.” The picture was called, Kami tak punya. Judy later told me it means, “We don’t have.”

The last piece I studied was a long bamboo stick on two levels. The first level  had rice growing out of the top. The second level, directly below, sported a series of hangers, like the ones you find in every tourist hotel. A sign was attached to the side: T Shirt For Sale: Rp 125.000. The title was tempat lagi. On the way to Munduk, our driver told me it means, “We don’t have another place.” In other words, if you buy up our land, we have nowhere to go. 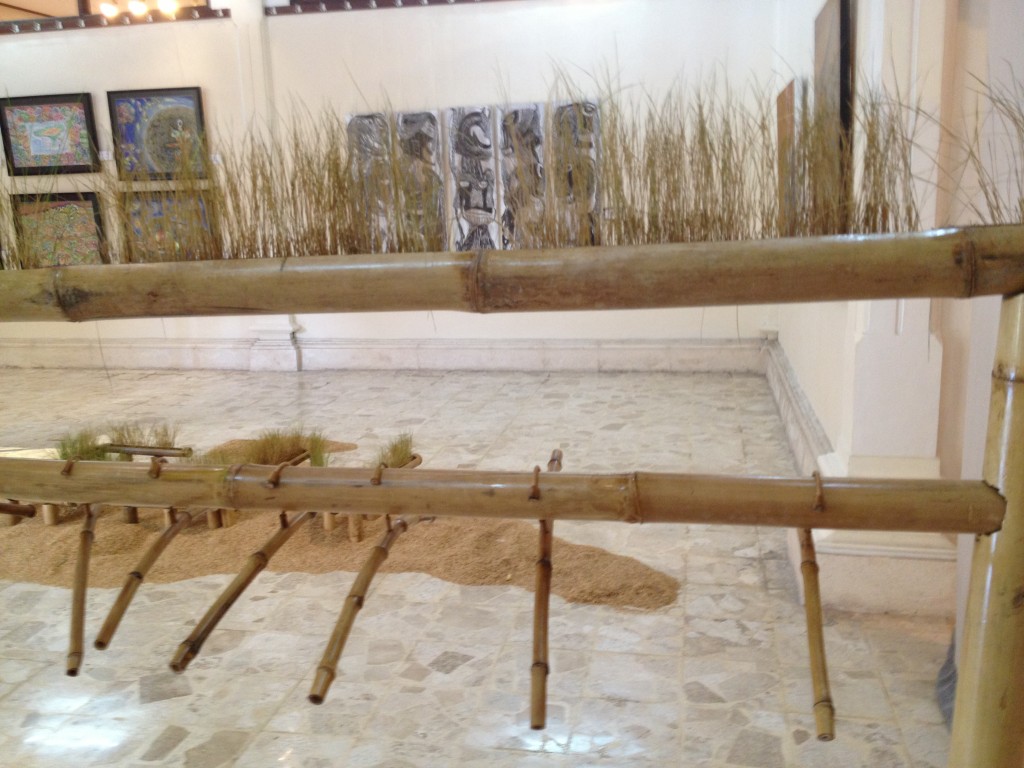 Karyn and I had the exhibit to ourselves. And we were both blown away by the strength of the images and the sentiments revealed in the artwork. I signed the guest book and left sobered and grateful to have seen it, to have peeked beneath the veil of “tourist welcome” and witnessed the rendering of the complex impact of globalization and tourism by these talented artists.

The vast majority of tourists to Bali never leave the highly developed resorts of southern Bali. Few take the time to learn about the people, the religion, the culture and the arts of the Balinese. They take, without awareness, and do not give back. Seeing this exhibit, I was grateful, once more, to travel with Judy and Surya, whose deep love, respect for and responsibility to the people of Bali permeates every aspect of the journey we are on. I see how well they treat everyone who is part of our trip—the drivers, the small local hotels, the artists we visit, everyone. And how they instill in all of us a deep caring for this island, its culture and its people.