After my walk to the beach, I came home to write. Allison and I were going on a bike ride and suddenly the weather report was for rain so it was, “Let’s go right this minute.” I closed my laptop, put on my Keens and met her in the garage. Kevin loaned me his very nice bike and a helmet, and five minutes later, I was following Allison down the street. I hadn’t been on a bike at all in several years, but I’d been working out regularly at the gym and my legs were strong. 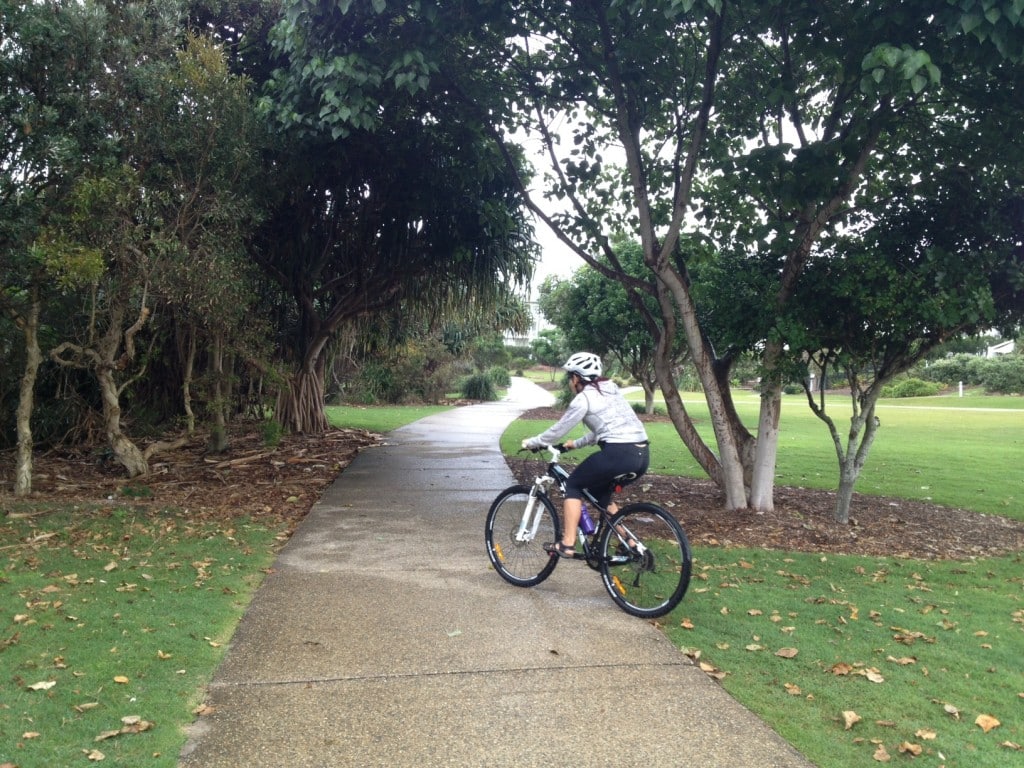 We rode 15K in about an hour and a half. Luckily for me, the whole trip was basically on the flat and gorgeous. 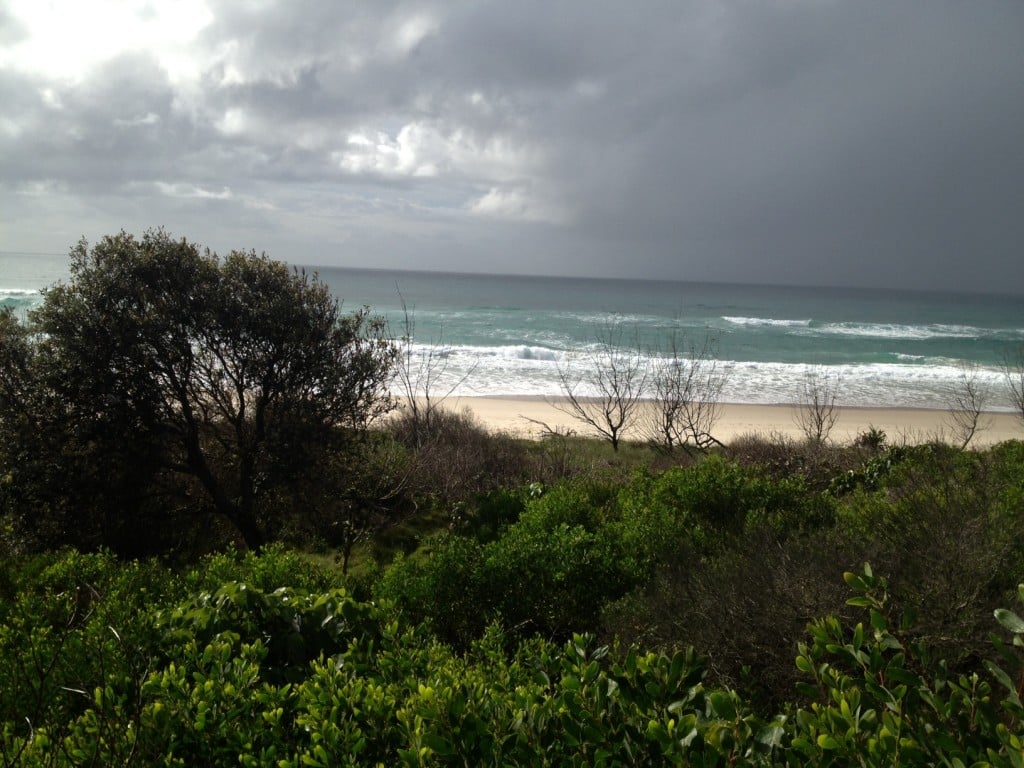 We rode along the beach and through wooded pathways on an endless bike/walking path, much like West Cliff Drive in Santa Cruz, but this bike lane was much longer and went through much more varied terrain. 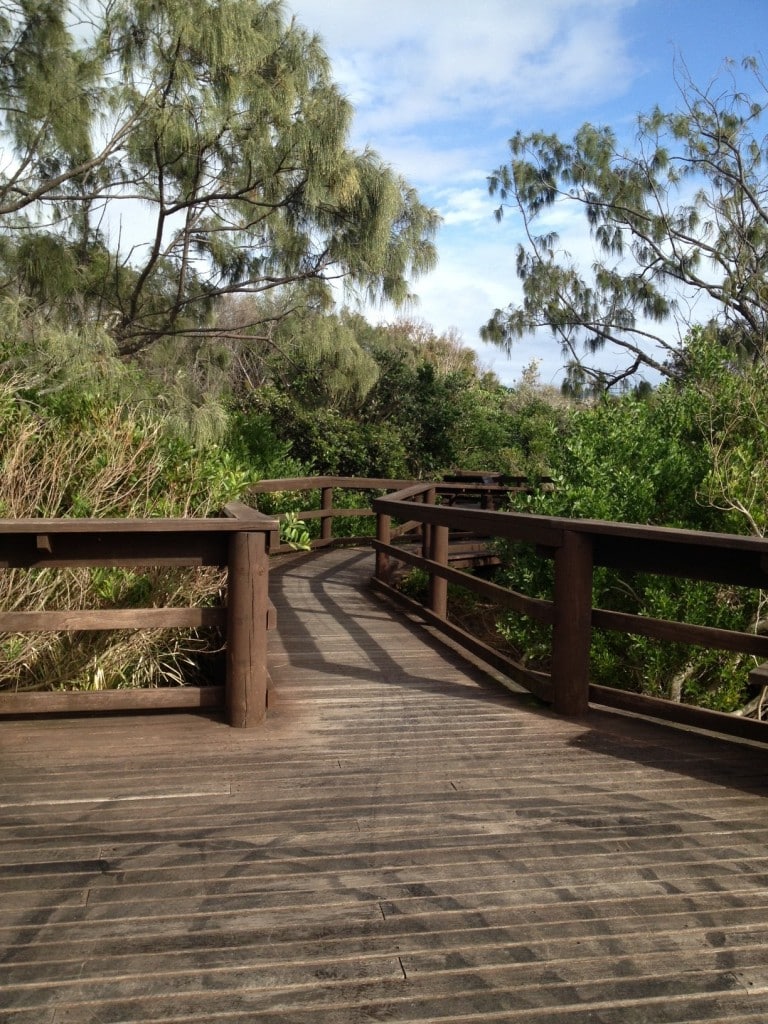 At times it was a flat path, at other times a wooden walkway with railings edging the water. 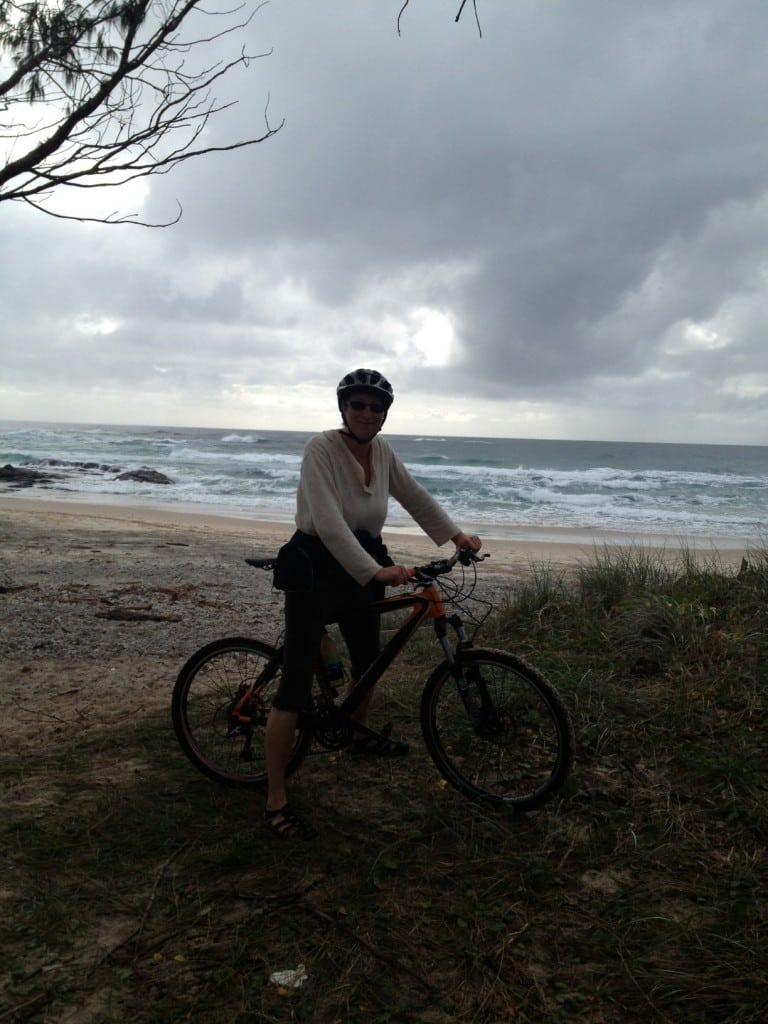 Basically it was the prettiest bike path I’ve ever seen, and coming from Santa Cruz, that’s saying a lot. 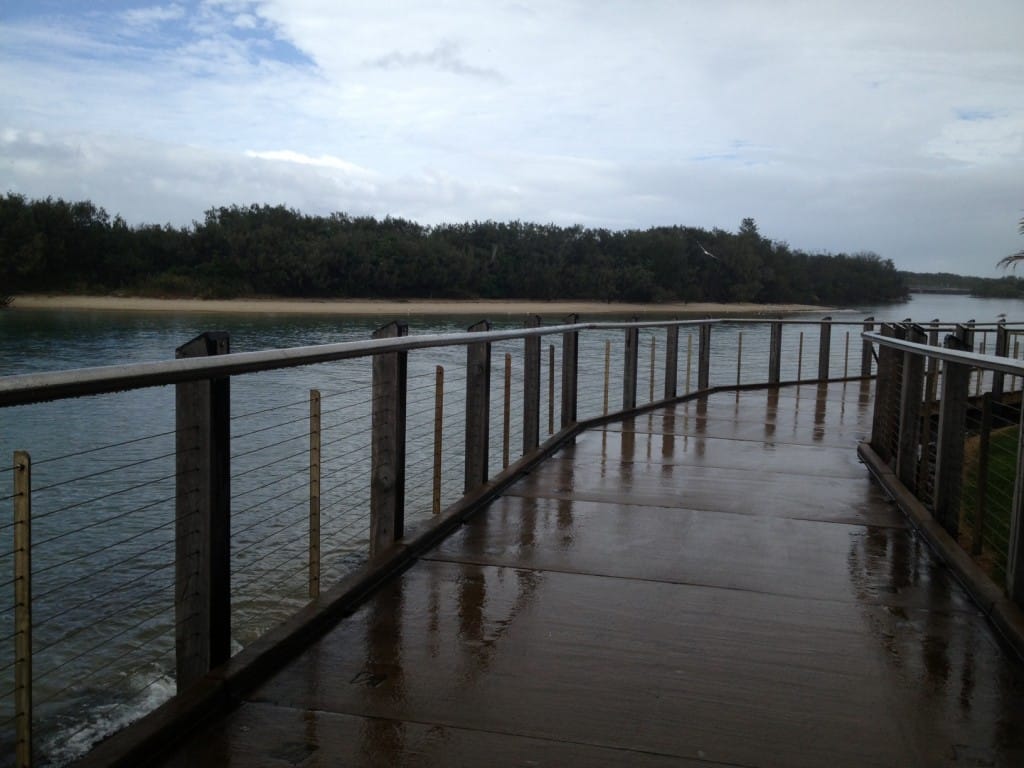 The pathway paralleled the endless beach, just a bit more inland. We rode through sun and into rain, passed through a small town and took in a couple of viewpoints, got soaked, and kept right on going. 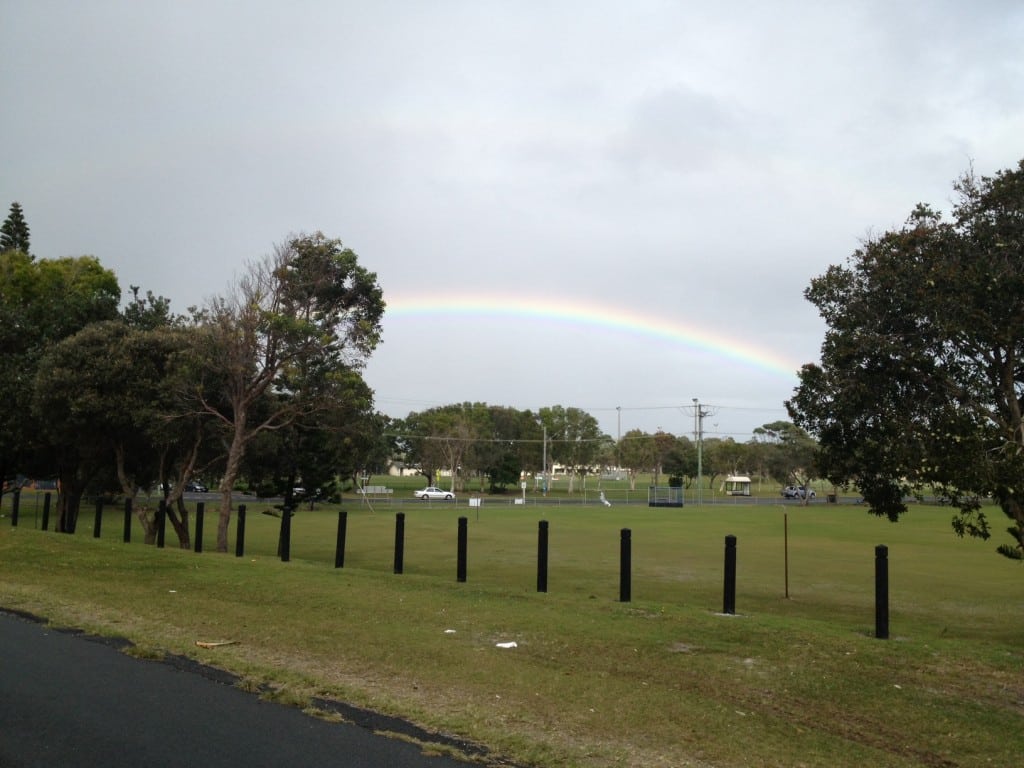 I felt like I was having a good workout, even though the boy’s bike seat was killing me you-know-where, but for Allison, our 15K ride was a mere cruise and at the end of it, when I was feeling well-exercised and very proud of myself (the long walk on the beach and then the bike ride), she said, “Well, I guess I’ll have to get some real exercise this afternoon.” Being physical and working out is a very important part of her life. 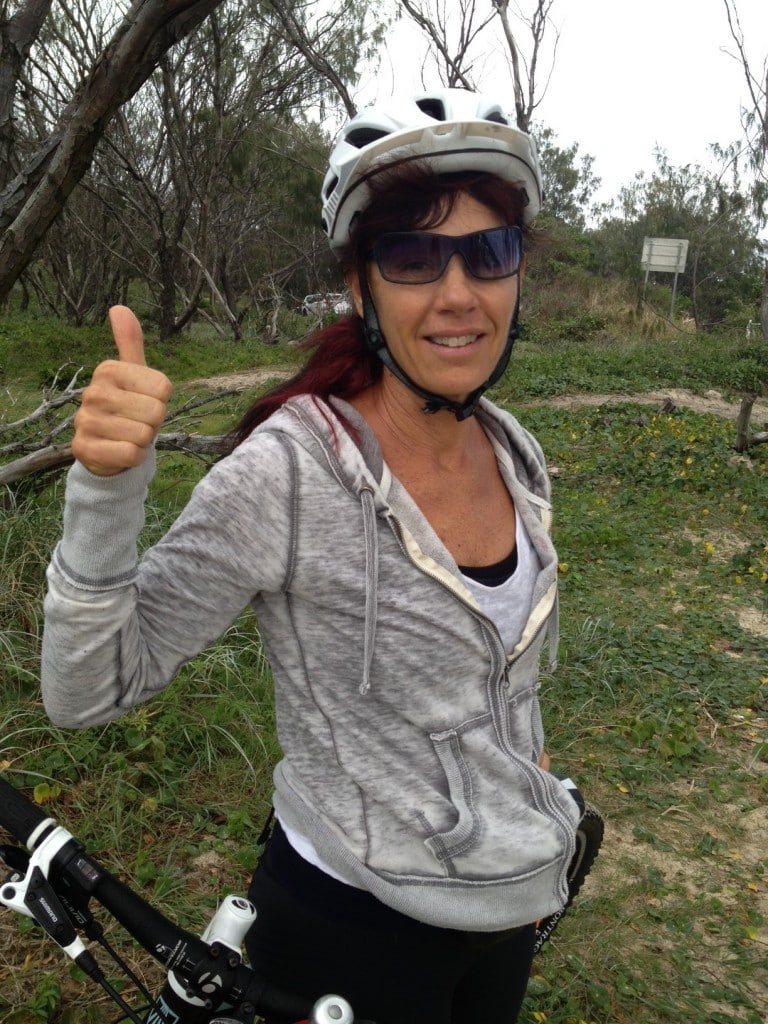 After a quick lunch, Allison drove me out to visit a friend of hers, Julia Williamson a singer, teacher and workshop leader who teaches voice and also uses singing as a healing modality. Allison wanted me to meet her because if I ever come to teach in Australia, she thought that a bit of song therapy would be a wonderful addition to a writing retreat.

Julia’s home was beautiful and spacious and her 16-year-old daughter had recently returned from studying Italian in Italy. Her daughter had wonderful energy and I had a real twinge of missing Lizzy, who will be going on her language learning adventure in Morocco in less than two weeks, and I will not be home to see her off.

Julia served us homemade almond bread with a very special, very expensive honey, native to Australia and New Zealand. Manuka Honey costs $50 for a small jar and is often used medicinally. It was delicious.

I’m sure it may just be the two people I’ve visited, but my very tiny sample of local people here are that they are very focused on healthy eating, more so than most people I know in Santa Cruz. It may also be this area of Australia, which has quite a Santa Cruz vibe to it in terms of healers, alternative therapies, healthy diets and the like. There is something that feels very familiar, yet very different about this region of Australia.

Back at Julia’s, we did some kind of divining card I’d never seen before and the message from mine was basically to let go of the masks I carry. Then she set me up with a foot wiggling machine, the Chi machine, a passive aerobic exerciser, something I’d never seen before. Basically you lie down on the floor, put your ankles in two slots in this very heavy little machine, turn it on and it wiggles your entire body as you lay there. It felt very good, very relaxing, but I was only allowed two minutes because I’d never done it before and apparently it is very powerful therapy.

On our drive home, it was pouring. Allison and Kevin had invited some of their closest family friends over for a barbie, and so we came home and started to cook. I was the sous-chef, and spent an hour finely chopping garlic, onions, and all kinds of vegetables. Allison and Kevin made chicken burgers and a great green salad. Then we made a salad from of something I’d never heard of before, a ancient grain that has come into vogue here that is supposed to have all kinds of amazing healing properties: freekah. Freekah is a roasted green wheat that was first named in the Bible. Like quinoa, it is considered a high protein super food. The freekah looked like wheat berries and though it was supposed to take 45 minutes to cook, we ended up cooking it for two hours. When it was finally done and mixed with the vegetables, parsley and some very special goat cheese and a pomegranate dressing Allison whipped up, it was delicious.

Our dinner party included two Aussies, two Kiwis (from New Zealand), two American ex-pats and me. I found the company to be open-hearted, warm, fun-loving, and delightful, and they embraced me wholeheartedly. The food was delicious (I especially loved the lamb sausages—I normally don’t eat much meat, but I’d heard about Australian lamb and just had to taste it). Actually, everything was delicious. There are no hormones or other crap added to any of the meat in Australia. Basically you can buy anything and you know it’s going to be healthy.

Throughout the evening, I had a little piece of paper by my side and I jotted down some of the unfamiliar phrases I heard peppered in people’s speech:

Shoulder season: fall and spring, basically the months leading up to winter and summer

Redundant: when you’re laid off, you’re made redundant

Ring up: to call someone

What I learned about chemists is this: each Chemist has a pharmacist (called the chemist), but they also have a naturopath on duty. So if you don’t want to take western drugs for your sickness, you can ask to talk to the naturopath and describe your symptoms. The naturopath will ask you a few questions and then custom-make you a tonic or herbal blend for your illness and hand it to you right then and there. Can you imagine?

After dinner, at 7:30, when I’d been yawning for quite a while, Allison announced that we had to watch the semi-final episode of The Voice (Australia). We all piled onto the couch to watch the final eight winnowed down to the final four.

We all agreed that 18-year-old Harrison Craig is going to be the final grand-prize winner next week. In interviews, Harrison has an awful stutter when he talks, but just listen to this baby-faced angel sing his final song, an original composition, More Than a Dream.

After the show, Allison and Kevin’s friends left, and I hugged each and every one of them with real pleasure and affection. Aussies and Kiwis are very easy to like, very personable and warm. And when everyone headed for their cars, we (the hosts) went out to the street to wave goodbye. That’s just one of the wonderful things they do here. They do it in Bali, too.

I feel so incredibly fortunate to be a guest instead of a tourist. My experience here is completely different than it would be if I were staying in a hotel, trying to figure out what to do and see on my own. I’ve gotten to meet local people on an intimate basis, not as wait people in restaurants or clerks in stores. And I’ve found them delightful.

Throughout the evening, I kept thinking, I’m just starting to get a feel for this place and I only have one more day here. I’m only seeing one tiny corner of this huge, varied country. I guess I’ll just have to find a way to come back.