The first thing we noticed while we were eating breakfast on the 11th floor of our hotel this morning was that the tiny people down below on the street were all wearing ponchos or holding umbrellas. It was raining. We dressed for the weather, grabbed umbrellas and headed out on foot. The second thing we noticed the moment we hit the street was how clean and refreshing the air felt; the rain had washed all that grime and diesel right out of the air. I felt like I could take a full breath of air without risking my health for the first time since I got to Hanoi. The atmosphere felt…actually refreshing.

The moment we reached the sidewalk, we were in a sea of ponchos. They were everywhere. The preferred rain gear for the Vietnamese, in order of priority seemed to be: 1) very thin, brightly colored ponchos, 2) conical peasant hats, and 3) umbrellas. 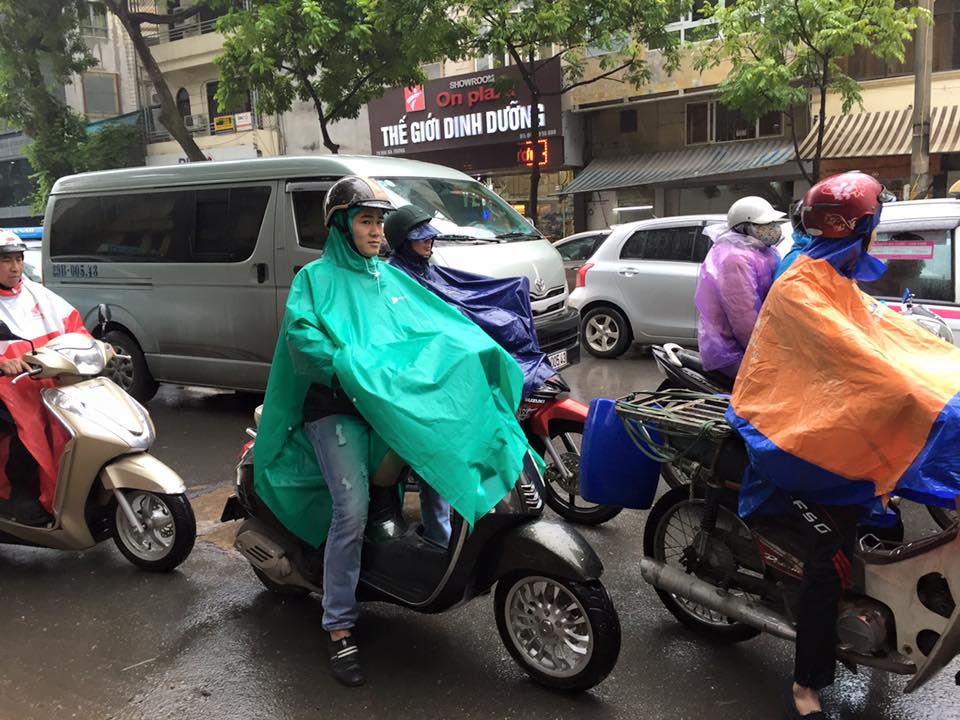 Joanie noted right away, “Commerce doesn’t stop in the rain.” And she was right. Everyone who’d been out on the street selling yesterday was out selling today, only now, not only the seller had a poncho on; the merchandise did, too. A scooter passed in front of us with three HUGE bunches of yellow balloons looming over from the back of the bike, and each cluster of balloons was wrapped in plastic–along with the driver and the bike. 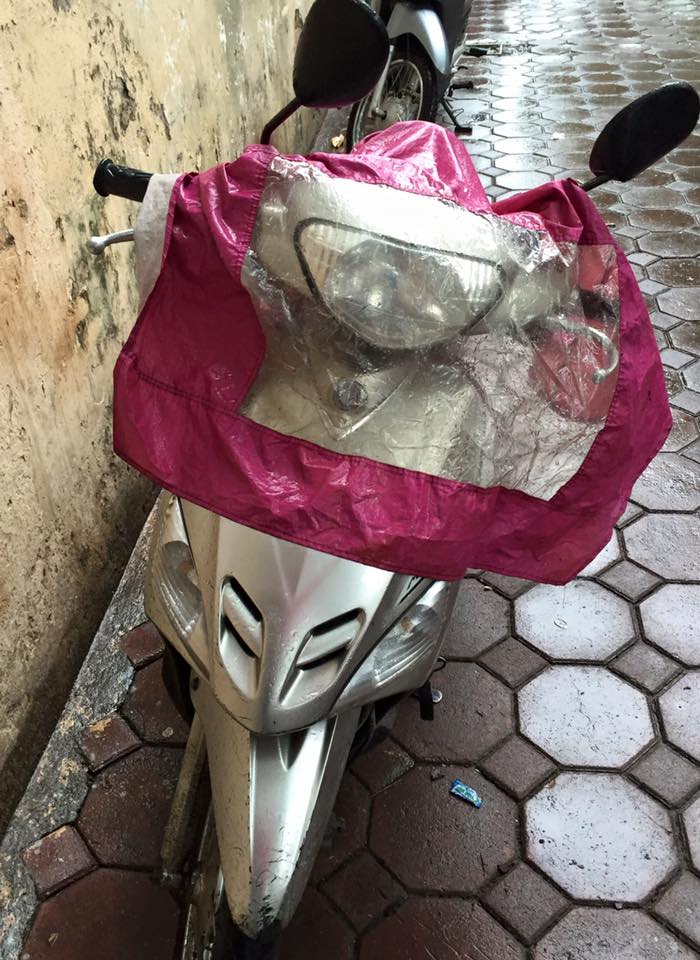 Our morning destination was Hao Lo Prison in the Hoan Kiem District. It’s a prison that was built by the French in 1896 to hold Vietnamese prisoners. It was later used by the Vietnamese to hold American Prisoners of War during what the Vietnamese call, “the American War,” including their most famous detainee, senator and former presidential candidate, John McCain.

Part of the old prison has been turned into a museum. The most notable characteristic of the prison, as far as I could tell, was its blatant Communist propaganda. According to one of the placards that line the display rooms, the French built the prison “to detain thousands of Vietnamese patriotic and revolutionary fighters.”

There were dozens of photos with captions like these:

“The dark and cold Hoa Lo Prison of the French colonialists could not prevent the patriotism of political prisoners. Surviving arduous years in the prison, they returned bravely, fighting to achieve the Dien Bien Phu historic victory together with soldiers and people across Vietnam.”

“Being detained for long, most soldiers became exhusted (sic). In order to escape from the prison, they should remove the shackles from their legs to exercise and gain energy. Prisoners successfully used cloths impregnated with lard or burn the wood to expand the shackles. To avoid detection by supervisors, shackled holes after being expandd (sic) shall be disguised by lamp soot mixed with grease…”

The path through the prison led us into several cell blocks. Cell Block D had some creepy movie piped in to the display area, kind of like a horror movie soundtrack. And it featured the actual front door of the prison. 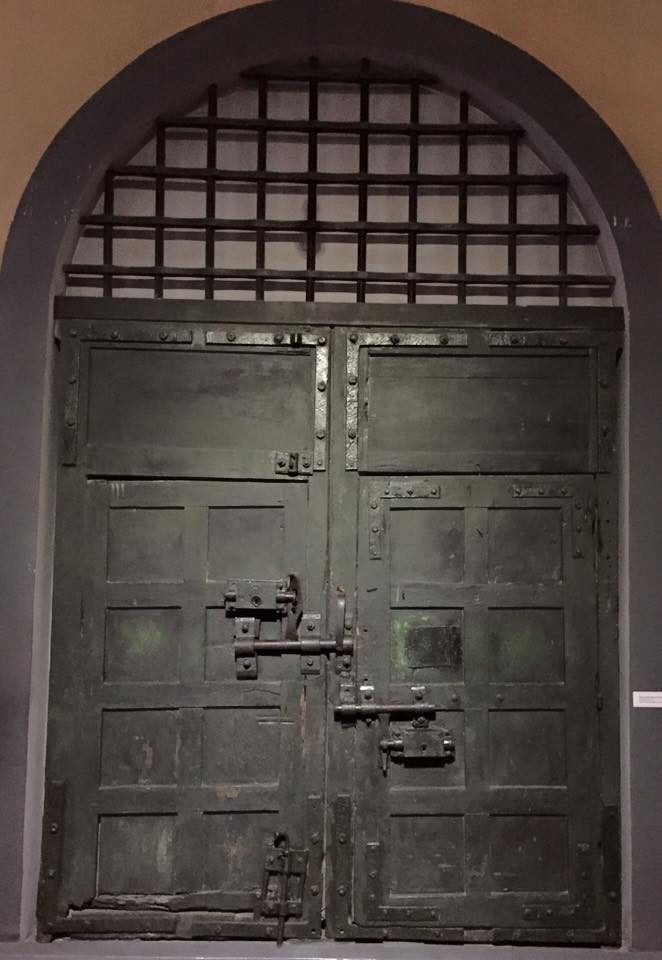 A second cell block was full of wooden manikins of Vietnamese prisoners on long platforms, sitting on the ground with their legs shackled in front of them, keeping them from moving. And then there was the cachot or dungeon. This is the “hell of the hell” for people who “broke the rules of the prison.” The dungeon rooms had a dark wood door with a barred peephole and a huge bolt and lock. Inside in the dim light, in a tiny space, was a full-body size manikin of a starving prisoner with his ribs sticking out, shackled to the ground. 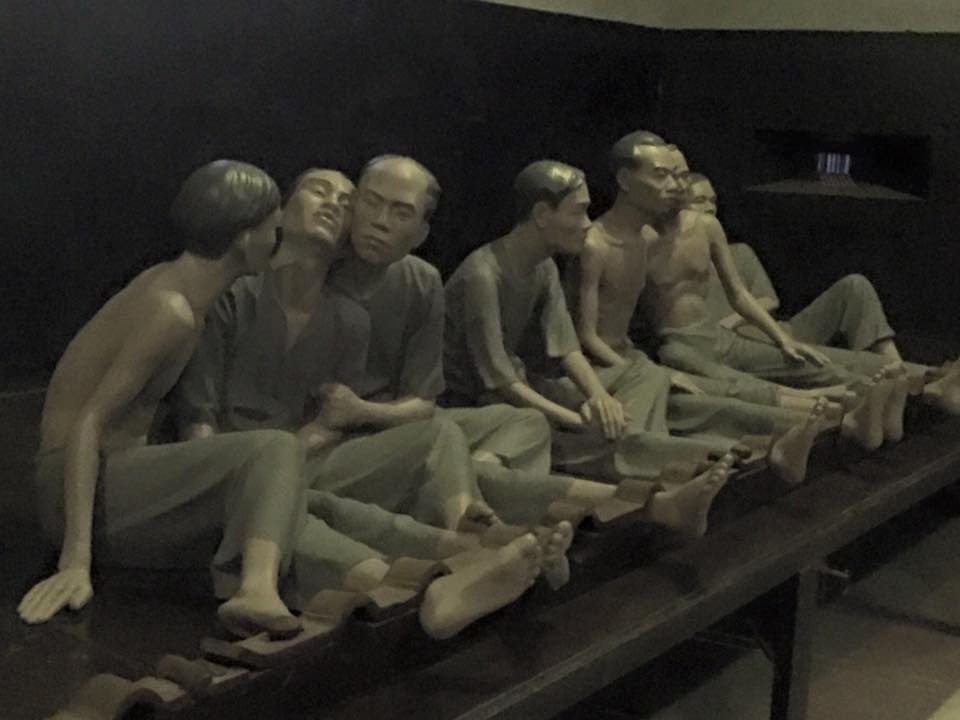 In one of the hallways was a series of old black and white propaganda posters featuring people from Moscow, Australia, France, China, Britain, Cuba, Japan, Poland, and Sweden, all protesting the U.S. war against the Vietnamese. A second poster showed American protesters against the War, including two mothers throwing away the medals and decorations of their sons who had been killed on the battlefield and an article about a 22-year-old young American man who immolated himself on November 9, 1965 in front of UN Headquarters to protest the United States invasion.

For propaganda value alone, the rooms I found the most fascinating were the two rooms set up to “tell the story” of American prisoners of war at Hoa Lo Prison. The first showed pictures of bomb craters and the devastation caused by American bombs. Each photo included numbers of atrocities and casualties. There was a video playing in a loop in this room which had a soundtrack of air raid sirens, bombs, haunting music, and it featured images of more atrocities. There was even a chart in this room dedicated to POWs entitled, “Achievements of Shooting Down US Airplanes,” including the number of planes of each type (F4, B52, F111) that had been shot down, when and where.

A black and white photograph showed John McCain being pulled out of Truc Bach Lake on the day he was captured. Next to this, a glass case displayed John McCain’s parachute, shoes, flying clothes, raincoat and life jacket. And beside the display of his belongings was a giant flip book showing photos and statistics about all the American pilots who had been shot down and captured by the Vietnamese. 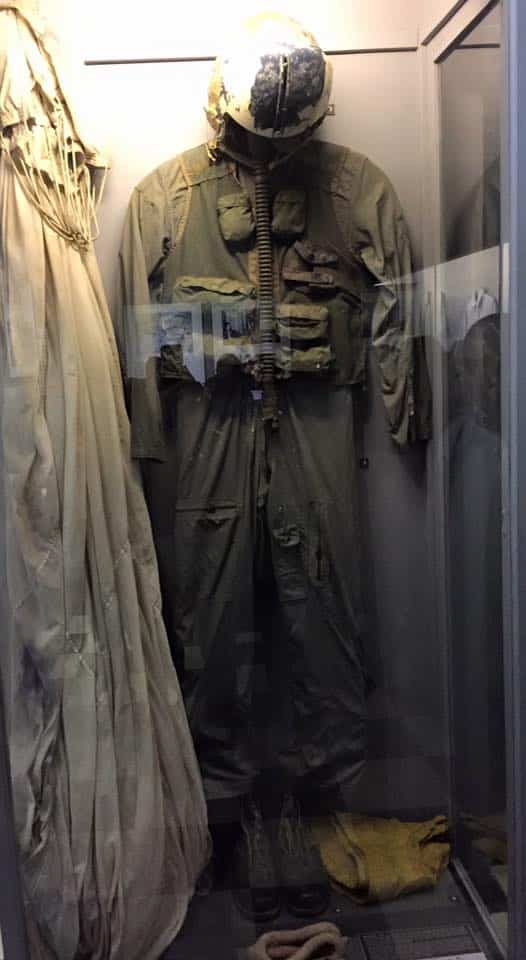 Across the hall, the second room dedicated to the American POWs was filled with pleasant flute music, a complete contrast to the discordant sounds in the room across the hall. It showed POWs making their Christmas meal and decorating the prison for Christmas. We learn that their “privacy and personal time were respected” and in carefully staged photos, we see them drinking tea, smoking cigarettes (one even smoking a bong), singing in religious services, and eating generous meals. A video that describes how well they were treated assures museum goers that all the pilots “came to all understand that the war was unjust.” It included narration like, “They were so lucky to be prisoners of the Vietnamese people,” and “All of them experienced and deeply appreciate their humane treatment.”

Another display case showed the variety of sports equipment readily available to the POWs: cards, a wooden checker set, billiard balls, a volleyball net and even a guitar. We see photos of the pilots meeting with journalists and receiving letters and packages from home, including this carton of L&M cigarettes:

A poster shows the POWs getting prompt, appropriate medical treatment, including John McCain. The picture of McCain has the caption: “Army doctors treating a wound for John McCain an American pilot arrested at Truc Bach Lake Hanoi on 26th October 1967.” 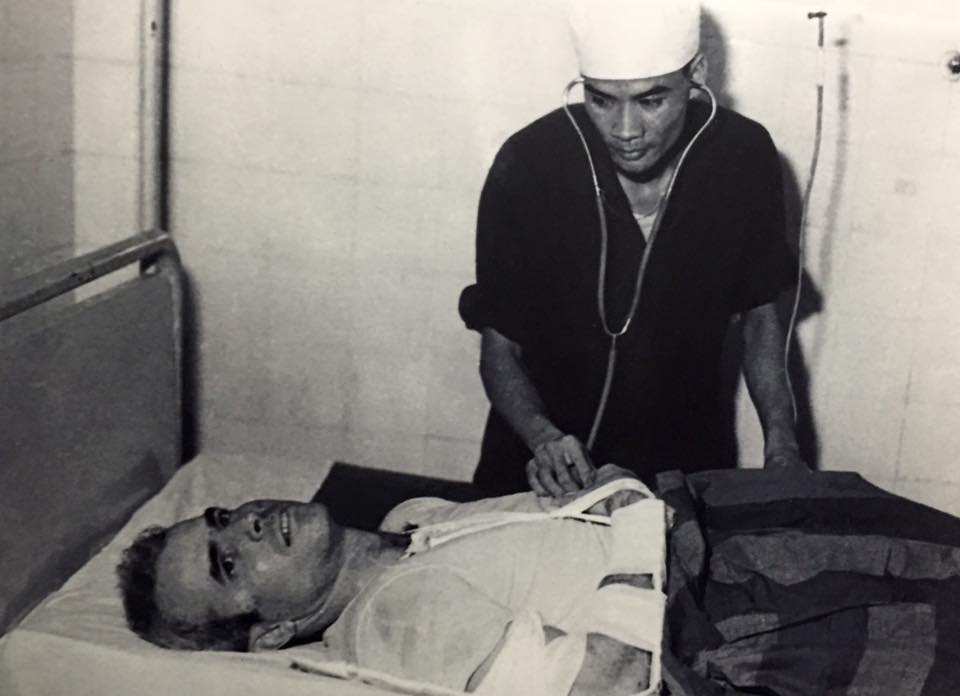 The pilots in these propaganda photos look healthy and fit. We see them playing basketball and volleyball, tending chickens and cultivating trees. They look smiling and happy. 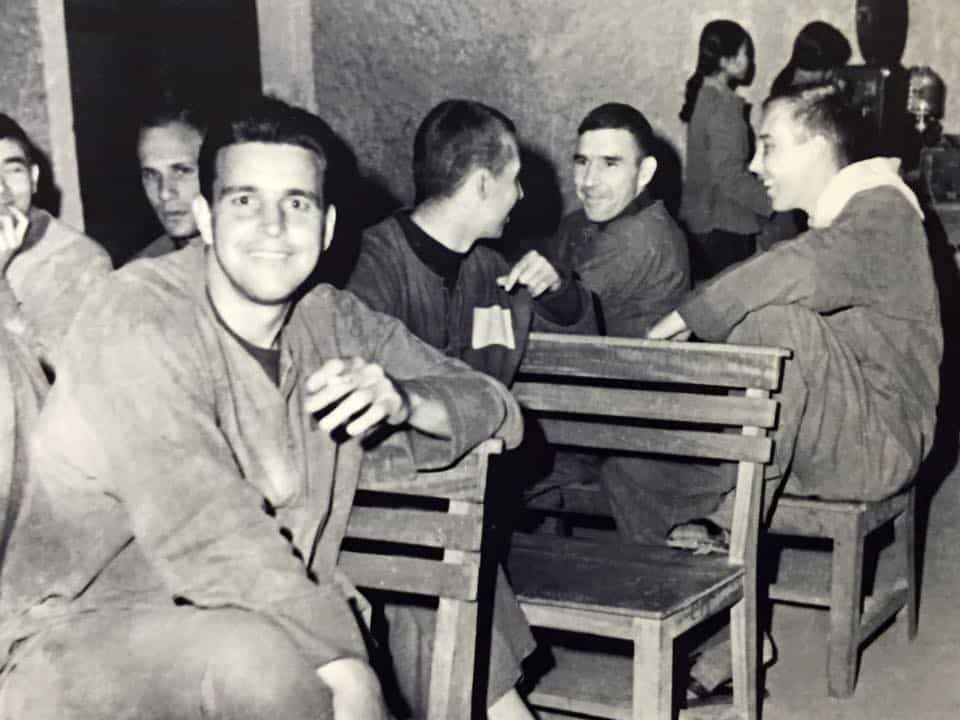 The final display case in this room shows the new clothing, overcoats, leather travel bags and beautiful shoes the pilots were given as going-away gifts before they were released in 1973.

I read every word in these rooms, and so did Joanie. We were mesmerized by the audacity of this obvious propaganda. It was a stunning display of wartime dissembling. And it stayed with us. When we finally got back to the hotel at the end of the day, Joanie got online to read John McCain’s account of the real conditions in Hoa Lo prison in which he described being kept in a room with an inch of water on the floor–no medical treatment whatsoever–being forced to pose for “happy” photos in a beautiful white bed under perfect conditions. But as soon as the photo shoot was over, he was tossed right back into the horror he’d been living in.

On our way out of the museum were two very striking murals (made of concrete of all things), both entitled, “Struggle Against the Enemy’s Terrorism” by Nguyen Phuc Tung. They told history from the Vietnamese point of view. 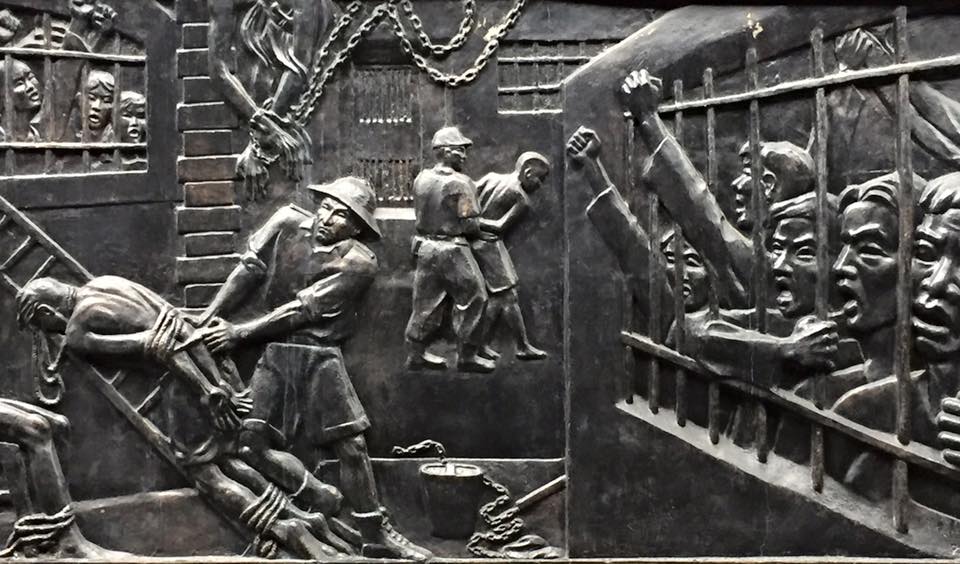 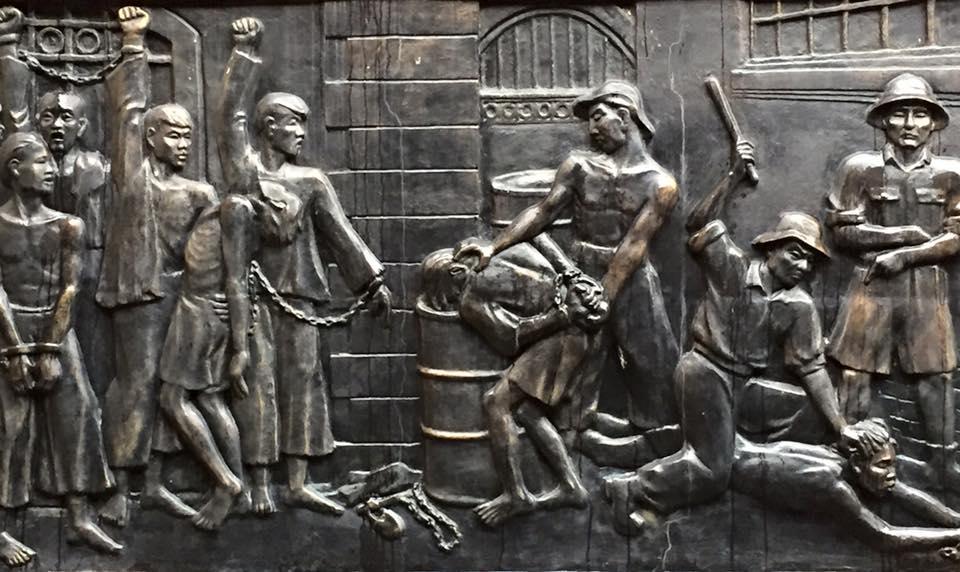 Visiting the Hanoi Hilton (the nickname given to this prison by the Americans held prisoner there) made me reflect on the way the US also has a long history of disinformation campaigns to start, foment and rationalize our wars, overt and covert. Countries all over the world strategically objectify the enemy and use propaganda, a staple tool of war. It just takes different forms.

As we walked away from the prison I said to Joanie, “I wonder what modern day Vietnamese think of this museum and its propaganda messages.” That’s one of the first things I’m going to ask Quynh, our local guide, when we meet tomorrow morning to get ready for the arrival of our group members later in the day. And then my freewheeling vacation with Joanie will end…and our Write, Travel, Transform adventure will begin.

I definitely hope to keep blogging, but my posts may start getting shorter. I’m going to be busy!

4 thoughts on “Vietnam: A Rainy Walk To The Infamous Hanoi Hilton”